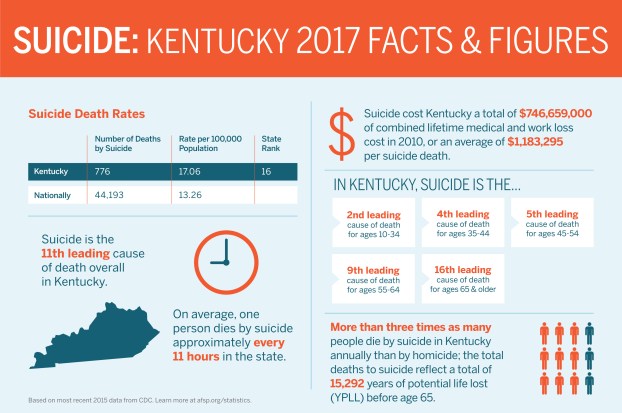 The number of sixth-grade students who had attempted, considered or made plans for suicide has increased since 2014, according to the Kentucky Health Child Fatality Review Annual Report and a recent release from the Jessamine County Health Department.

“It is very important to educate everyone regarding warning signs and factors of suicide,” JCHD Director Randy Gooch said. “Anyone who has experienced this in their own family will tell you those signs are not readily apparent and individuals who are experiencing self-harm and suicidal ideation masks this very well until it’s too late for help.”

According to the data released, the number of Kentucky youth who have died by suicide between the ages of 10 to 17 has doubled.

Sixth-, 10th- and 12th-graders showed an increase in attempts, making plans or seriously considering suicide in a recent study compared to other years

Eighth-graders were the only group who showed a slight decrease compared to other grades in those three categories.

At the national level, suicide is the third leading cause of death for young people ages 10 to 24.

In Kentucky, that number is higher with suicide being the second leading cause of death for youth in that age group.

“The school system is a great partner in our work groups as they are dedicated to educating their staff to become more aware of students who may be showing warning signs that need the attention of mental health professionals,” Gooch said.

For those outside school, there is still help.

Lyrical Healing will host a Mental Health First Aid Class March 10 at the Jessamine County Health Department, located at 210 E. Walnut St. The cost is $25, and the course will address how to identify, understand and respond to signs of mental illness and substance use disorder in the community.

“The Mental Health Workgroup has submitted a grant for funding to allow three individuals to attend a Train-the-Trainer for Mental Health First Aid,” Gooch said. “This will allow for more trainings to be conducted within the school system and community at-large for awareness and intervention.”

The Mental Health Workgroup is also working to put together a community education series this spring and summer, which would address understanding adverse childhood experiences, substance abuse and addiction and suicide and depression.

“This is an evidence-based program that uses peer leaders to enhance protective factors associated with reducing suicide at the school population level,” he said. “Funding for this will come from the support of the KY Suicide Prevention Enhancement Site.”