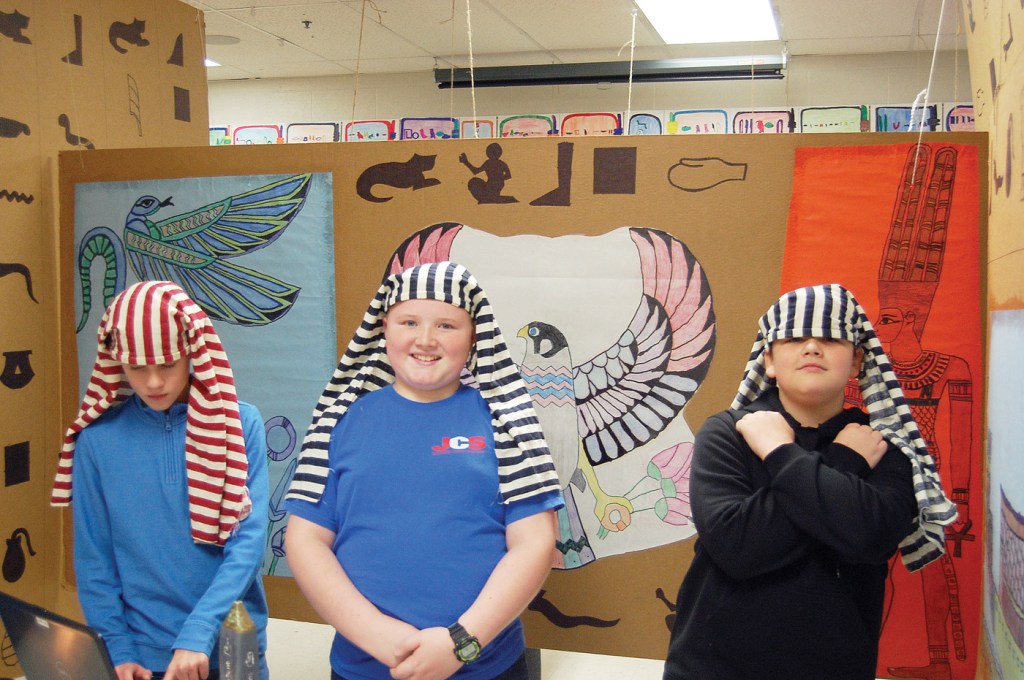 For the Jessamine Journal

Sure, we talk about it and teach it, but thanks to a hardworking teacher at West Jessamine Middle School, history was recently “brought to life.”

For a few exciting days this month, room 248 is divided into five sections of Egyptian beliefs and history. There’s the pyramids, tomb robbers, mummification process, weighing of the heart (judgment to get passage into the “perfect” afterlife) and the famous King Tut.

“To me, it brings history to life for kids,” Carnes said. “For example, instead of just reading about it or watching a video on King Tut, kids get to become the Pharaoh, or Howard Carter or Lord Carnarvon.”

Seventh-graders perform in the tomb and teach the sixth-graders about the Egyptians.

Students start practicing their script for their desired part a couple weeks ahead of time. Participants enter the classroom through a tunnel and work their way through a maze that leads to different sections.

At each section, students perform and teach various things about the tomb.

Carnes said she got her inspiration for the tomb when she was substituting. A teacher did something similar, but more like an expedition, she said. Initially, students made their own scripts, had little props, and the dividing sections were made out of rough cardboard and hodgepodge.

Now, the project has evolved into an abundance of props including, costumes and headpieces. The walls are sturdy cardboard decorated with hieroglyphics and the scripts are made by Carnes.

“It’s a lot of work, and it’s a lot of stress but it’s worth it for what the kids get out of it,” Carnes said.

A lot is invested in the tomb, Carnes said. In a short time the posters all around the room must be taken down, the Egyptian-style paintings and artwork must be hung for aesthetics, all of the tomb walls must be hung, the tunnel must be assembled and the many props must all be in place.

“For me, the best part is seeing kids get excited after their first performance, especially those who are afraid to do it,” Carnes said. “It’s important to me because kids get to truly experience it in a way they never really have.”