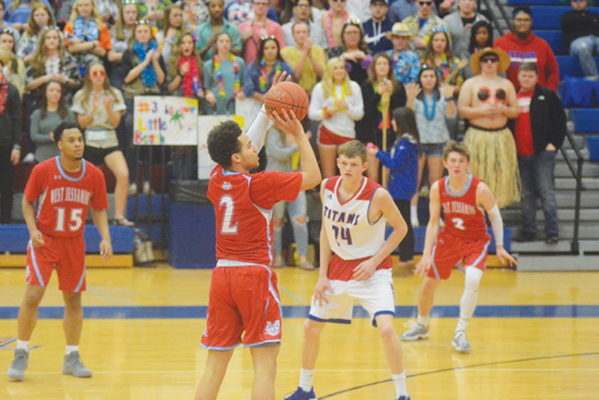 Braeden Fomas shoots a three in the first half of West Jessamine’s 54-51 loss to Mercer County. The two teams have split the regular reason meetings 1-1. (Photo by Micah Satterly)

The West Jessamine Colts faced a tough challenge on the road against the Mercer County Titans Friday and couldn’t close the three-point deficit as the Colts fell 54-51.

Both teams struggled to get the offense going as West scored only four points in nearly five minutes of play all from free throws.

Mercer started to heat up and drained two threes on back-to-back possessions to stretch out a 12-4 lead and West called a timeout with 3:10 left in the first.

One minute of game time later, head coach Damon Kelley had seen enough from his starters and put a new rotation on the floor.

A last second three from Mercer added to the lead 17-7 after the first quarter.

The starters found their way back in the rotation a minute into the second quarter and picked up the slack.

Mercer held firmly on the lead 41-31 heading into the fourth.

The stakes were high in fourth quarter as West chipped away at Mercer’s lead and found a way to tie the game.

With five seconds left to go, the Colts inbounded the ball at half court.

DeAjuan Stepp had as clean of a look for a shot that he had all game but couldn’t connect with the net.

Kelley was disappointed with how his team started the game.

“I thought Mercer came out ready to play,” he said. “They really hurt us on their offensive rebounding. We got in that hole, make a run to get back in it, a turnover or whatever dug us a deeper hole. A four-point game is suddenly turned to eight, we would pull it to two or three and it’s back to eight or 10 points. We were very impatient in offensive stretches tonight. I thought our defense was pretty solid after the first quarter. I am definitely disappointed because we have been playing really good basketball. I thought we took a few steps backwards tonight.”

Kelley’s said he benched the starters in the first quarter to give a chance for someone else to make big plays.

“We were getting outworked,” he said. “As the lead got larger and larger for them, our impatience on offense grew. It was just one of those situations where we needed other other guys an opportunity to play. Those guys came in and knocked down shots and did a good job for us. They gave us four minutes of good effort and gave me a chance to get ahold of those on the bench and refocus them. It was a boost for us to get us back in the game at the point.

The three-point loss to Mercer made it two games in a row where the Colts lost in a one-possession game.

Kelley said it is because his team has yet to play a full 32 minutes.

“You never expect your team to play perfect,” he said. “The games are too fast-paced. Guys are going to make mistakes. We are still at a point where we are only play half or a little more of a game in terms of effort and execution. We have a month left and that half a game needs to turn into three-fourths of a game and by tournament it has to be all 32 minutes where our effort and execution are at the highest level.”

West has had nearly week to rest up for Madison Southern as they host the Eagles Friday.

Kelley said every practice will be prepared to face them.

“We are going to first have a couple days off,” he said. “It will give us a chance to get rid of bumps and bruises and heal up a bit. Our practices will be about Madison Southern until the last part of Thursday. We will talk about situational stuff where we haven’t handled very well. Hopefully we will become a better team because of it.

Dalton Bruner led the Colts in scoring with 17 points and added seven rebounds.

Tipoff against Madison Southern will 7:30 p.m.