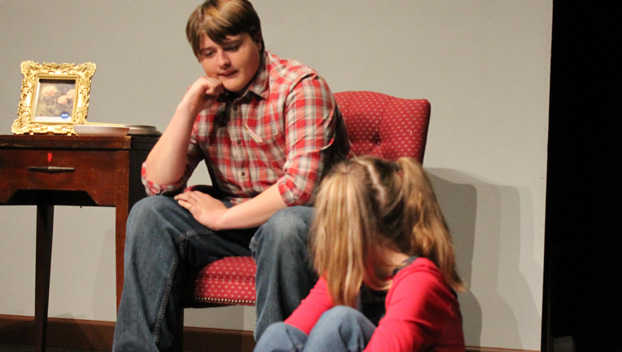 Tickets can be purchased at the event for $5 for students and $8 for adults.

“‘Ramona Quimby’ was picked for our student-led show simply because I saw it and immediately knew it was the one,” Gannon said. “I am fairly familiar with the books by Beverly Cleary and have always loved the movie adaptation. It almost felt like a sign.”

That sign came to Gannon after a month and a half of searching and picking out a different show for students to perform.

After bringing the show to the attention of assistant director Jonathan Adkins, Gannon said they were able to move forward with the perfect choice.

“He agreed enthusiastically. Now, here we are,” Gannon said.

Gannon said the pair discussed who would be the best fit for the characters after two days of auditions.

“Ella came to East High her seventh-grade year to be ‘Overture Girl’ in our production of Cinderella and has also been in three other shows elsewhere,” Gannon said. “As for our Kennedy, she has never been in a show before. I’m so excited and honored that my show is her first theatre experience.”

This year’s production is the first year EJHS has taken their show on the road.

In the past, Gannon said the elementary and middle schools would come to EJHS to watch the performance. This year, the high school brought the show to them.

“Because we took it to the schools, our set consisted of folding tables and chairs, plus any props that are travel-size,” Gannon said. “It was a challenge, but it was a lot of fun and a super cool learning experience.”

That experience, Gannon said, gave the production the opportunity to have a larger audience than it had in previous years.

“We could spread our joy and message to even more bright, young minds,” Gannon said.

“Ramona Quimby” is a realistic story, rather than the typical fairytale, Gannon suggests.

“Expect laughter, love and a show to remember,” she said. “The story is super modern and relatable and sends out a great message to kids and families everywhere.”

Renovations at WJHS, EJHS and JCTC to begin in spring For those who missed Tuesday night’s preview, Jessamine County Schools... read more