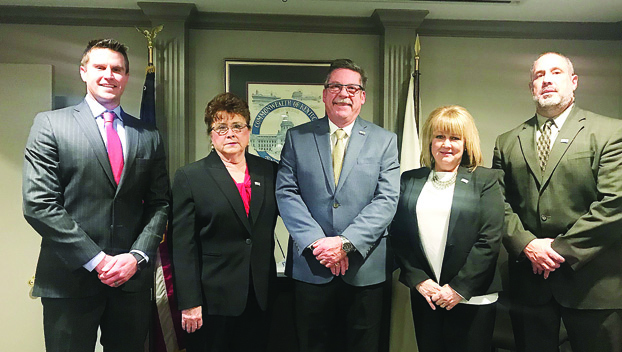 The Nicholasville City Commission sat down during its first work session earlier this month to discuss initiatives, fiscal priorities and ways to increase revenue in the year ahead.

Several factors were discussed, with all city commissioners agreeing three priorities stood out: fair compensation for employees and providing adequate and effective space for the Nicholasville Police Department and City Hall.

Revenue sources discussed with the greatest potential to increase the general fund include business license fees, insurance premium fees, electric franchise fees and real property tax. Opportunities to increase revenue in the utility fund include electric, water and sewer rates and fees to businesses and other utilities.

The city reports most of the rates discussed with the potential of an increase have remain stable for the past 10 years.

However, several factors make accomplishing the initiatives a challenge for the city of Nicholasville.

These challenges include a state-mandated pension program requiring Nicholasville to pay $1.3 million more per year into the pension program, strains on all departments because of well-trained employees seeking jobs in surrounding communities because of inadequate salaries provided by the city, inadequate office space and facilities which have proceeded to worsen over the last 11 years since the Great Recession and a growing population within the city creating pressure on systems and services offered to its residents.

“If we stayed the course we are on and did not do a single thing can we pay the pension?” Nicholasville Mayor Peter Sutherland asked in a recent meeting.

“Mayor, the funds we have created over the last 18 months are going to take care of the pension,” Commissioner Doug Blackford said. “We are good, but we are not good if we are going to go forward with some of these projects.”

The top priority discussed for Nicholasville’s general fund was to establish competitive and fair wages for its employees, an issue which has continued to get worse as the city reports it spends thousands of dollars in recruitment and training expenses annually to lose professionals to neighboring counties which offer higher pay after they gain a few years’ experience.

“In the study they did (we) are fourth as far as departments being behind,” Blackford said. “Our firemen, our water department our police department… all of them are extremely behind.”

Estimated salary increases from the general fund will cost the city $1.098 million.

“We recently did a study and committed a couple years ago to revisit it,” Blackford said. “I think with the changes in other communities it has driven us to put this back up quicker. We have issues across the board. If you really want to break it down, we really have only one department that is where it needs to be.”

Plans for a new city hall came to a halt in 2008 after declines in revenue resulted in building funds being cut across the board.

At that time, the police department was scheduled to move into the existing city hall.

In the utility fund, priorities include a $4 million 24-inch water main improvement project and a $14 million sewer plant expansion.

The pension increase and cost of living increases scheduled for employees are also deducted from the utility fund annually.

“We have to decide as a group what are we going to do,” Blackford said.

At the end of the workshop, city commissioners agreed to conduct necessary research and bring back data to share and discuss at a future meeting in order to move forward efficiently.