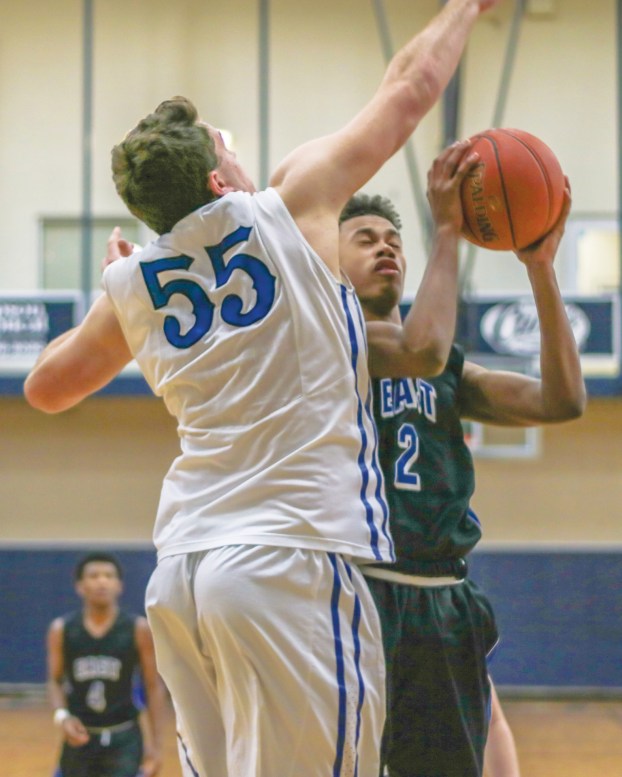 Zion Thomas attempts a lay up and is met by a defender at the rim. (Photo by Clinton Riddle)

The Jaguars (7-11) shot 33 percent from the field (5-13 from the three-point arc), many from outside the paint, as the Knights (9-11) had a distinct size advantage and used it to great effect under the basket.

Thomas’ points all came on free throws, as he was perfect from the foul line. He also led the team with eight rebounds, followed by Wadkins with five and Tyler Pitney with four boards.

Ben Johnson accounted for nearly half of the Knights ‘scoring, tallying 31 points on 12-16 shooting, tacking on five three-pointers.

The Knights out-shot East by a wide margin (25-50 team shooting, 7-16 on three-pointers), and finished with 27 boards, eight of which went to Brice Scott, with nine other players pulling down at least one each.

The Knights had a distinct size advantage under the boards, but East held their own defensively despite being muscled off the baseline for much of the night.

At 5:48 remaining in the third period, East’s Pitney took a hit to the forehead on a rebound attempt and was on the ground for several minutes, conscious but stunned. He ultimately walked off the court with some assistance and didn’t return to the game.

Coach Nick Barton said the team was prepared for the Knights,

“We prepped for them. We knew what they were going to do; they’ll run 2-2-1, back to zone, every time. Their height just got us, tonight,” he began. “Once Tyler went down, we just had a hard time inside. We got some charges early on against (Brice) Scott, which is what we planned. But they’ve got three or four big kids coming off the bench, as well.”

“(Lexington Catholic) hit their open shots. We didn’t hit ours. I feel like we got some good looks, early on, but they just didn’t fall down for us.”

“I thought we played well, man-to-man, we did a good job of holding them down and getting some turnovers. But we just couldn’t match up, size-wise.”

“We turn over the ball, a little too much. We struggled a lot with that, earlier this year. We were better tonight, we were more patient. We also just got our point guard back, the last couple of games. He’s still getting acclimated, getting into the flow.”

“So it wasn’t the greatest performance, but I feel like we got better tonight,” he concluded, “because our main goal is February and trying to win a district championship.”

Coach Barton also gave an update on Pitney’s injury, saying he was being monitored for signs of concussion, as a precaution, but he appeared to be doing well.

“I don’t think it was anything dirty,” he added. “It was just one of those things that happens.”