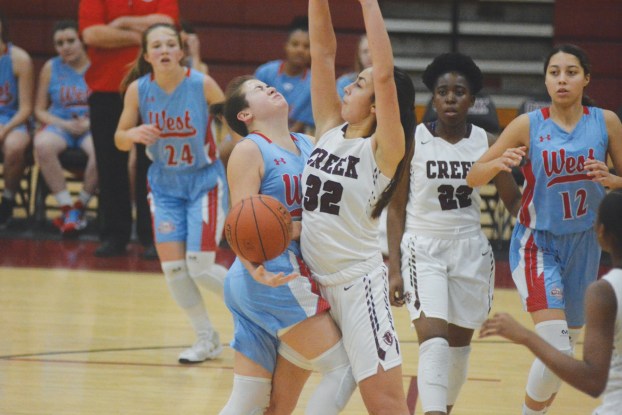 Haylee Rutherford gets fouled on her drive to the basket. (Photo by Micah Satterly)

The West Jessamine Colts traveled to Lexington to face the Lady Commodores Monday and left with a 55-41 loss.

The Colts controlled the tempo of the first quarter as they jumped out to an 8-2 lead and finished the quarter leading 10-5.

The Commodores flipped a switch as they drained two three-pointers in a row three minutes into the second quarter after both teams were unable to knock down shots.

West called a timeout in attempts to get the pace back on track.

Creek managed to climb back to take the lead 23-18 headed into the locker room at halftime after hitting four threes in the quarter.

The Colts’ nightmare of the game were turnovers as West turned the ball over more than 40 times.

Creek took advantage and extended their lead 40-27 at the end of third.

West managed to cut the lead to seven points in the fourth, but could not prevail.

The Colts dug themselves too big of a hole to climb out.

Head coach Chris Begley was not pleased with the loss.

“We beat ourselves,” he said. “We had unforced turnovers and errors.”

Begley said Creek was able to turn the game around early because of their perseverance.

“They were bigger, stronger and quicker,” he said. “I thought it was more of us than them, though. What killed us was we had over 40 turnovers.”

Begley said his team could not overcome the deficit late in the game because of the unforced errors.

“We had a chance late in the game,” he said. “We could’ve taken advantage of our comeback but we had an unforced turnover and they went down and hit a three on us. Ball game.”

The Colts have more than a week before their next game as they prepare for a home game against 6-11 Bryan Station.

Begley said during the time leading up to the game, he is going to get back to practicing the basics with his team.

“We are going back to our fundamentals,” he said. “Passing, too. Fundamentals and passing. We have to make these young kids grow up and it’s tough.”

Madlynn McDonald led the team in scoring with 19 points.

Haylee Rutherford and Alleyse Steinkuhl pitched in five points each.