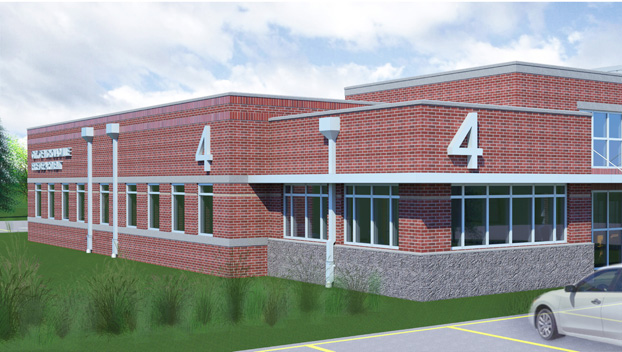 ‘What we need to fit our needs’

Nearing the final stages of design, the Nicholasville City Commission recently heard a presentation outlining the details of the new fire station set to be built in Brannon Crossing and go to bid early next year.

The new station will be 7,200-square-feet and is estimated to cost the city $2.8 million.

“We are nearing the final stage of design and we just want to share that with you before we send it in for regulatory review,” said Bob Amato, finance director for the City of Nicholasville.

With a pre-bid amount of $2.3 million, the projected total cost of the new facility is estimated at $2.8 million, which includes the purchase of the land in Brannon Crossing from earlier this year, Amato said.

Building the facility on East Brannon Road across from the tennis club, the facility will have two primary entrances, one for staff and one for visitors. Aaron Nickerson of GRW Engineers said the layout provides greenspace along the roadway which also allows for emphasis on the front of the building.

“We are trying to position the building, so it is at grade with vehicle trafficking going by,” Nickerson said. “(We want it to) fit in with the surroundings. If budget allows, (we will put in) an electronic sign along the road to put out displays for safety month and special events going on with Nicholasville Fire Department.”

A rain garden entrance will also be built next to the visitor’s entrance. This will allow for storm water to be cleaned off before it is released, Nickerson said. Also, the design allows the wash station for engines to shed its water into the vegetation area which will filter the water before it goes into the storm basin.

“(This is) another feature that is important, as part of this project is planning and teaching for the community,” Nickerson said.

Sleeping quarters for the staff will stay away from vehicles and the entrance of the facility for NFD staff to have a place to get away and find a place to rest. The building will also house a primary groups company area, and day-to-day use for staff areas which include sleeping quarters, an exercise room, a day room and break room with kitchenette – as well as showers and an area to put on gear. There will also be an area for office staff, a flexible space room, and one permanent office and watch desk with a lobby for visitors coming in. Two dedicated work stations for captains and a training room will also be provided.

“Basically,” Nickerson said, “what we tried to do since last time is break them up into three separate sections, so they can all operate and exist without entering one another but supporting one another.”

The new station will also house a pull through garage big enough to fit four fire trucks. There will also be a room for engine maintenance, cleaning and extractor areas with three wash basins, and an area with a washer and dryer for uniforms and cleaning.

“I had a couple questions,” Commissioner Patty Teater said. “First of all, I had sent the chief an email about possibly putting walls in the sleeping quarters. We have female fire fighters and I think that might be uncomfortable for them to have to sleep in the same dorm rooms as the men. If we are trying to build a state-of-the-art facility, I think that is something that we would like to get changed.”

Nickerson advised the design process had considered ways in which to find the most economical solution to build this facility while also addressing real world issues. Smaller sleeping quarters were addressed at first, along with two people occupying the same room, but in the end, Nickerson suggested the plans did provide a single flex room that can be used for whatever reason the department sees fit.

“When I worked at Danville,” NFD Chief Mark Case said, “Males and females shared the bunk room like we do now. When they built the new (facility) they did individual rooms, so they can have some privacy — but it has never really been an issue. Everyone is aware of male and female and they give each other privacy.”

Nickerson told Teater the new design was a way to come to a compromise without expanding the scope too far. Separate restroom facilities will be offered as well. One, Nickerson said, will be single occupancy and lock. The other will be multiple occupancy and be designed as a push pull.

“We have come up with what we need here to fit our needs,” Case said.

Inspired by a ‘Simple Town’