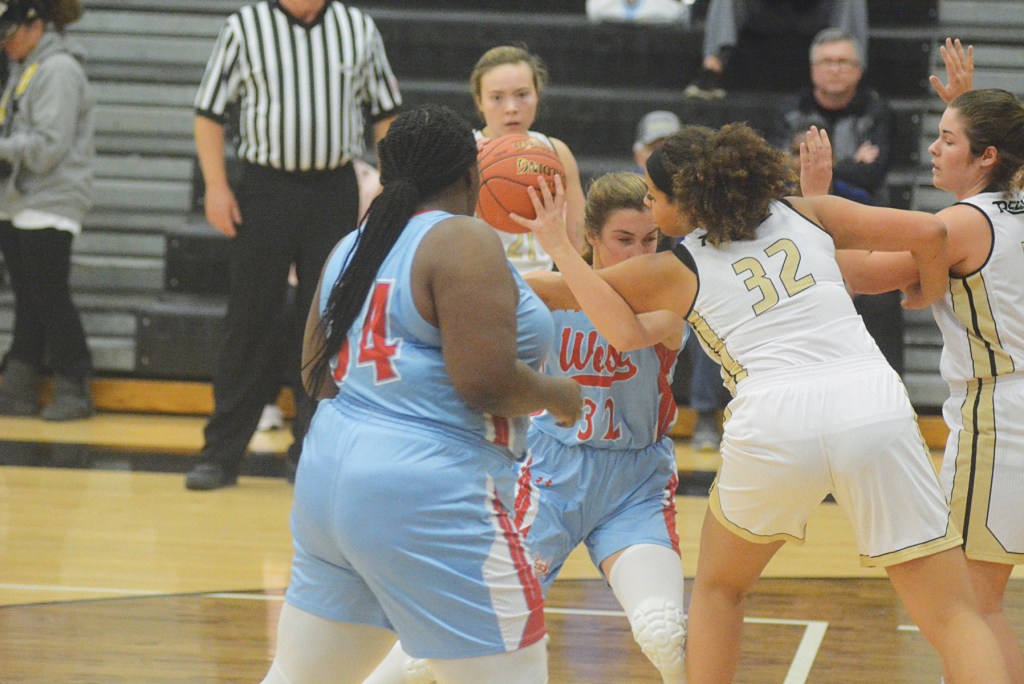 Alleyse Steinkuhl gets fouled as she drives through the lane in West Jessamine’s 72-38 loss to Boyle County last Thursday. (Micah Satterly photo)

The Colts were pummeled 72-38 by Boyle and have now lost the last six games to have a 2-9 record.

West took their only lead of the game in the first quarter after hitting a three-pointer to score the first points of the game.

The Rebels then went on a 13-0 run and allowed West to score only five more points in the first as Boyle led 18-8.

Boyle controlled the rest of the tempo from there, holding West to six points in the second quarter as the Rebels led 35-14 at the half.

Boyle stretched out the lead even further in the third quarter outscoring the Colts 22-10, including a Boyle and-one three-pointer at the buzzer.

The Rebels coasted in the fourth to come out on top 72-38 and have now won their last two games to add to their 3-4 record.

Head coach Chris Begley was highly disappointed in the outcome of the game.

“We had a poor performance,” he said. “We were prepared, but we did not execute. We were looking for excuses instead of ways to fix things. We have a bad habit of when we go down, we just let things continue to go bad for us. We are not mentally tough and we struggle.

Begley is aware of how young his team is, but is still holding each player accountable and knows they can put forth a better effort.

“We are young,” he said. “I have been saying that all along, but that is an excuse. If we do what we do in practice and listen to scouts then we would be much better. We are just not tough regardless of their age.”

Although basketball season is not even halfway over, Begley admits how much of a struggle the season has been for him as well as his 2-9 Colts.

Begley said in order to turn the season around, his team will have to find a way to overcome adversity.

“We are just going to have to get a little tougher,” he said. “It is all about experience. I am playing freshmen and sophomores out there.”

West is looking to snap its six-game losing streak.