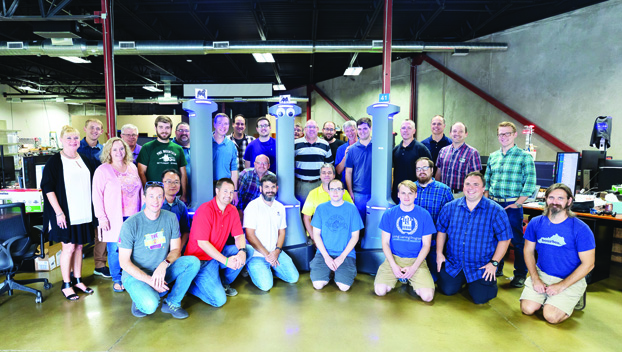 Badger Technologies, headquartered in Nicholasville, has added dozens of new high-tech jobs to Jessamine County over the past two years.

CEO Tim Rowland began the company in his own basement with 12 others and now employs around 55 individuals.

Rowland said he works with a diverse set of people and has plans to grow his business in the future.

“We have a great array of ages and experience levels as well as a diversity of full-time, part-time, semi-retired and college interns, etc.,” Rowland said. “If we are flexible, we can maximize the talent pool in the area. I rather enjoy attending conferences and tradeshows and watch the expressions on people’s faces as I describe the work our team does — and then tell them we are based in Nicholasville, Kentucky. They expect Boston, or Pittsburgh or Seattle. It has been a bit of a secret the high-tech talent that has grown up in Central Kentucky thanks to IBM, Big Ass Solutions, Lexmark, Toyota, Hitachi and many others. We have attracted great talent and they love Central Kentucky and want to stay.”

“Our driving vision is providing visibility and control to retailers as they manage the operations of their store locations,” Rowland said. “We feel there is a gap between the corporate dream and actual store execution. We have developed a way to use robots loaded with cameras and other sensors to roam their stores and provide remote awareness, a means to look into every store and see what is really happening, every day, every hour.”

Rowland said his team has developed a robot that will traverse aisles in retail stores checking for tripping hazards as well as empty shelves and mislabeled items. The robot has entered service in several stores in the Northeast. Rowland said a power outlet is the only thing stores need to provide for the robot which will automatically charge itself.

The robot, Rowland said, is six-feet four-inches tall, weighs 130 pounds, can operate on its internal battery for more than 12 hours and travels no faster than two miles per hour.

Every part of the robot is designed in-house, including the mechanical parts and software.

Rowland said he likes to make sure to address the concern the robot will take jobs away from retail employees.

“We certainly acknowledge the perceived concern, but this world of retail is so understaffed, robots may be one of the few answers to augment staff,” Rowland said. “Overwhelmingly, we have received very positive reception. The payload is a set of imaging cameras. One set of cameras focuses on the floors to determine if there are any spills or trip hazards. If one of these is detected, the robot will stop, send an announcement over the overhead speakers in the store, flash its lights and wait for someone to clean up the issue. The other set of cameras focus on the shelves themselves and identify products that are out of stock, displayed incorrectly or price tags that may be incorrect.”

Rowland said for some locations, having a robot in a local store has adapted to a normal thing. Every robot, he said, is monitored from the Badger Technologies control station and can be controlled remotely if necessary.

“As I step back and observe what it means to introduce sophisticated technology into the heart of our communities, it has been incredible to watch the reactions,” Rowland said. “Our first customer added google eyes and a name badge, dubbing it Marty. Kids adore the robot. At first, customers in the stores are fascinated, taking selfies, talking to it and testing to see if it will stop. Then after a few days, they pass by with a casual ‘hey, Marty.’ Then it’s just the normal thing to have a robot in your grocery store.”