‘The real reason for the season’ 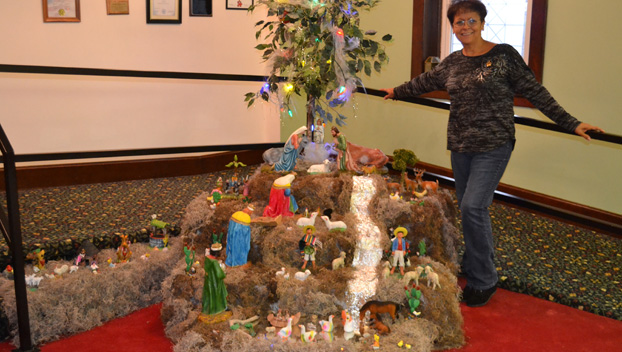 Regina Milano has been collecting nativity scenes for over 42-years and has grown her collection to more than 200 displays from all over the world.

Here collection includes pieces from Africa, Argentina, El Salvador, Peru, Hawaii, Native America, Ecuador, Spain and an oriental piece she has on display to share with the public at the United Methodist Church in Nicholasville, located at 303 W. Maple St. The church will be open this Saturday as part of the St. Nich Festival for residents to view the nativity displays from 1:30 to 5 p.m., with special presentations scheduled at 1:30 and 2:30 p.m. where Milano will share her story of growing up in Mexico and what traditions she celebrated during the Christmas holiday growing up.

“When I became a Christian, it became very important for me to keep the main story (of Christmas),” Milano said.  “I saw how Satna Clause has bulldozed his way into our celebration and I did not like it because it took so much attention away from my savior. I had a little one at first (nativity scene), and when I went to Mexico for a visit (and saw the big display) I thought, ‘I want one.’ All the pieces I had as a child they had and I purchased them all in one trip.”

The nativity Milano talks of is a hillside view. She explains where she came from in Mexico everybody who could afford one had one.

“We were very poor, and we had a dirt floor,” Milano said. “My family and my father and seven kids would go out into the hills and we would bring down dirt and bring a mountain into our house and all of this would be made out of dirt. We would go out and get live cactus and put it right into that little hill that we made, and we would water it and make it fresh.”

The tree at the top of the nativity is also very different than the Christmas trees seen in the United States. Normally using just a branch they had collected, Milano’s family would use a type of product normally utilized in tortilla making to grind down for a white paint to paint the tree.

“We would use tinsel to decorate it and use angel hair. We were fortunate enough to have one string of lights that look very much like this,” Milano said.

Growing up in Mexico until the age of 11, Milano said her traditions varied from the way we celebrate the Christmas holiday in the United States. Only starting to celebrate Christmas on Dec. 16, every night children reenact the pilgrimage of Mary and Joseph traveling to Bethlehem, Milano said. Over the course of nine days, they knock on a different door in town singing Christmas carols and telling each home owner they come as Mary and Joseph and they are looking for a place to stay.

“The people who are gathered in the home would look out the door or window a little bit and say, ‘there is no room in the inn, go away,’” Milano said. “We would do that for two-to-three different homes wherever people have agreed to participate, and we will do that for nine days. The significance of the nine days some people say is because Jesus was in the womb for nine months. Other people say that it signifies the journey and that it was a long journey.”

On Christmas eve, Milano said those participating would do something a little different than the previous nights. After the last carol was sung and the children had asked if there was any room to stay, the homeowners would tell the children there is no room in the house, but there is a barn out back. Inviting the children in, they would all gather around and sing carols and the Catholic rosary. Getting out a special Christmas candy, they would wrap the baby Jesus in a blanket and invite everyone to come forward as they would sing, “Come all you sinners, come on your knees, come and worship the Christ child that came from the heavenlies.”

“Some families would entertain with tamales and have a piñata to break,” Milano said. “At the end, the would hand out a brown paper bag full of peanuts and an orange and little Christmas candy. We did believe in Santa to a certain degree, but parents did not push it as much because they knew they did not have the money.”

In Mexico, Milano also said the tradition of opening gifts would wait until Jan. 6 for Three Kings Day.

An additional celebration called “The Lifting up of Jesus” took place on Feb. 2 where children would sing different carols and were once again welcomed back into the homes of residents and the Christ figure would transform and be given a different outfit complete with a robe, cape, gold sandals, scepter and crown.

“First time He comes he comes as a baby, the second time He comes as the King of Kings and Lord of Lords,” Milano said. “Once I started showing this to people, people knew I liked nativities and they started giving them to me. I wanted to point to the real reason for the season, and that is Jesus.”