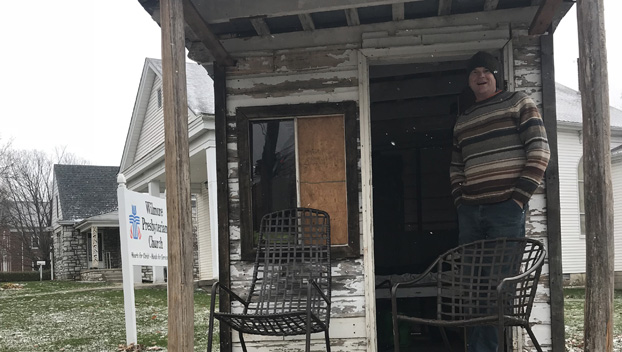 What would make you give up your heated and insulated house on a night with temperatures dropping to 25 degrees Fahrenheit?

For Andy Bathje, raising awareness and funds in partnership with the Blue Grass Community Foundation to meet the housing needs of Kentuckians is enough.

In Kentucky, one of every six Kentuckians are living below poverty level. During the 2018 K-Count, 3,688 individuals were counted as homeless.

Last week, Bathje and the AdventureServe crew spent six days living in a shack built of leftover construction materials and faced the cold reality of many living in the state of Kentucky.

Bathje decided three years ago to construct and live in a shack during the Blue Grass Community Foundation’s Good Giving Chal-lenge to raise awareness for the need in the Commonwealth.

AdventureServe Ministries has been providing free home repair services to low-income families for more than 30-years, however the need is still present. By living with less, Andy hopes to raise more for those in need.

This year, Bathje extended an invitation to “share the shack” to the local community leaders involved in service.

Through the three years Bathje has moved into the shack, he feels he’s grown in empathy and a greater understanding of the actual challenges many face.

He wrote, “I am convinced that we may not know what giving fully means, until we ourselves have needed the kindness of strangers.”

Through the Shack, Bathje has had the opportunity to speak to individuals about the challenges they have faced with homelessness and the impact service has made on lives.

Bathje and others from AdventureServe Ministries sat at the shack on the corner of Main Street and Lexington Avenue in Wilmore from Nov. 26th until their rice and bean dinner fundraiser during Old Fashioned Christmas.