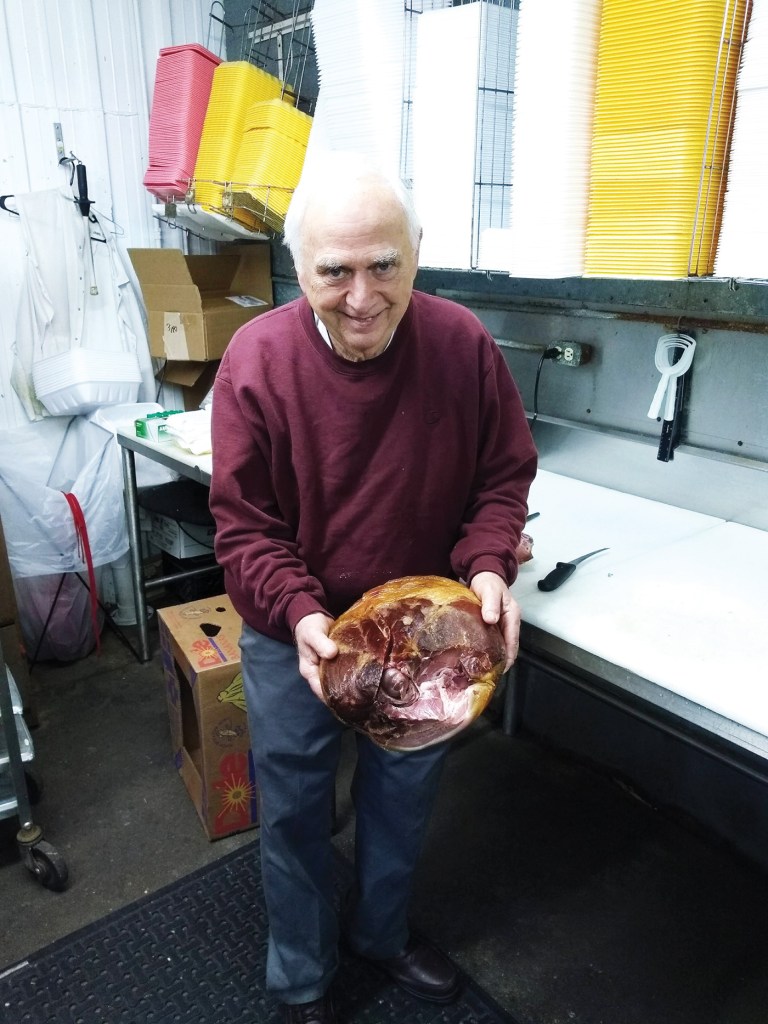 Fitch’s IGA in Wilmore is making 400 hams and 100 turkeys for the Thanksgiving and Christmas season.

Owner Leonard Fitch said he has been cooking hams for almost 30 years.

“This is the high point of our year,” Fitch said.

Fitch said he had a friend who owned a grocery store in Lexington and had tried to make hams the old-fashioned way by boiling the ham in a large container and then wrapping it in a blanket.

“I came up with a similar way by steaming them in hot water for about two hours and then using a cooking bag and a pound of sugar per ham,” Fitch said. “I cut slots in the ham, so the sugar will go into the ham. After that, I cook it overnight for about six to seven hours. Then we put a net over the ham so when it cools, it keeps its shape.”

Mayor Harold Rainwater of Wilmore has bought a ham for Christmas from Fitch for 30 years.

“You can hardly taste the difference in Honey Baked Ham and Leonard’s ham,” Rainwater said. “It’s that good. If you come in and want a ham for Thanksgiving, he’ll cook it for you. He’ll even slice it for you. It’s basically a Honey Baked Ham in Wilmore.”

Rainwater said he looks up to Fitch and tries to stay loyal by shopping only at IGA when possible.

“Here’s a store that doesn’t sell lottery tickets, tobacco, alcohol and he’s not open on Sunday,” Rainwater said. “I don’t know a store of this size in the world that can say that.”

When Rainwater first met Fitch, he said Fitch was the “coolest” man he had ever met.

“He had jet black hair and it was combed back on the sides, and he had a white Corvette convertible,” Rainwater said. “That was my first memory of him. I’ve served on the city council with him for almost 50 years. He’s always (served) Wilmore well and he’s never disappointed me.”

Jerry Massingill, whose mother worked with Fitch on how to cook the hams, is a regular customer for hams each year.

Fitch said the hams he makes are the same ones he puts on biscuits for Wilmore’s Old Fashioned Musical Christmas every year on the first weekend in December.

Fitch’s son Christopher has helped extensively making the hams and serving them.

To make his specialty, Fitch said he only uses country-cured hams.

“I think it’s a good product and I’m proud of it,” Fitch said. “I enjoy doing it. If they’re satisfied, I’m tickled to death.”

The road to nationals