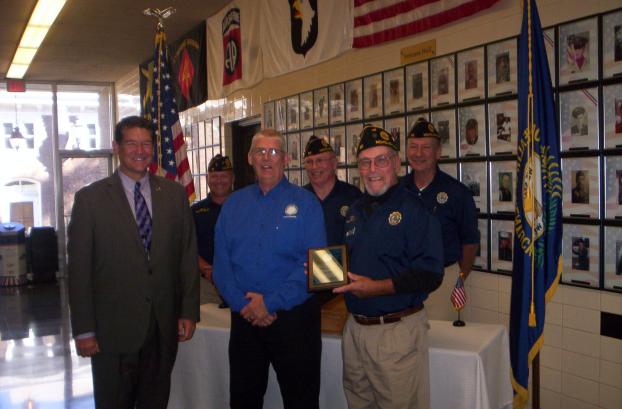 Butcher, an employee of Jessamine County Fiscal Court for seven years, has a deep respect for all veterans.  Several of his family members, including a son, served in the military.  His son served in the Army’s First Cavalry Division from 1999 to 2004.

Six years ago, with the support of then County Judge-Executive William Neal Cassity, Butcher initiated the project of collecting photographs of local men and women who are currently serving or have served on active duty to display them on a wall in the Jessamine County Court House.

After collecting photographs of veterans, Butcher takes them home to scan and frame at his own expense.  Currently, there are 149 photographs on display with the number increasing.

West recently said, “The award reflects the efforts of Roy Butcher to go above and beyond in his support of Jessamine County’s veterans. There are plans to designate the section of the court house where the military photographs are located as the Hall of Honor.”

Photographs can be dropped off at West’s office in the court house, located at 101 N. Main St.

The American Legion is known as the nation’s most influential, effective and dependable advocate of veteran affairs, Thornton said.  For more infomration about the American Legion and Ray E. Miller Post No. 63 visit Legionpost63ky.org.

From staff reports Nicholasville Mayor Pete Sutherland joined the list of mayors across the nation who are recognizing a growing... read more