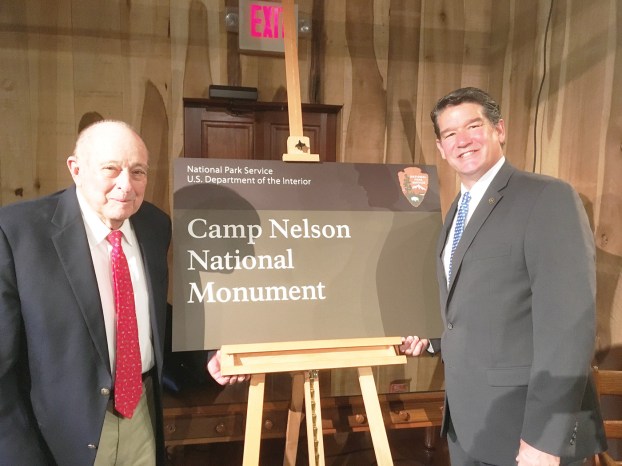 ‘A story the whole nation can appreciate’

Many gathered over the weekend at Camp Nelson, one of the largest Union Army recruitment and training centers in the nation for African-American soldiers during the Civil War, for the announcement of its designation as the first national monument in the state of Kentucky.

“This has been a project for our office for five years, this is not something new,” U.S. Rep. Andy Barr said. “This is something we have been working consistently on for a long period of time and, in fact, we initiated this process before this cycle.

“This has nothing to do with politics this has to do with the people here and it is about the story of Camp Nelson and making it a story the whole nation can appreciate.”

This is President Donald Trump’s first national monument designation and was reportedly made after receiving congressional and public input.

“Camp Nelson and all the patriots who have ties to it hold an incredible place in America’s history, and President Trump’s action to designate Camp Nelson as a national monument will ensure the ongoing protection of the site and the story,” U.S. Secretary of the Interior Ryan Zinke said. “America’s parks, battlefields and monuments tell the story of who we are as Americans. Camp Nelson was instrumental as a refuge for escaped and emancipated slaves. The camp tells the story about Americans who risked absolutely everything they had and everyone they loved to fight for their freedom, the cause of liberty and to preserve the Union.

“I thank the president for using the Antiquities Act as it was truly intended and I can think of no better place for his use of the act than to recognize African-Americans for the sacrifices they made for this country and for the contributions they made for all Americans’ freedom than by elevating Camp Nelson to national monument status. I look forward to future generations visiting this site and learning about our nation’s history.”

Over the course of three years, the national government will now work to create a budget and gradually add more funds towards its ownership of Camp Nelson, making the Jessamine County Fiscal Court budget for Camp Nelson smaller.

County employees will remain at Camp Nelson and be paid for by the fiscal court until the federal government takes complete ownership. Over time, national park service employees will also be added to the staff.

The Jessamine County Fiscal Court is hopeful Congress will include funds in their next budget for acquisition of the Glass Farm, which would then be purchased by the national government wiping out any debt the fiscal court may have left on the land.

“Here we are today having achieved that signature on Kentucky’s first national monument,” Barr said.

The first thing Camp Nelson achieving national park status does is it gets the arrowhead on the map, Barr said. Tourists, he said, who go to the Department of the Interior and the National Park Service website to look for historical places will now be able to find Camp Nelson as one of those very few places in the country that the National Park Service represents as historically-significant to not only the whole country — but the world, he said.

“It will attract a lot more tourism to Kentucky and it will elevate the story to a much broader audience,” Barr said. “For the community, it brings in federal resources and the resources of the national park system. We now have an interim superintendent of Camp Nelson National Monument and it will allow us to invest federal resources to tell the very special story about what happened here.”