Reeling in the big catch: EJHS graduates win Angler of the Year 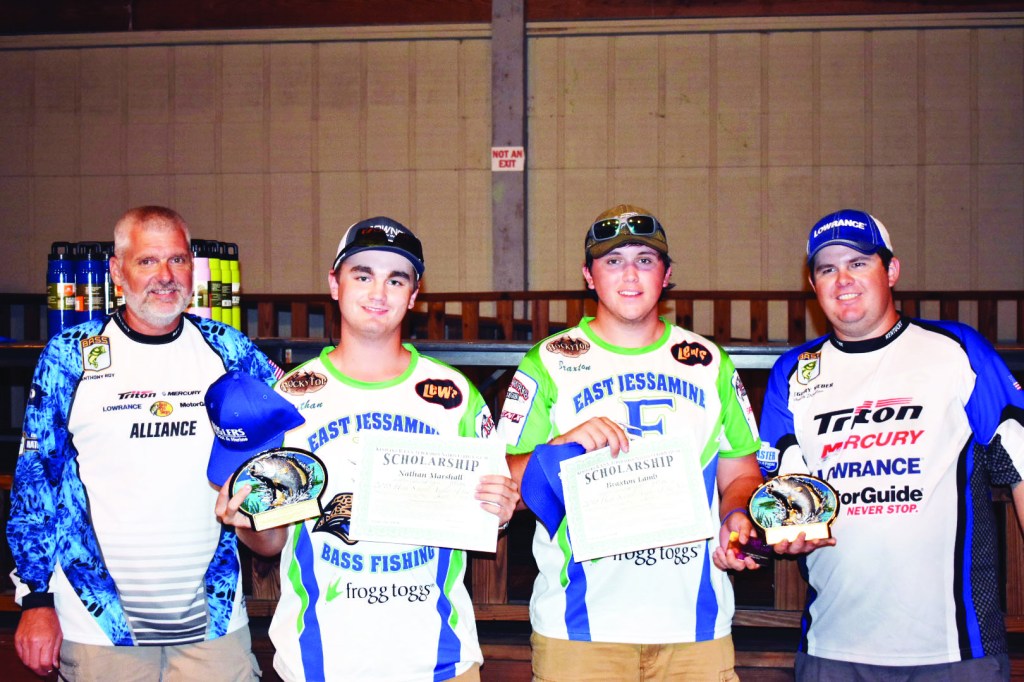 Photo submitted Nathan Marshall and Braxton Lamb, East Jessamine High School graduates, recently won Angler of the Year for the 2017-2018 Bass Team series earning them $500 a piece in scholarship money. Combined, the pair scored 1,142 points out of 1,200 and also received a mud hole rod kit and a $50 gift certificate from Anglers Outpost.

“It was definitely a really good year for us,” Nathan said. “We started off the year really well and won on Herrington Lake, which is considered our lake home. Then we moved onto Cumberland and we love Cumberland. We did really well there. Kentucky Lake was a little harder because it is in really bad shape right now.”

The pair won a trophy for first place and big fish at Herrington Lake in their first tournament of the series. They also won a trophy for big fish at their fourth tournament at Green River. Combined, the pair scored 1,142 points out of 1,200. In addition to their scholarship money, they each received a mud hole rod kit and a $50 gift certificate from Anglers Outpost.

“They had been chasing this for the last three years and as a team, they finally made it,” Mark Marshall, head coach for the East and West Jessamine Bass Team, said. “In preparation of tournaments, we will meet and bring in local anglers to talk with the team. We also will go and pre-fish the lake we are going to for the tournament either the Friday before or the previous weekend. It also helps that the students continue to fish and go back to the lakes every season where they get better every year.”

Mark said last year, he had five teams advance to nationals at Pickwick Lake in Alabama, including 18 students from East and West Jessamine high schools. The team usually competes year-round except for in December, January and February.

“This year, I have another team that has grown up in the program and I see no reason why Jessamine County cannot have back-to-back Anglers of the Year,” Mark said. “We also have some new kids who will be starting their journey to get to the top. This year, we have a goal of sending teams to the KHSAA State Tournament and both BASS Nationals and Student Angler Federation/FLW Nationals in June.”

Lamb said winning Angler of the Year meant a lot to him.

“It was really special as it was my senior year,” Braxton said. “It was a really good finish on how we did. We usually go down and practice two to three days before putting in all that hard work… It was a high amount of points every time we finished in the tournament. We would have to place higher than the people we were fishing against.”

Mark said the money has helped Nathan and Braxton with book funds and college tuition. Lamb is attending Bluegrass Community and Technical College, and Nathan is enrolled at the University of Kentucky.

Winning Angler of the Year, Mark said, also gives his other students something to work toward.

“I am very proud of this team,” Mark said. “It includes my son, so I have personally traveled with them over the past three years and have been there when they have barely missed going on to nationals and Angler of the Year.

“I have seen the dedication they have shown and (the) never give up attitude to eventually power them to the top as they did this year.”