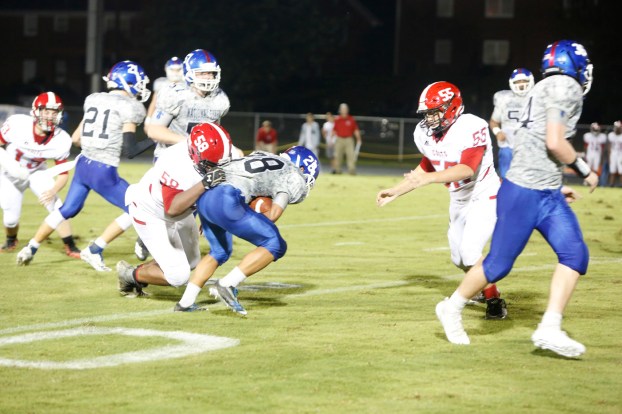 HARRODSBURG – For the second straight week, a Jessamine County team tried unsuccessfully to execute a second-half comeback against Mercer County.

This time it was West Jessamine, which was one score away from being on the wrong end of a running-clock game late in the first half before rallying to make it a one-score game midway through the fourth quarter.

That was as close as the Colts came, however, as they fell 36-22 at Alvis Johnson Field.

Desmond James ran for one touchdown and threw for another in the fourth quarter for West (4-4, 1-2 District 4A-5). Immediately following Mercer’s fourth turnover of the night, he connected with Emilio Hale on a 75-yard scoring play to pull the Colts within 29-22 with 6:08 to play.

The Colts got the ball back at their own 32-yard line with 4:23 remaining, but Kaelin Drakeford picked off Noah Reliford’s pass on fourth-and-13 and returned it for the clinching score for Mercer (4-4, 3-0).

After a 1-hour, 43-minute weather delay prior to kickoff, Mercer opened a 29-0 lead and appeared to have gotten the score that would trigger the mercy rule late in the first half when Drakeford broke free for a 54-yard touchdown run that was called back due to a holding penalty.

Kane Lathery got West on the board with a 5-yard TD run on the Colts’ first series of the second half, and James scored on an 8-yard run with 8:29 to play.

Greer Stone got 66 yards on his first rushing attempt and led West with 70 rushing yards on six carries, while Lathery had 56 yards on nine carries. Reliford was 5 for 15 for 33 yards but was intercepted three times.

West Jessamine Colts ran all over Marion County, earning a 27-7 win Friday night. The Colts are now 4-3, with... read more