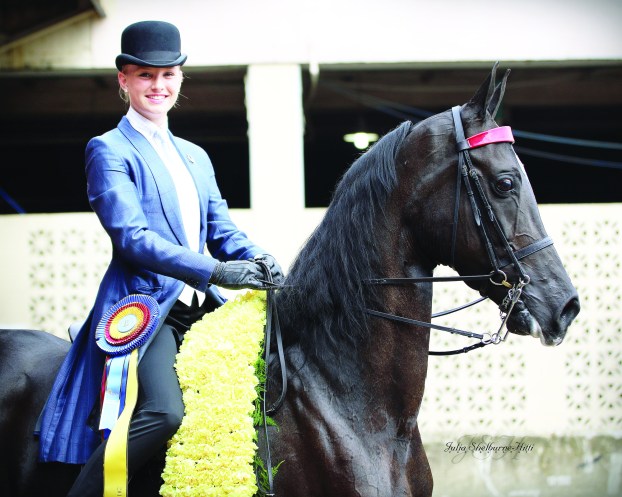 Hodge and Brookhill’s Knockout, an American Saddlebred, were victorious in the qualifier and championship classes which took place at Freedom Hall.

Hodge competed in the Junior Exhibitor 14 to 17 Three-Gaited Country Pleasure and said some of her opponents were close friends.

Although Hodge was the one riding Brookhill’s Knockout, she knew Brookhill was not the only thing that got her there.

“I was elated and very grateful for everyone who helped us get there,” Hodge said. “From my grandpa, family, trainers and instructors to the vets, grooms and blacksmiths.”

Bella’s grandfather, Larry Hodge, said he is thrilled to see his granddaughter win at such a high level.

“It’s a great honor and great accomplishment that has made me very proud to see a member of the family keep going with it,” Larry said. “It makes me very proud to be able to help and be a part of it.”

“If I’m at the barn on a Saturday, I’ll stay for the day and take several lessons,” she said. “I help get the lesson horses ready (tacking up, grooming, etc) and put them away when they are finished.

“From our first show in the spring until now, at every lesson and every show we are trying to improve and learn to be the best team we can be. The day of the show, I listen to my trainers and focus on my ride, doing the best I can.”

During show season, Bella rides her horse every other week at Kalarama Farm in Springfield. She also trains at DesMar Stables and Wingswept Farm on her off weeks.

Lillian Shively, one of Bella’s trainers at DesMar Stables, said Bella’s attitude is what sets her apart.

“She realizes anything you do, and you do well, you’re going to have to put your time in,” Shively said. “She has a tremendous determination. When she gets off a horse, she doesn’t just leave. She takes her saddle and bridle off. She cares about the horse.”

Bella began riding horses even before she could walk.

“I’ve been taking lessons for almost nine years and competing for four,” she said.” I’ve always loved being at the barn, whether I am helping, taking a lesson, or trail riding, Competing seemed like the next step.”

Bella is not a stranger to the Kentucky State Fair. This is her second year winning in her division at the World Championship Horse Show.

“I have competed at this level for four years,” Bella said. “This was a very big step. Last year, my horse and I won the 13 and under division (which was) a dream come true. It was amazing to be able to move up into the next age group and win again.”

Horses are an integral part of Bella’s life, and she said she has learned countless lessons from them over the years.

“Horses and riding have taught me so many life lessons — patience, hard work, respect, confidence, balance, to be humble and to listen,” Bella said. “It’s not always about winning and blue ribbons, it’s about learning and the experience.”

Although Bella said riding competitively requires several commitments like hard work and perseverance, she would not have had it any other way.

“Many hours of my life have been spent at the barn practicing and perfecting my skill,” Bella said. “Although it is difficult, it has made me who I am — and I wouldn’t change anything about it.”