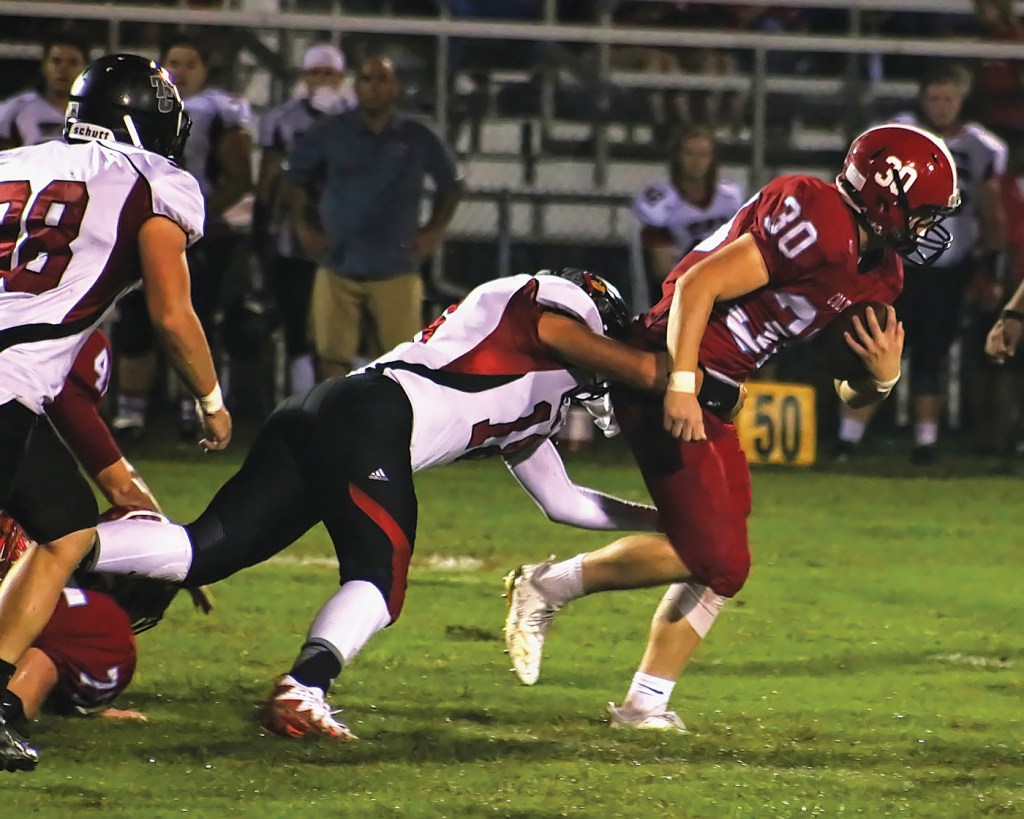 Taylor County paid a visit to West Jessamine on West’s Homecoming Night and proceeded to wreck the place.

In monsoon-like conditions, the Cardinals ran roughshod over the Colts throughout the game, finishing with a 46-0 win.

It looked like it was going to be a running game, early on, especially after the 50-minute lightning delay in the second quarter and several torrential downpours during and after the delay. Still, the Cardinals tallied 191 yards in the air in addition to their 289 yards on the ground.

Taylor County had little difficulty in opening gaps and blocking outside for their running backs, averaging 6.9 yards/carry (42 carries). In addition, the Colts couldn’t seem to hold the ball when they did have it; West turned over the ball four times, and at least once more when it appeared that the Colts’ running back had the ball stripped. West also threw three picks, including a late-game end-zone pick-off that was called back on a holding penalty.

Bryson Scott led the Colts with 34 yards rushing, accounting for 41.5% of West’s yardage on carries. Kane Lathery picked up 93 of the Colts’ 118 yards on passes from Noah Reliford, 78.8% of their total passing. Colton Jenkins had a big night on defense, with 13 total tackles (7 solo, 6 assists).

West (3-3) had yet to lose a game by more than 14 points; their first game of the season was a 14-0 home loss to Walton-Verona. Their highest point-margin in a win came against the Nelson County Cardinals on the road, a team that has yet to win a game this year (0-5). West now sits at 1-2-0 in the region, 0-1-0 in their district, with four games remaining. They take on Marion County in their last home game of the season on September 28th. The Knights (1-5) are coming off a 51-8 loss to Mercer County on the road, and have been outscored by opponents an incredible 230-42. Game time vs. the Knights is 7:30 pm at West.