EJMS announces students of the month 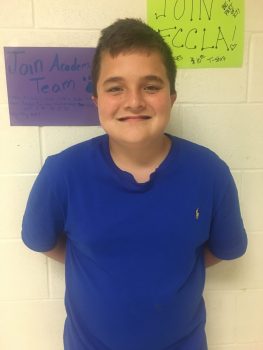 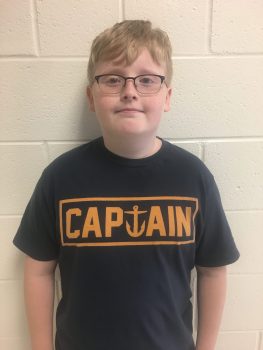 Eighth-grader Andy McBride, son of Heather and Patrick McBride, was recently announced as student of the month at East Jessamine Middle School. According to his teachers, Andy has started the eighth-grade year on a positive note. He leads by example by doing exceptional work, keeping organized, and stepping up to the tasks presented to him. He also does a great job in the school band. Andy is respectful to his classmates and teachers, and acts with integrity every day.

Seventh-grader Sam Perkins, son of Morgan Perkins and Joseph Cartwright, was recently announced as student of the month at East Jessamine Middle School. Sam was chosen by his teachers because he’s been on point with volunteering since the first day of school. He is helpful to his classmates and his teachers every day. Sam is playing on the EJMS Jaguars football team. It’s his first year, and he plays the position of guard. Sam wants to be a professional football or baseball player when he grows up. His backup plan is to work at a company as an engineer.

Sixth-grader Maximus (Cash) Jones, son of Mae and Matthew Jones, was recently announced as student of the month at East Jessamine Middle School. Cash’s teachers shared that he has been a wonderful classmate.  He is always kind to his peers.  He is helpful by always holding doors, putting down chairs in homeroom and various other acts of kindness.  He is an overall model student. Cash is fascinated by science and wants to be an astronaut, an astronomer or a biologist when he grows up.