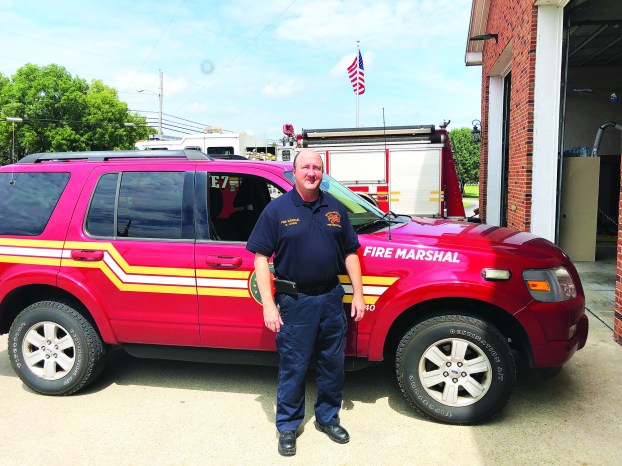 Dave Johns of the Nicholasville Fire Department was recently promoted from battalion chief to fire marshal, a new position in Jessamine County.

“The new fire marshal position is one that we are all excited about,” Nicholasville Mayor Peter Sutherland said. “He will be able to conduct life safety and fire inspections for businesses, hotels, factories and apartments within the city limits.

“This will improve safety for our citizens and people visiting from out of town as well. This will also help our ISO rating, which in turn should help decrease our insurance rates. We think this position will be one of partnership with our community.”

Starting out as a recruit with the Wilmore Fire Department 26 years ago, Johns said he has been a part of the Nicholasville Fire Department since 1995, and could not see himself doing anything else.

“I love it,” Johns said. “I couldn’t get out because I just love it and I had great guys to work with. Now I am working with myself.”

Part of the new fire marshal position will be to inspect buildings and write ordinances to improve fire codes within the city.

“My main focus right now is getting into all businesses, apartments and schools, mostly in Nicholasville, that need to be inspected that the majority have never been inspected because the state fire marshal has had their budget cut to pieces,” Johns said.

A position that has been talked about for almost a decade, Johns said many buildings in Jessamine County have not been inspected in almost 40 years.

Many of the owners, Johns said, have never even had anyone tell them what the fire code is.

“We have to keep the people safe in this city better than we have,” Johns said. “If you have read up on any of the big fires where someone has died and there has been a lot of fatalities, it is because someone did not do the code work that is required to prevent that.”

“We are excited about him being fire marshal,” Nicholasville Fire Chief Mark Case said. “This is a position we needed for years. Retired Chief Brumfield laid the groundwork for it, and it was up to us to follow through. With the support of commissioner Black and the other commissioners, we were lucky enough to get it done.

“It will greatly improve the safety of people working and living here in Jessamine County.”

Johns said the goal is to be ahead of the game by preventing fires. One area that can pose a challenge is when buildings change occupancy. Common things Johns will be looking for are good housekeeping, keeping exits clear and making sure required smoke detectors and alarms are working.

“It is really simple stuff,” Johns said. “The vast majority of places I have been working with so far it is not that big of a deal. It is great for Nicholasville and it is great for Jessamine County too.”

Nicholasville votes not to raise taxes

The Nicholasville City Commission voted not to increase tax rates for 2019 on motor vehicle, watercraft and real and personal... read more