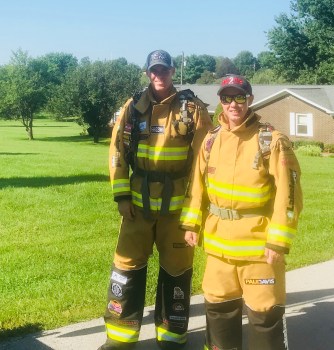 Local firefighters join together to bring recognition to PTSD, cancer and suicide

“It has become a big issue across the nation everywhere for PTSD and if we can do stuff to help bring awareness and help people who are battling with PTSD – then I am all about it,” Reynolds said. “Anything we can do to help each other. We are one big family. It doesn’t matter what department you are from, you are family. That means a lot to each and every one of us. We do what we can to help each other out.”

On Aug. 23, Moss and Reynolds met at the Scott County Fire Station, and in full gear walked 20 miles to Lexington Fire Station Nine. On Aug. 24, the pair walked from Station Nine in Lexington to the Lexington Fire Headquarters where a ceremony was held to remember first responders who have lost their lives or who may have battelled issues such as cancer, PTSD or suicide.

“PTSD and suicide is a real hot topic in the fire service right now as well as cancer,” Moss said. “We have actually lost more first responders due to suicide than line of duty deaths.”

Moss said the My Brother’s Burden Walk was organized as a way to bring recognition to cancer, PTSD and suicide for the federal and local government. The walk, he said, is another way to remember not only those who died on 911 but those the fire service loses every day.

“America has this stigma with mental health,” Moss said. “It is a dirty word wither you are in the military, a police officer or a firefighter. If you mention mental health people look at your different. I think that is a big issue with what we are seeing with these suicides is guys are scared and timid to ask for help.”

“In the fire service we have this saying that the kitchen table is where all problems are solved,” Moss said. “That is a real thing. If we come back from a call that is bad, we come in here and we sit down and talk about it. I think that is where the issue lies. A lot of guys do not want to talk about it and you bottle it up and eventually, it can lead to suicide, drug abuse or alcohol abuse. People start finding a negative outlet to take the bad images away.”

Walking to raise awareness for cancer is also important as younger firefighter in their 20’s have seen an increase in diagnosis, Moss said.

“We go into that environment now and it is like a hazardous material incident,” Nicholasville Firefighter Joshua Polley said. “It has to do with the introduction of the type of stuff that is burning… and the things they have built the homes with.”

In fact, Moss said a firefighter is two times more likely than a normal male to be diagnosed with testicular cancer.

“We are trying to bring awareness and have more people out there realizing that these PTSD things, these suicides and these cancers —  they are not a joke and they are killing firefighters quicker than fire’s are killing firefighters,” Moss said. “We train for fires, we train for wrecks and we train for medical calls. You can’t train for cancer. You can’t train for that next call that is going to leave a traumatic image in your head. Anything we can do to bring awareness (we want to do).”

Reynolds agrees stating, PTSD, cancer and suicide not only affects the firefighter – it affects their families as well.

“You get off a long shift and you still have stuff on your mind,” Reynolds said. “You go home to your family and they are happy to see you. It is hard to let stuff go.”