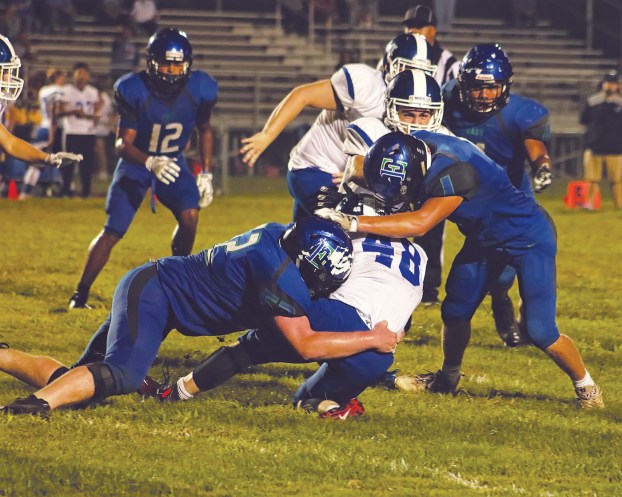 In the home opener of their 2018 football season, East Jessamine pulled off a last-second victory against visiting Montgomery County in dramatic fashion, holding on for a 27-26 victory.

Junior defensive back Dylan Moore slid in front of what could have been a game-winning field-goal for the Indians with four seconds remaining on the game clock. The Indians’ holder lost the ball as Isaiah Williams recovered the fumble for the Jags and sealed the victory.

East started off the scoring with a 33-yard pass to Jaylen Taylor in 1st quarter. The Indians answered with a six-yard TD run and scored again with only twenty-five seconds remaining in the first half on a nine-yard carry. East responded just after the start of the second half on Valdon Miles’ 21-yard carry in the third quarter.

Montgomery Co. responded to Taveon Dean’s two-yard run in the 4th quarter with a three-yard TD carry of their own just over two minutes later. After fumbling the snap on the extra-point attempt, the Jaguars went three-and-out on their next series.

The Indians were forced to punt on their next possession, and this is when the tide turned in favor of East Jessamine.

Just inside their own twenty-yard line, the Indians’ punt attempt was blocked by Jaguars junior LB Cameron Segar and rolled into the end zone when East recovered the ball. Moments later, a safety call meant the Jaguars would get the ball back with barely two minutes left to play.

Taylor scored his second receiving TD on a 36-yard catch with 1:10 left in the game, and Turner McHolan’s extra-point attempt was good.

After Montgomery County brought the ball all the way down to the Jags’ one-yard line, setting up for the field goal and the win with only 6.4 seconds remaining in the game. A bad snap cost the Indians’ kicker crucial seconds that allowed Moore to slide directly in the path of the ball, and Williams recovered.

Segar also ran for 120 yards on 26 carries. Dean picked up 53 yards and a touchdown on 12 carries, and Miles finished with 44 yards and a TD on the ground, as well. Taylor’s 121 yards on five receptions led the team by a huge margin. East QB Cameron Garrett went 7-11 with the aforementioned two TD and one interception.

“We were focused,” said Coach Bowlin on his team’s attitude coming out of the season-opening 24-12 loss to Lloyd Memorial. “You cannot tell these kids what it’s like until they’re actually out there. You can’t recreate that in practice. And until they get in there and get that fire and find out what that’s like, they don’t know how to react.”

Coach Bowlin went on to praise his leading scorer of the game. “I’m just so proud of (Jaylen) Taylor, what he did tonight. He said, himself, that  he didn’t have a good game, last week. We just kept in there with him, kept encouraging him, have a great attitude, and keep coming.”

As for the way the game ended, the Jaguars’ coach was visibly emotional.

“It was just a storybook ending. Three minutes, I’m running out of time-outs,” he said. “I told them if they could just get to fourth down, we’re going to go after the block. And then the ball went out of the end zone, and I thought ‘we can win it now.’’”

“We had a very dysfunctional kicking game, last week, but we really brought it all together tonight,” he continued, his voice cracking. “And we dedicated this game to Aubrey Howard. (Kicker) Turner McHolan was a good friend of hers. I just felt like that was Aubrey, guiding that last kick through the uprights.”

Howard passed away and three of her friends were seriously injured in a tragic car accident in March when the vehicle in which they were riding hit a tree on the opposite side of the road. She was only fifteen years old.

The Jaguars take on Clay County on the road this Friday in the Appalachian Bowl. The Tigers (0-2) lost to Bourbon County in their season opener on August 17th, 26-13, and followed with a loss at West Jessamine on the 24th, 22-18.