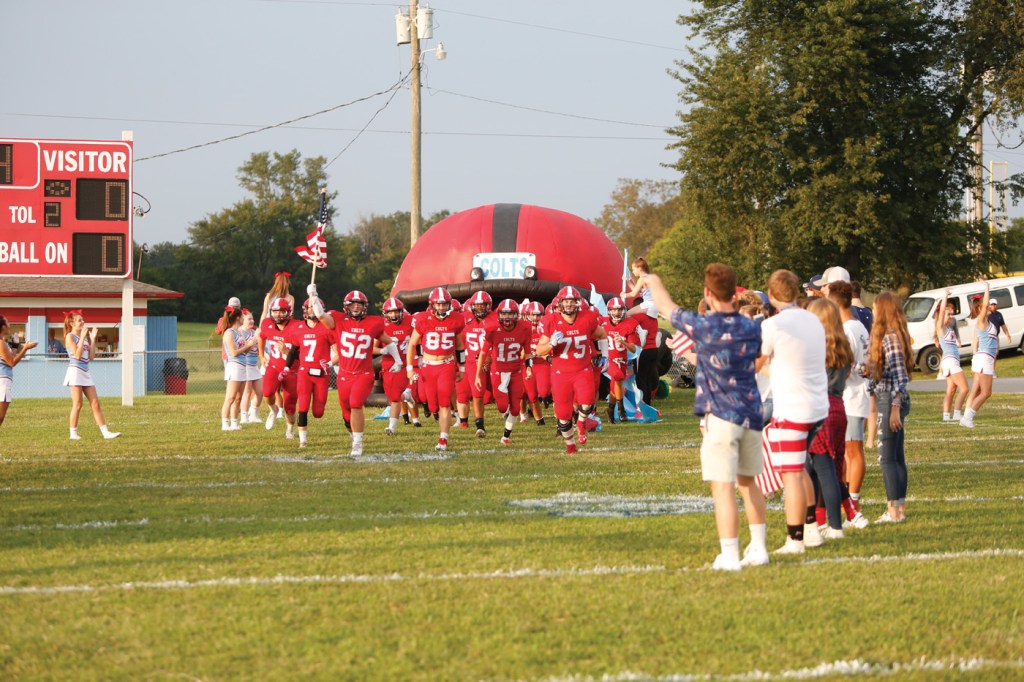 West Jessamine got its first win Friday night – along with a firsthand look at the value of hard work.

Coach John Gilliam said the Colts are going to have to work for everything they get this season, and they had to fight until the final seconds Friday night to defeat Clay County 22-18.

“We’re going to be one of those teams that can’t afford to take a day off. We just can’t afford that this year,” Gilliam said. “We’ve got to come to work every day, and they did that this week and it paid off for us.”

Greer Stone scored all three touchdowns for host West (1-1), which had been shut out in its season opener. But the Colts’ win wasn’t secured until Kane Lathery intercepted a pass at the 13-yard line with 15 seconds remaining.

It was the epitome of a hard-fought win, and it came only after a hard week on the practice field.

“We came to work this week,” Gilliam said. “We ran a heck of a lot more, and the kids mentioned in the (postgame) how that helped them, how we were able to push through.”

Stone said the Colts conditioning wasn’t what it should have been in their season-opening loss to Walton-Verona, but that changed last week.

“This week we absolutely busted our tails. We’ve been getting in such good shape, and that definitely paid off, I think,” he said. “Last year we only beat (Clay) by one point, so we knew they were ticked off and … we knew that we had to come back harder and stronger than last year.”

West defeated Clay 14-13 last year in a game that was in doubt until the Colts stopped Tigers quarterback John Gilbert on the game’s final play. This game once again came down to the final Clay drive, which was made more difficult by a critical special teams play.

After West was stopped at its own 45-yard line with 3:07 to play, Stone launched a long punt that teammate Chris Collins downed at the 1-yard line, leaving the Tigers 99 yards from where they needed to be.

“To be honest, that was the best punt of my life. Not even in practice have I ever done that,” Stone said.

Collins got to the ball just in time, batting it down on his way into the end zone.

“That was textbook, it was awesome. That was one of the best parts of the night,” Stone said.

Stone scored on a 1-yard run in the second quarter and a 24-yard reception in the third, and his 33-yard touchdown run with 8:26 to play gave the Colts a 22-12 lead with 8:26 to play. It also gave the senior half as many touchdowns as he had all last season.

“It’s a pretty good night,” said Stone, who also had an interception and a two-point conversion pass in the third quarter.

Clay scored just over two minutes later to pull within four points, but West was able to run more than three minutes off the clock before the Tigers got the ball back with 2:56 left.

Stone rushed for 99 yards and Lathery rushed for 45 for West. Noah Reliford completed seven of eight passes for 75 yards, with Stone catching three passes for 27 yards and Jackson Green catching two for 23 yards.

The West offense was more diverse than it had been in week one. The Colts had better success with the passing game as they tried to keep Clay’s defense from keying on the run, and Stone and Lathery alternated at tailback in the second half to keep both players fresh.

“We were scrappers, battlers, but we’ve got to learn to tackle better,” Gilliam said. “We’ve got to work all (this) week on how to tackle.”

Clay scored on its second series on a 15-yard run by Deon McCulley, who rushed for 156 yards and two touchdowns, but West answered to take the lead for good with an eight-play, 57-yard drive.

West will face a dangerous offense of a different sort Friday when the Colts face South Laurel in their third straight home game. South Laurel (2-0) has outscored North Laurel and McCreary Central 82-14 in its first two games, and the Cardinals have thrown the ball 47 times with only 50 rushing attempts.

“Those guys are good, and they can sling it around. They light the scoreboard up,” Gilliam said.West defeated South Laurel 35-34 last season in London.

Stone said the Colts are “nowhere near” where they want to be after just one win, but he said the victory was exactly what they needed after a rough start to the season.

“It got us on the right track,” he said. “Let’s just say that it definitely helped us.”