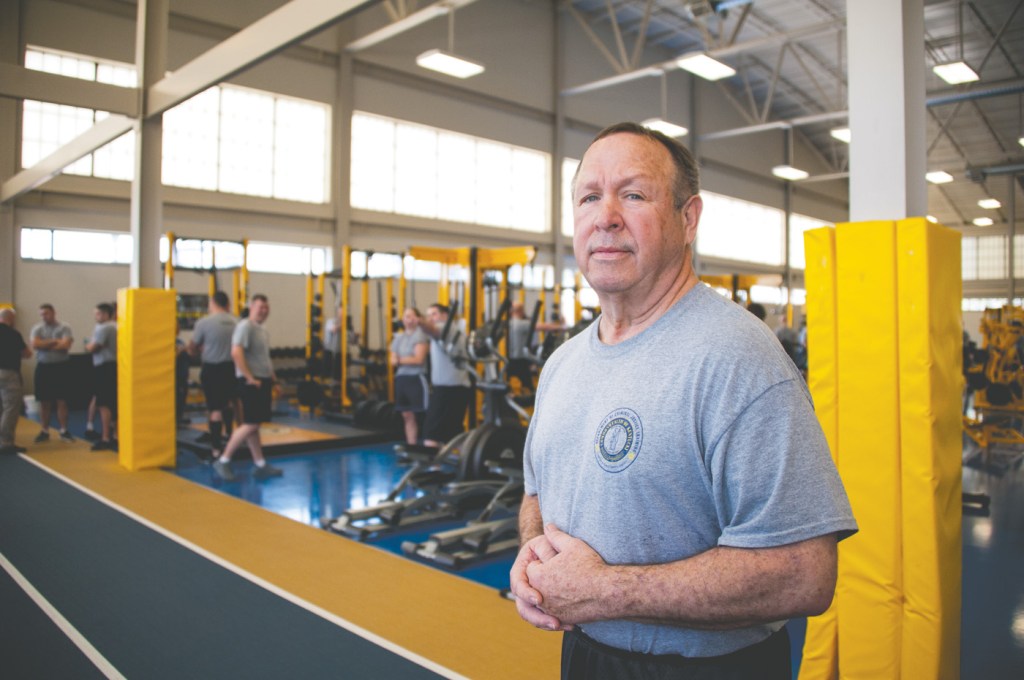 For most people who made a nearly-three-decade career as a public-school teacher and administrator, retirement means traveling and relaxation.

Retirement was the stage of life 64-year-old Bill Cruce found himself in in August 2013. But retired life didn’t last long. It lasted one weekend, to be exact.

A former teacher of industrial education at Jessamine County High School from 1987-97, it didn’t take long for Cruce to decide on his next career – law enforcement. On the Monday following his retirement from the school system, Cruce put on a Mercer County Sheriff’s deputy uniform and reported to work.

“I don’t think (Mercer County Sheriff Ernie Kelty) planned on me coming in Monday morning and putting in 40 hours a week for four years for free, but that’s what I did,” Cruce said. “I’ve never been one to sit around … I want to be active.”

His time as a reserve deputy was invaluable, Cruce said.

“I rode with other deputies; I learned tons of things from them,” Cruce said. “Kelty sent me to every training that was available. I’ve been to New Mexico twice for training … any and all training I could take, he sent me.”

A few years into being a reserve deputy, Cruce began a CrossFit class to get into better shape, and it has paid huge dividends.

“I lost a lot of weight; about 50 pounds,” he said. “So the law enforcement people in my area started noticing that I could physically do the job, and I had the determination and desire to do the job.”

After spending four years as a reserve deputy, a paid position opened following a retirement. Cruce was offered and jumped at the chance to attend the Department of Criminal Justice Training’s Law Enforcement Basic Training Academy as a member of Class No. 490. According to DOCJT records, Cruce is the oldest recruit in the academy’s history.

Reflecting on his basic training experience, Cruce, who graduated from DOCJT April 6, said it was quite an adventure.

“I really didn’t know what to expect (when he arrived on Oct. 8, 2017),” he said of coming to the academy. “For my age, going to live in a dorm situation with 34 youngsters was different.”

At first, some of Cruce’s fellow classmates didn’t know what to think.

“It was kind of like talking to your father; you’re guarded in what you say, and how you say it,” Cruce said. “That lasted about a week. After that, it was as if I was their age.”

But still, Cruce was old enough to be the father of the many members of Class 490, but he took the good-natured ribbing in stride.

“They have been a great class,” Cruce said. “Class 490 is a fabulous group of people, and not just because I’m in it. It has a great mixture of people with opposite personalities. I couldn’t be with a finer group.”

Coming to the academy, recruits have to be tough, mentally and physically, to handle the rigors of classwork and physical and defensive-tactics training.

“Being around kids – I call them kids – with unlimited energy, that makes you look at yourself,” Cruce said. “My instructors had to remind me several times that I wasn’t 21 years old, because I would get disgusted with myself that I couldn’t do what the others were doing. At times I felt like I was holding them back, and I should be doing better than I was.”

But, a dose of encouragement goes a long way, Cruce added.

“Everybody here has been so encouraging,” he said. “Class 490, Mr. (DOCJT Instructor Brian) Spencer has been such an inspiration to me. He encouraged me on the first day and every day I’ve doubted myself.

“Without him, and others – (Instructor Joe) Jumper, (Instructor Chris) Sizemore and (Instructor Josh) Ernst – I wouldn’t have made it,” Cruce continued. “There were days I doubted myself and they’d look at me and say, ‘We have no doubt that you’re going to succeed here.’”

And succeed Cruce did.

“I still can’t believe I’m graduating from the academy,” he said. “When I started with the sheriff’s office, I hoped that it would happen, but I never really thought it would.”

The former educator who holds a bachelor’s degree in Industrial Arts Education, a master’s degree in education and a Rank I certificate (an instructional leadership certification one must complete to become a school administrator), said the completion of basic training will be among his highest professional honors.

“On April 6, I don’t think there will be anyone more proud than I am when I receive my certificate and I’m a certified law enforcement officer,” Cruce said.

As he enters the profession as a certified peace officer, Cruce said he is looking forward to patrolling and serving the residents of Mercer County.

“I’m going to work in law enforcement until I am physically or mentally no longer able to do so,” he said. “There’s nothing to stop me from going until I physically can’t.”