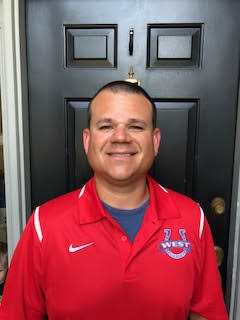 Carter said he looks forward to becoming a part of the WJHS family, building relationships and hopefully winning district, region and state championships.

Carter has coached baseball for 18 years, 13 of which have been at the high school level. Starting his career coaching in 2005 at Bryan Station High School in Lexington, Carter spent his time as the junior varsity and freshman head coach. He then moved to coaching at Paul Laurence Dunbar High School, and recently spent five years coaching at Tates Creek High School, where he went from junior varsity coach to varsity pitching coach and then head assistant.

“I played baseball when I was younger and fell in love with the game,” Carter said. “I always loved the mental aspect that baseball required, which is why I got into coaching. Preparation, planning and strategy are such a big part of the game.”

Carter said his coaching philosophy involves planning, preparation, dedication and hard work. A strong believer in student-athlete, community member and family first, Carter said he believes in pushing his players to achieve their goals through hard work and dedication.

“I also believe in keeping open lines of communication with players and building long-lasting relationships with them,” Carter said. “I am a very hands-on leader who is extremely structured and organized. I like schedules and routines. I encourage my coaches to use their strengths to balance my weaknesses and give input on important decisions.”

Carter said one of the biggest challenges in high school sports is the balance of life and players time between family, school, sports and social time. As head coach, Carter said he believes in being present in the moment and giving everything for the two hours players are at practice or games, and then allowing players to have the time for other things in their life.

“I believe student-athletes are just that, students first,” Carter said. “I also believe in giving them time off so they can have time to do other things.”

Carter’s plan for practice is to focus on fundamentals as players will engage with their position coaches learning the skills necessary for their success. Carter believes this routine builds muscle memory and helps lead to repeated movements. Team philosophies and plays will also be taught, as well as competition teambuilding exercises.

“(As for my offensive philosophy), I love to be aggressive,” Carter said. “We will get runners on, move them over and hopefully get them in. I believe in breaking the game into seven mini-games (and) trying to win more mini-games than the other team.”

Carter said pitchers must get ahead of hitters and challenge them to put the ball in play.

“For the upcoming year I hope to have a competitive team that supports one another and never gives up,” Carter said. “I would love to see us win the district tournament and compete for a regional title.”