ANGLERS OF THE YEAR 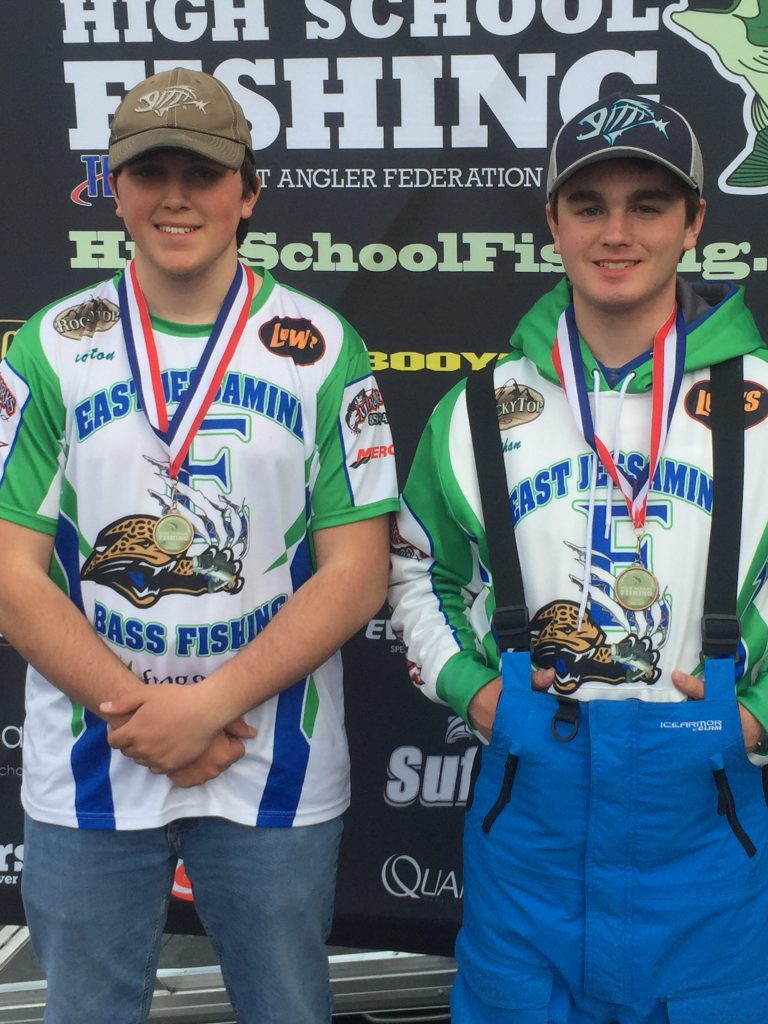 Photo submitted Braxton Lamb and Nathan Marshall were named the 2018 Anglers of the Year in the Ky Bass Nation High School Trail. They earned first place at Herrington Lake, fifth place at Kentucky Lake, third place at Green River and seventh place at Cumberland Lake, and finished the season with 1,142 points out of 1,200. Both are seniors and will be freshmen at the University of Kentucky in the fall. They will compete at the state championship in September. The pair had a great season going to nationals on the FLW side by finishing second out of 183 teams on Lake Cumberland in November. They also double qualified in March on the TBF high school side.

Jessamine County’s own Braxton Lamb and Nathan Marshall have been named 2018 Anglers of the Year in the state of Kentucky.

These long-time best friends feel honored to have received the award and said nothing has quite felt as good as this achievement.

Not only were they named the best anglers, but the pair has seen success throughout the entire season.

They won first place at the Herrington Trail, fifth at Kentucky River, third at Green River and placed in many other tournaments.

Lamb said it feels like he finally made it over the hump in winning this award.

“It feels pretty good,” he said. “We have won a little bit over the years, but nothing like this before. Nothing has ever felt this good.”

Marshall said it is a great honor.

“It is a really big privilege,” he said. “It was really good to get it our senior year. It took four years to get it and two years ago we came in fourth. It was really rewarding and also cool to get that victory, finally.”

Lamb said the key to their success in recent tournaments has been all about the preparation.

“We have always went down to the lake one or two days before and always pre-fished,” he said. “We had to get to know the lake a little bit. We mostly live on Herrington, but we know where mostly all of them are so we fish one or two days early to get a feel of the lake. Like what it is doing at that time of the year and getting our tackle ready the day before. We do things like put our line and lure on, and other stuff like that.”

Marshall agreed and said it is all about practice.

“We have been able to do real well because of practice,” he said. “We have not done well before so we persevered, kept our heads above water and stayed on these fish. It takes a while to catch the fish that we have and we owe a lot to our boat captain and coach. We have not gotten down on ourselves when we have not gotten anything. We always stayed positive and kept it going.”

Lamb said he has stuck with fishing for so long because there is no telling what the water will bring.

“You just never know what is going to happen,” he said. “I have gone out a million times and caught nothing, but the one time I have gone out I catch a big fish and it just keeps me going. Those moments are why I keep doing what I do and it makes me want to do it everyday.”

Marshall said fishing is like trying to solve a big puzzle.

“I enjoy the challenge,” he said. “It is a really big puzzle. No time on the water is the same and it is real rewarding catching these fish. Another reason why I enjoy it is because I have met some good friends and a lot of other people other than just people from Jessamine County. I have met people from Alabama, Washington and it is amazing seeing people have the same interest as you and it has really kept me going.”

The pair will be headed to the state tournament in September and Lamb said they will prepare the same for this as any other tournament.

Marshall said they plan to take more of an independent route.

Lamb said the team has been able to see success because they spread good energy to each other.

“Well the most important thing is we have been best friends for five or six years, maybe longer,” he said. “We started fishing ponds and bank fishing first. We tried tournaments six or seven years ago and we just fell in love with it after that, plus we have known each other for a long time. Knowing each other for so long, we have learned each others strengths and weaknesses to elp each other out when we practice. We use each other as motivators.”

Marshall said that without Lamb having his back, he would not be nearly as successful.

“I was struggling at Herrington and if it was not for our friendship we would not have done so well,” he said. “that is not the only time its happened either. We just try to pat each other on the back and allow each other to not get down, which is how we have pushed through these tournaments. if one person is down then the whole team is down. We have fed off of each other and learned when to give some encouragement out.”

The pair will be headed to Barren River for the state tournament in September.

Barren River 2 day tournament on the 13th or 14th.

“I was struggling at Herrington and if it was not for our friendship we would not have done so well,” he said. “that is not the only time its happened either. We just try to pat each other on the back and allow each other to not get down, which is how we have pushed through these tournaments. if one person is down then the whole team is down. We have fed off of each other and learned when to give some encouragement out.”