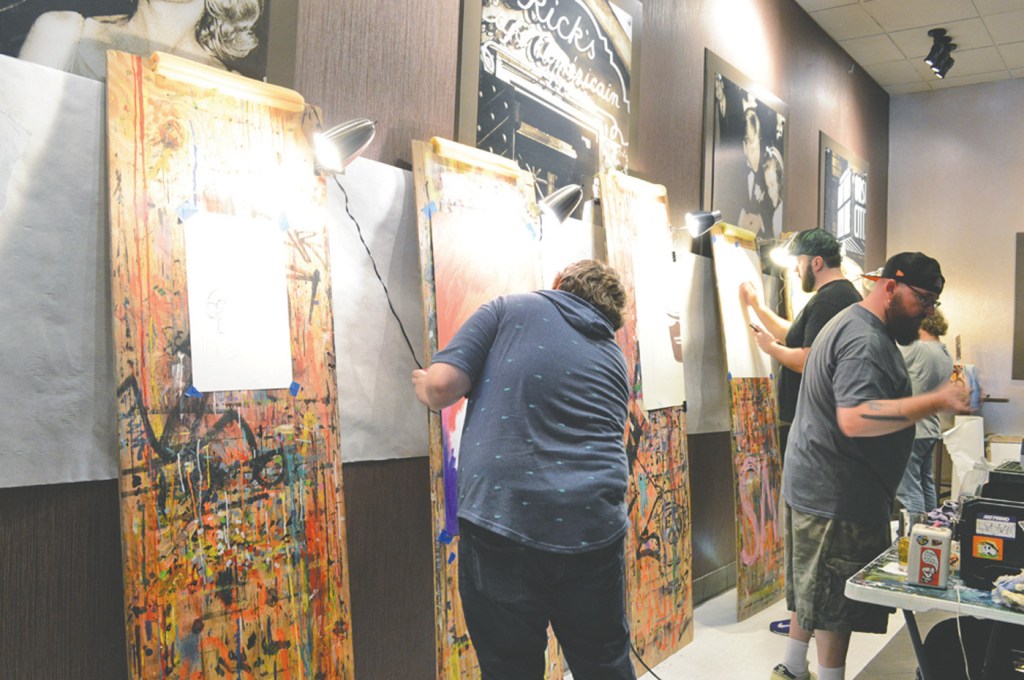 Greeted with the familiar smell of freshly-popped popcorn and the allure of upcoming films, Movie Tavern visitors now have the opportunity to catch extra evening entertainment through a new event, live art of cinematic proportions.

Last month, several artists from the traveling live art group Six Bomb Boards gathered to unleash their creative talents around the theme of popular film on six wooden boards lining the left wall of a dimly-lit bar area of the local movie theater.

Although involved in various artistic endeavors, Justin Stewart, founder of Six Bomb Boards, stood in front of the six wooden boards that night constructing a colorful depiction of Frozone in honor of the recent release of “Incredibles 2” and invited others to join him.

Six Bomb Boards began in 2009 following a friendly gathering of artists in Stewart’s garage. At its conception, Six Bomb Boards only featured a few artists. Now, it showcases an array of talent from various locations including Indianapolis, Chicago and West Virginia.

Stewart said initially the name of the group was going to be Six Blank Boards, but eventually changed its name to Six Bomb Boards as “blank” did not sound “cool” enough. Bomb, he said, is a slang term used to describe creating a large and/or multiple graffiti pieces in one night.

“It rolled off the tongue better,” Stewart said.

Later that year, Six Bomb Boards performed at the Movie Tavern for a showing of “Star Trek” directed by J.J. Abrams.

Though the group does perform at other venues, including bars and art spaces, Movie Tavern has become its regular set up, and the group frequents there at least once a month.

Stewart said to bring in a crowd he uses social media and word of mouth. From there, he lets the movies do the rest by strategically picking a popular film that may create a buzz and attract a lot of visitors.

Each art piece created at the live art event is inspired by the most popular film at the time. Last month’s artwork spurred from “Jurassic Park: Fallen Kingdom” and “Incredibles 2.”

During each session, Stewart rotates artists on the boards, and once one piece is finished, the next begins. Some nights, artists can paint up to two or three pieces of artwork.

In most cases, every art piece created on the Six Bomb Boards is up for grabs by those watching. All movie-goers have to do is ask. Stewart said most of the pieces sell for around $60, and some artists take requests and commission specialty pieces.

“That’s a pretty great deal considering you get to sit and watch it get made starting from a blank piece of paper to a fully-formed piece of art,” Stewart said.

The largest crowd-generating movie Stewart has worked so far was “Star Wars: Return of the Last Jedi,” which was released last December.

“I was thinking it was going to be some Marvel movie, but no it was Star Wars,” Stewart said.

Normally, artists who participate in the live art event are given the opportunity to attend a late night showing of the movie at the end of the session. However, the particular night “Star Wars: Return of the Last Jedi” premiered last December, every showing of the film had been completely sold out.

Super “jazzed” anytime a comic book-related movie releases, Stewart said the Star Wars films are the events he enjoys working the most.

“I always end up doing two or sometimes three pieces of art on the Star Wars night just because that’s my jam so to speak,” Stewart added.

Art and comic books seem to be the revolving theme around much of Stewart’s day job as well.

Currently, he works part-time as a graphic design artist for KET and fills his schedule with digital coloring and artwork design for comic books.

He has also worked for larger companies including Disney, Marvel, Sony, Image Comics and Graphitti Designs; and has worked in the past with artist Jim Mahfood for more than 10-years. Coloring Mahfood’s art most recently on “Grrl Scouts: Magic Socks” from Image Comics, Stewart has also collaborated with Mahfood on a Marvel Spiderman comic.

Deemed the “Super Art Guy” for the Lexington Comic and Toy Convention, Stewart has also served as the official event artist for the convention over the past five-years.

“Any artist of any skill level is always invited to come out,” Stewart said. “It’s a great excuse to just get together and be creative. There’s a certain vibe that happens when you get artists in a room and we’re all drawing and painting at the same time, it’s really cool.”