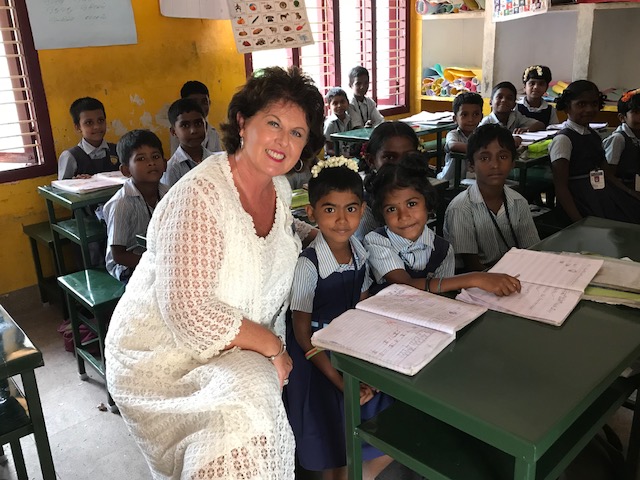 After leaving her position as Jessamine County School’s Superintendent last June, Kathy Fields took the position of executive director for International Alliance for Invitational Education, and a recent trip to India has changed her life forever.

“In 2017, upon announcing my plans to retire, I was approached by the IAIE board to apply for their CEO position as executive director and took over the leadership position following my retirement,” Fields said.

After a long career in Jessamine County, having served as principal at Nicholasville Elementary School, interim principal at West Jessamine Middle School, director of curriculum, chief academic officer/assistant superintendent and superintendent, Fields said she was approached by Randy Adams with Fishhook Ministries in Wilmore about meeting with administrators from a school in India.

“(Adams) indicated that the school was looking for professional learning opportunities and that Invitational Education may be a good match,” Fields said.

Fields presented school administrators in India with information about her previous work with the Invitational Education and teaching workshops she had conducted in China.

She said they were interested in learning more about the concept of Invitational Education and Fields was interested in helping them.

“(They) shared with me the challenges facing their school which included working with children who were first-generation learners, teachers with limited teaching pedagogy, parents who did not understand or value education, the cultural issues related to educating females, female infanticide, students and families with HIV and significant lack of funding,” Fields said. “They further explained that the equivalent of $20 U.S. would pay the monthly fee for a child’s education, but with the daily wage the equivalent of $1.25 U.S., parents were hesitant to invest in the education of their children, especially girls.”

The administrators told Fields they lacked the necessary funds to bring experts to India to help. Understanding how to work with impoverished students and families, Fields struggled with the concept of children who would be first in their families to receive an education. As she shared the needs with her family and husband, she felt more certain she was being called to help.

“Upon arriving in India, I was immediately overwhelmed by the lack of clean water, appropriate hygiene practices and environmental conservation,” Fields said. “I saw bodies of water that were unrecognizable because of the trash floating on top and animals roaming the streets, many eating from the trash piles along the side of the road. Prostitution was rampant, often the only choice a woman had to literally survive. HIV has rapidly spread, with many wives as young as 16 years old only realizing the impact of the disease when the husband died. Women then realized they were infected and had given birth to children who also had the disease. Families lived in thatched-roof huts with dirt floors.

“While illegal, the caste system was very much recognized. Being a woman in a male-dominated culture was a huge challenge.”

Fields said she was reminded of the opportunities women in the U.S. have that are not afforded to other women around the world.

“In the Indian culture, the man has all power over a woman; at birth, he can decide if she will live,” Fields said. “Males are valued but girls are deemed just another mouth to feed and may be left to die at birth. Men decide if she will be educated or put to work in the fields. Arranged marriage is practiced and commonly girls are given to their maternal uncle as brides as young as 13.

“Even women who are educated must relinquish their profession if the husband deems it necessary.”

While there, Fields presented to the directors and head teachers of the school and college, many of which were graduates for the secondary school or college and worked for 11 months of the year. Fields said when finances run short, teachers often go without pay.

Fields job was to present an overview of the tenets of the Invitational Education and lead administrators through multiple discussions related to the needs in their school while working with parents and conducting a campus-wide walk in order to create a more inviting environment. Fields also met with the administrative team to brainstorm solutions to problems related to funding, teacher salary/benefits and parental and cultural issues.

Each child at the school was infected with HIV, Fields said. Three children had died that spring, and 107 new cases had been diagnosed that year. Classrooms were small places that housed 40 students, grades kindergarten through 12th. Because of cost, technology is nearly nonexistent and chalk is considered a precious commodity.

“Yet, each child seemed to realize and appreciate this ‘gift’ that education provided them,” Fields said. “I will forever remember the impact of a child who smiled and said to me, ‘I am happy to get to go to school,’ while being reminded of the many times I had heard children in my U.S. school district bemoan ‘having to go to school.’

“After speaking with the support staff, who were also HIV positive, I reached out to hug them to thank them for their work. I was emotionally overwhelmed when my translator told me the women could not believe that ‘a white, educated, woman from the U.S. would ever touch them.’ All I could think about after that humbling experience was, ‘except for the grace of God, go there I.’”

Fields said through her time in India, she learned the world is a small place and people all dependent on one another. She learned the light in the eyes of a child transcends all race and creed, she said, and to think twice before complaining about minor inconveniences. She has vowed to pay more attention to world events and to take civic action seriously.

“Upon returning from India and going through U.S. customs I became very emotional,” Fields said. “This trip made me realize and appreciate the many freedoms and blessings I enjoy as an American. Upon landing in Chicago, I was not met by armed guards with sub-machine guns. I washed my hands in clean water. I ate food prepared in sanitary conditions. I would rest that night in a home with wood flooring and sleep without fear of sexual assault. I would hug my precious grandson knowing that he would always have the best of medical care. I would be greeted by a wonderful husband of my choosing. I would not have to watch my family die of a horrific disease due to the lack of knowledge or care. I had been free to receive an education and to speak without fear of repercussion.”