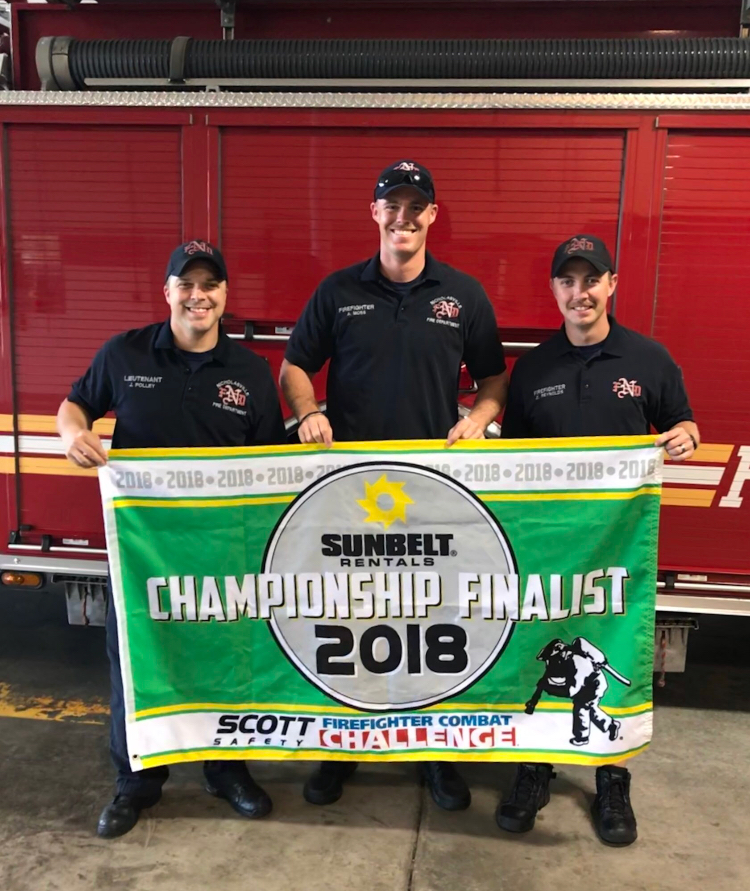 Earlier this year, three firefighters from the Nicholasville Fire Department competed in the Scott Fire Fighter Combat Challenge at the Fire Department Instructor’s Conference in Indianapolis, where they qualified to compete in October at the World Competition in Sacramento.

Joshua Polley, Aaron Moss and Zeke Reynolds successfully became the first team in Nicholasville to compete and qualify for the world competition.

The team of three got together only seven months ago and started training and working for their first competition last April. Their goal was to complete the challenge in less than two minutes, which they did by successfully finishing with a time of 1:58.

“The good thing with us running is it gets Nicholasville’s name out there because we will be all over the country,” Moss said. “It shows the community we take our job seriously. Not just when we are clocked in, but every day because we put a lot of our own time and we sacrifice family time and money to do this. It is to better ourselves, to better the department and to better the fire service as a whole.”

Polley has served with the NFD for 13 years.

Reynolds started as an explorer when he was 16 until the time he was 18-years-old in Pulaski County. He was then hired at the Somerset Fire Department and later transferred to the NFD in 2016.

Moss served as a volunteer in Pulaski County and spent time working in Montgomery County before landing his current job at the NFD. Moss also serves time in the National Guard.

“They originally started this course for people coming into fire service to see if are you physically able to do this job,” Polley said. “As it evolved, it evolved into a competition to see how quickly you could do this.”

Only open to firefighters and not professional athletes, the competition consists of five events where the firefighters are required to wear full gear. Starting at the bottom of a five-story tower, the race starts by carrying a 42-pound rope up the steps to the top of the tower where it is then dropped and the firefighter is required to hoist another 42 pounds of rope up from the ground into a crate on top of the tower.

The firefighter then descends back down the tower carrying the same 42-pound rope he climbed up with. Competitors must then utilize a Keiser Force Machine using a provided nine-pound mallet, and with both feet on a diamond plate, the competitor is required to drive a 162-pound steel beam a horizontal distance of five feet.

Then comes the hose advance part of the course, where competitors are required to drag a fire hose through the course without missing or knocking over any delineator. Once through a set of swinging doors, the competitor must open the nozzle and successfully hit a target.

Finally, a victim rescue ends the course with the competitor lifting and dragging backwards 106 feet a “Rescue Randy” weighing 175 pounds.

Penalties are given throughout the course for various reasons. For example, on the way up the five-story tower, firefighters are allowed to skip steps while climbing. Coming back down the tower, the firefighter is required to hit every step in sequence. Typically, the event is run with five firefighters to a team. NFD has only three.

“We are having to share and when you go to these events and you are doing multiple races in a day you have to switch up what you are doing,” Moss said. “You can’t run the tower 10 times, you can’t do it. Where we only have three people, we are switching it up and we are still going to be doing multiple events on each race compared to these other teams that have five people.”

To prepare, the team works out every day a minimum of one hour. Trying to commit to cardio in the morning and weights or a mini-course in the afternoon, the team puts in what their shifts at the NFD will allow.

“The bad thing about Nicholasville is we have a policy where there is no building over three stories tall,” Moss said. “That makes it hard to train for a five-story tower. I go on my off days to the University Kentucky parking garage that is six stories tall and run stairs there.”

Polley said the competition inspires job readiness and being as physically fit as you can to do the job.

“We have known for years one of the biggest killers of firefighters is heart attacks and it comes from having the stress of the job,” Polley said.

Moss agreed. He said 45 percent of firefighter deaths are from heart-related issues with studies showing most of them are from overexertion and stress. In fact, in 2016, Moss said, 132 first responders committed suicide and that number goes up every year. Statistics, he said, are linked to the calls which come back to haunt the first responder, substance abuse, poor nutrition and poor physical fitness.

“With this (the competition) it helps you physically and mentally,” Moss said. “It teaches your body and mind to work under a stressful environment so when you get to a fire, and you have 100 things happening, you are already trained to put the stress aside and be able to focus on what you are doing.

“Studies show if you have poor physical fitness and you add poor nutrition, you do not feel good. You don’t feel good about yourself and you don’t have a positive attitude which leads to family issues and life issues. All that on top of itself is becoming overwhelming. Part of this is to promote physical fitness, to promote brotherhood, to promote the family and just to have fun.”

Overall, the team agreed the amount of positive feedback they have received is uncommon and the fire department as a whole has been nothing but supportive. The competition, they believe, will serve as an opportunity to meet people so the rest of the world can learn more about the NFD and where they live.