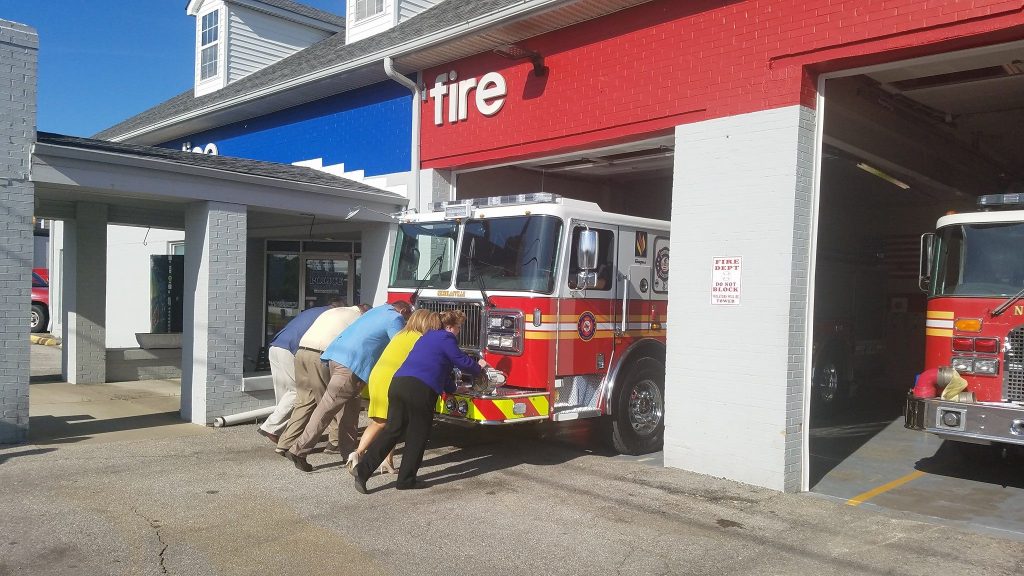 The Nicholasville Fire Department welcomed a new fire engine into its fleet Monday.

The purchase came after consideration of the National Fire Protection Association’s recommendation to replace a frontline engine every 15 years and moving it to a reserve status where it will then only be used when another engine is out of service.

“A lot of people say it was an emergency purchase, it was not an emergency purchase. It was an opportunistic purchase was what it was,” Fire Chief Mark Case said. “We talked about replacing it for the last two to three years. Things happened that put it on hold and pushed it back. The big thing that happened was concerns over the retirement system and how they may have to contribute more money.”

Case said the fire department started talking about purchasing the new engine after the company which built the truck stopped through their office at Christmas time and handed them a flyer for a truck coming off the line in February.

The truck was considered a “fast track truck” because it can be built and available for purchase to any department and does not have its specifications hand-picked by that department.

“The truck they had was identical to this one,” Case said referring to one of NFD’s more recent engines. “I put it on the top shelf because I knew we were not ready to buy anything. It wasn’t a month or so later when commissioner Blackford came to me and asked, ‘Are you ready to buy that truck?’ I said, ‘I am ready whenever you guys are ready.’”

City Commissioner Doug Blackford asked the department what kind of truck they wished to purchase. It was then Case handed him the flyer he had received from the manufacturer in December. After looking at all the trucks specifications, it was determined the new engine was almost identical to the one the chief wanted to model their new engine after.

“It was good financial sense to go on and buy this truck while we had the opportunity because it is a long process to sit down and see it out and go through the process,” Case said. “It is typically a year-long process (when buying a new engine).”

Being a first-come first-serve engine, the commission had to act quickly. Case said the finance committee also contributed and worked quickly ensuring the purchase of the new engine.

“It was a good group effort to make this happen,” Case said. “We had the opportunity to buy a truck identical to the one we had and we jumped on it. We’ve had engine one for over a month now just sitting there. If it was an emergency purchase, we would have had to put it right into service.”

Deputy Fire Chief Craig Cox said some people have made mention the engine purchased was a demo truck.

“It wasn’t a demo,” Cox said. “When we went up there to look at it in Wisconsin, it had 13 miles on it. It had not been demoed anywhere. It was only our’s from the start.”

Most of the only differences on the truck were upgrades being that this engine is five years newer than any they currently have in their fleet. The plan is to continue to buy a new truck every five years in order to achieve a good rotation. Case said NFD purchased the old engine one, which will now be known at engine seven, in 1999. Engine three and truck one were purchased in 2003.

With three trucks being bought around the same time, they are now getting to the age where the fire department needs to start thinking about replacing them.

“If you get on a five-year rotation it is not such a hard hit because those are expensive trucks, “ Case said. “(The new) engine one was over half a million.”

Through the whole process, Case said NFD has had the support of the city commission the whole time.

“The commission fully backed it,” Case said. “The finance committee fully backed it and we had their support. They were working on it and it was a big group effort.

“We put our heads together and said, ‘hey this is what we need to do.’  Buying that truck actually saved the city money as far as planning, traveling up there and the time put into it. It was a smart purchase on the city’s part.”