Never too late for love 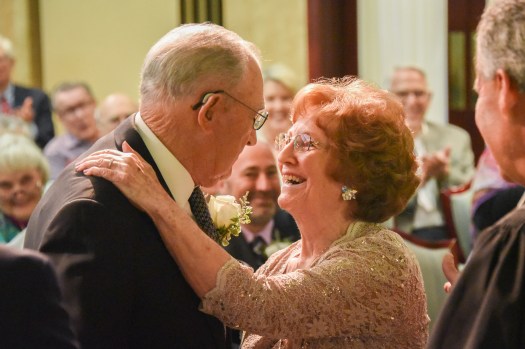 At 95 and 76, Stovalls wed at Wesley Village

Art and Nancy Stovall reconnected at a New Year’s Eve dance at Wesley Village a few months ago. Although no stranger to each other — having known one another for more than 20 years — the two quickly fell in love and were married last month as 226 people gathered to watch their union at Wesley Village, one of the largest crowds the center has ever seen.

“Going into this, he is 95 and I am 76 with Parkinson’s disease,” Nancy said. “We agreed whatever time we have left, if it is a day, a month or even a year, whatever it is, that is God’s gift. We knew He was in this, and to refuse that gift seemed to be wrong. It seemed like a lack of faith. We knew he was bringing us together.”

Art became a widower two years ago after his wife of 73 years passed away. Nancy has been single for 22 years after a divorce from her previous husband.

She said she was not looking for anybody when she came to live at Wesley Village.

“I came to Wesley Village because my last child moved from Lexington to Alabama,” she said. “My children were concerned because they wanted someone to be there for me. I was diagnosed with Parkinson’s 15 years ago. I wasn’t looking and I knew I had a lot of healing to do.

“Wesley Village is a tremendous place to be, it is a healing place. There is so much love and concern.”

Having known Art through church connections, Nancy said she felt safe around him and would find he would sometimes come and sit with her during a social function. Living in the encore area of Wesley Village, Art claims Nancy kept disappearing and he finally told her that he was after her since a code prevented him from following her home.

Having a love for dancing, Nancy said she and Art practiced dancing to a Nat King Cole slow song in her apartment before going to the New Year’s Eve party earlier this year.

“I love to dance all my life,” Nancy said. “But the Parkinson’s robs you of that. It won’t allow your brain to control muscles and feet to dance. When we got up there, they started playing a fast song and it just kept playing. I thought I was going to fall on the floor. It was one of the best nights we have ever had. I didn’t know he could dance.”

Although Art claims he is no dancer.

The couple got engaged in January shortly after the New Year’s Eve dance when Art came to see Nancy after she had been sick for a week. Finally feeling well enough to clean up the dishes, Nancy said he came to her door and said the two needed to talk.

“Picture this: I had on a flannel nightgown and hadn’t brushed my teeth or my hair,” Nancy said.  “He said to sit down on the couch. I asked him what about. He said, ‘marriage.’ I thought, ‘oh my gosh what is happening?’”

Her initial response was to tell Art no because of her Parkinson’s. However, Art persisted and told her he didn’t care about her disease. After convincing her so, he asked her one more time what she would say. Nancy said her heart was so touched, and she said ‘yes.’

“It is a God story,” Nancy said. “It was so out of our control and the feelings that we were feeling, it was like God was giving us both a gift. Because he was lonely and missed his wife and I loved his wife — we were friends from Sunday school.

“When we had the wedding and he was given the vows to say, Art said ‘I will,’ and kissed me but it wasn’t time to kiss me. We felt God was in this in so many special ways.”

The key, Nancy said, is to love each other and see what the other one needs, as well as being willing to be there for one another.

“I am slower than I was, and he is a little bit forgetful but we laugh about it,” she said. “The more I am with him and love him, the more that love is so strong and I know that is a God thing.

“It couldn’t be that way as a human thing, it can’t be but only when God is in it.”