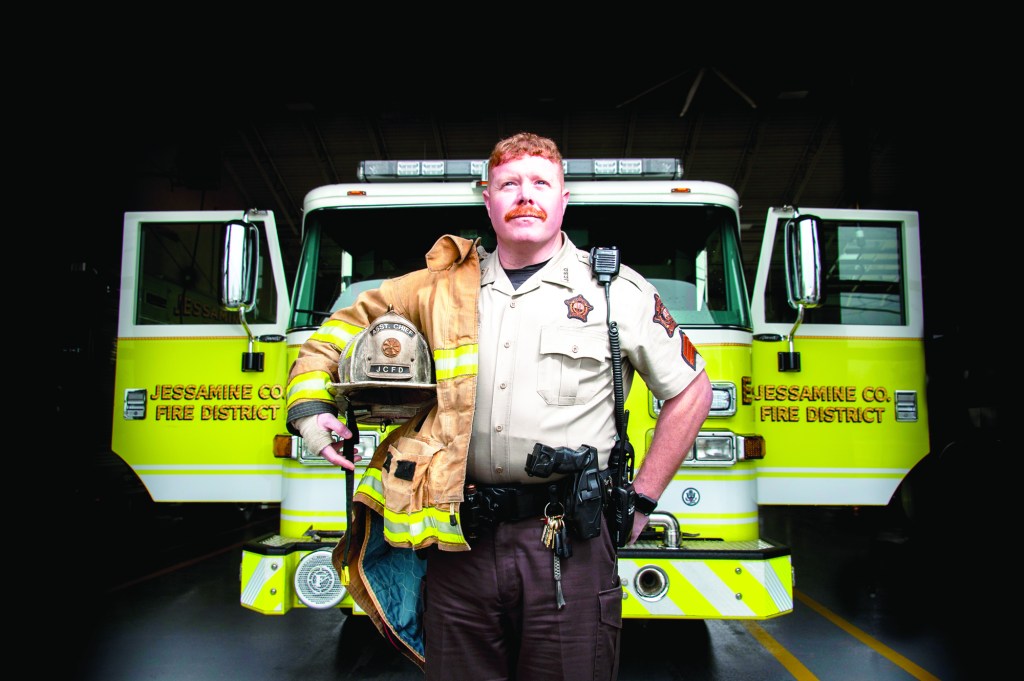 By Michael A. Moore

Like many who work in law enforcement, Jessamine County Sheriff Sgt. Gerald Wheeler works four 12-hour shifts each week, serving a community he grew up in and loves.

Over the course of his 15-year career, Wheeler has responded to everything from criminal complaints and serving papers, to working countless vehicle accidents and robberies.

“That was funny,” Wheeler said of the impersonator. “He didn’t give me any problems. He was intoxicated, and he sang songs on the way to the jail. He sang “Jailhouse Rock” when we pulled into the jail.”

It is safe to say, Wheeler is passionate about his career and community.

But he is also passionate about something else – firefighting. In addition to his law enforcement career, for 20 years, Wheeler also has served the Jessamine County Fire District, rising to the rank of assistant chief in 2012.

For Wheeler, being a peace officer and firefighter both are ways of giving back to the community that has given so much to him.

“I love Jessamine County,” he said. “This is my home and I give it my all; and they’ve given me their all. I work for the residents.”

Wheeler’s public service passion can be traced back to his father, Mike Wheeler. The elder Wheeler served as the JCFD chief until his line-of-duty death in January 1993.

His footprint is that of service to the sheriff’s office and the fire district – two different entities that have similar goals – serving the people of Jessamine County.

In his role as a sergeant with the sheriff’s office, Wheeler is in charge of the day shift and oversees five deputies.

As assistant fire chief, he finds himself in a command role.

“I don’t get to play hose jockey and fight fires like I used to do,” he quipped. “I have to be on scene and make sure my guys are doing what they’re supposed to. I do a lot more reports now.”

The essence of his commitment in both areas is community – whether it be community policing or simply being involved.

“I believe getting out and talking to the public is important,” he continued. “I had a number of kids I taught at 4-H camp, and they ask a lot of police-related questions, and I answered them.”

In his role with the fire district, Wheeler is equally involved in the community.

“I’ve gone to several homeowner-association meetings and talked about ISO (Insurance Service Office) – that is an insurance rating – and explain what the fire district is doing to keep their rates as low as we can make them.”

Policing and firefighting have a lot in common, Wheeler said. There are times where his training in one arena comes in handy in the other. Through his fire training, Wheeler is a certified first responder.

“It’s basically an EMT,” he said, “but there are some skills an EMT can perform that I cannot.

“A few years ago, I followed a fire run on the Champions Golf Course (near the Fayette County line). EMS was a ways out. Because of my medical training with the fire department, when I got there. We saved the guy’s life by defibrillating him,” Wheeler added.

“For our department, we set ourselves up a little higher,” he said. “We train twice a month and we get four hours [of training] each month. Our policy states that firefighters have to attend 50 percent of the training each year.”

Skill areas Wheeler trains with the fire district can range from ladder raises and technical rescues to ropes and ventilation, he said.

The key to balancing Wheeler’s duties is understanding the nature of the role he is performing at the time.

“If I get to a wreck and I’m working for the sheriff’s office, obviously I have law enforcement duties to do, Wheeler said. “But at a house fire, I keep people back and I see something that is dangerous, I will tell (the firefighters), because I’ve been doing this for quite some time, and I know how to read a fire.”

In those instances, Wheeler said he has to trust the firefighters to do that job while he handles the law enforcement side.

On the flip side, when Wheeler is in his assistant fire chief role, there have been times when a fire call bleeds over into his sheriff office duties.

“In those situations, I’ll stay with the fire department until I can clear,” Wheeler said, adding that Jessamine County Sheriff Kevin Corman is extremely supportive in those situations. “If it is still an active scene, I will stay there until it is stable, but if I can rush up my part, I will. I can trust my officers to respond and turn it over to them. Additionally, (Fire Chief Mike) Rupard is usually on the scene as well.”

“When I have a Friday through Sunday off from the sheriff’s office, I give it to [my family],” he said. “My wife knew what she was getting into (with this career). But when we had kids, it was me that changed. I want to spend every living minute with them.

“That’s the biggest thing in my life, and it’s important that I give back to them because I take a lot away. It’s a balancing act — it really is.”