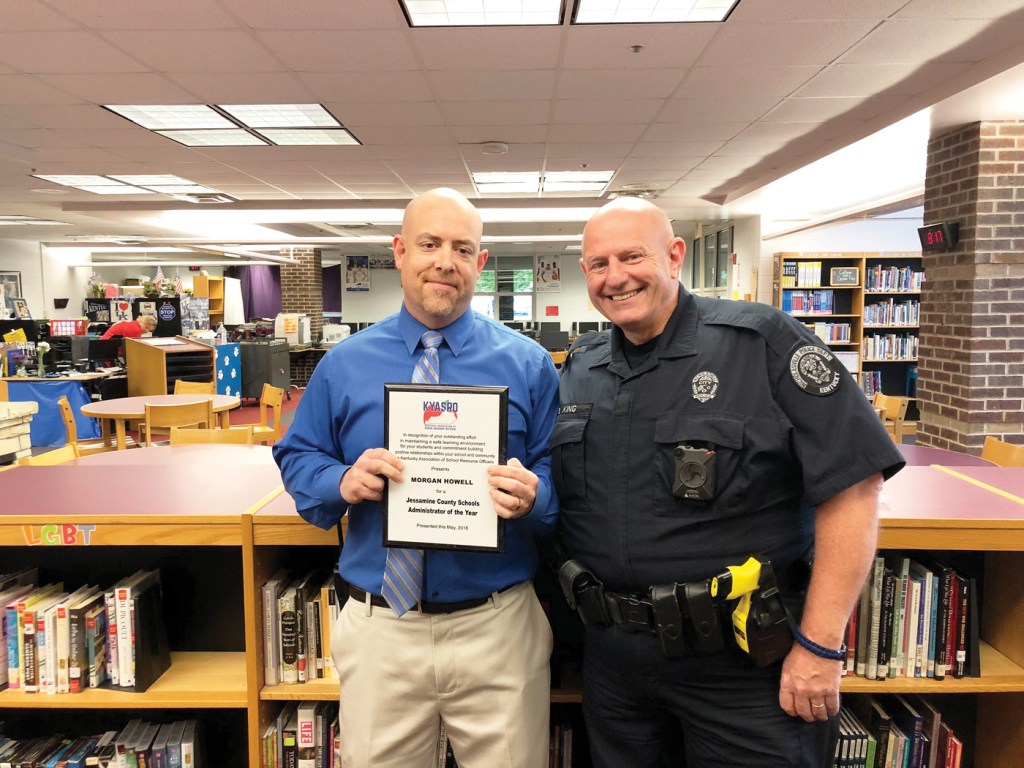 School resource officer’s Billy King and Sam Wade of the NPD presented Howell with the award.

The program’s mission is to support SROs and schools across the state as they continue to seek to offer safer environments for their students.

“(Morgan) never stops at disciplining students for breaking school rules or laws,” King said. “He takes a much deeper approach and attempts to determine why the behavior exists. His leadership style is not only to discipline but to educate and counsel students.

“He uses his own life experiences to build bridges with students and connect with them on a personal basis. This results in a positive relationship through his disciplining them and holding them accountable for their actions.”

Currently, King said there are 300 SROs in Kentucky.

Each year, the Nicholasville Police Department nominates a different person in the education field for awards. This year was Morgan’s turn to not only be nominated, but win for the work he puts in at EJHS.

“Morgan is the most patient individual I have ever met,” King said. “He somehow finds the time to work with each student on each incident as if they are the only student enrolled at East Jessamine.

“Even though he is an educator by trade, Morgan places his life skills first. He tries to prepare his students not only for a career but also to become an adult on top of all this.”

King said Howell has brought about many changes in his two years as assistant principal at EJHS. Through his time, he has implemented many policies and procedures for school safety and discipline.

Howell said the changes that have taken place have come from the educators in the classrooms.

“I appreciate (the award). It was an awesome compliment,” Howell said. “(Although) it really comes down to what you guys (his staff) have done. I try to facilitate what we have done and it is based on you.”

Howell addressed the faculty at EJHS and said when he first took the job, he asked the staff to give it four to five years. He said when the then freshman become seniors, they would hopefully see the biggest changes take place.

“Based on your feedback, we are seeing some of that in the last couple of years,” Howell said. “But even though I appreciate it, and I can’t imagine anything better being said, it really goes back to what you guys are doing in the classroom and the support you are giving.”

Never too late for love