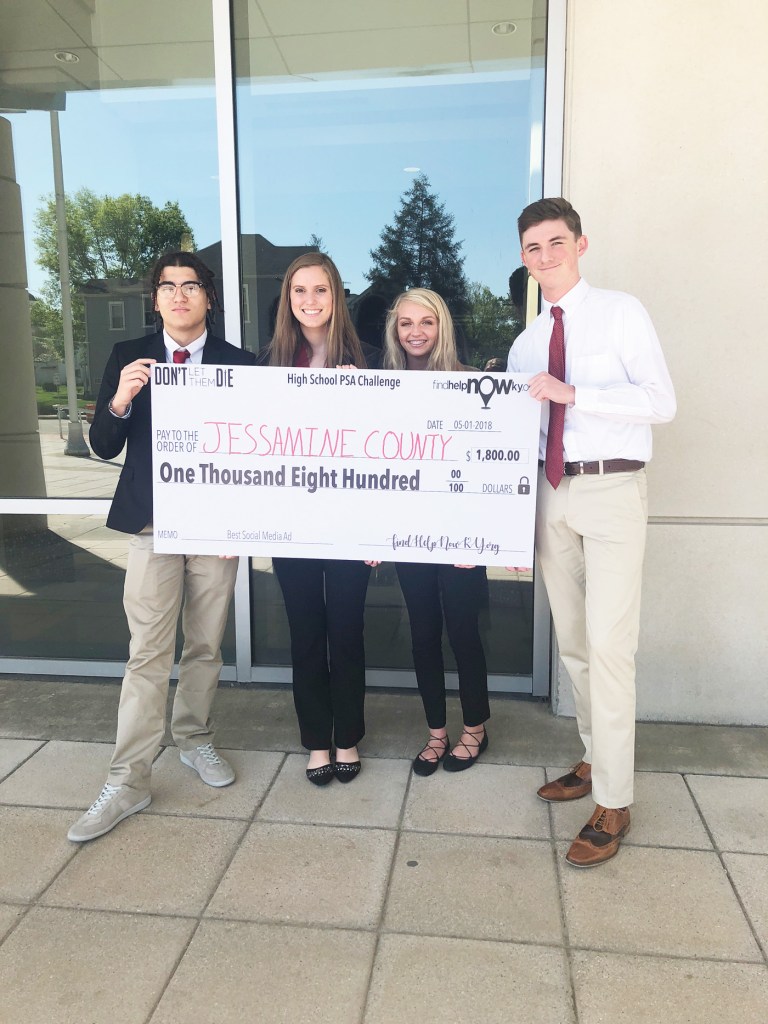 Last month, students from Jessamine County Career and Technology Center presented a “Don’t Let Them Die” opioid abuse awareness campaign in Frankfort where they were chosen as campaign finalists receiving $1,800 for “Best Social Media” campaign and were recognized as top five overall receiving an additional $5,000.

“Catlyn and I are so proud to have these students represent our marketing department, as well as JCTC and Jessamine County,” Business and Marketing Teacher at JCTC Kayla Williams said. “It is an honor to watch all of their efforts come to fruition. Please congratulate (them) if you see them. We are so proud.”

“Our campaign was centered on the theme ‘Don’t let your actions affect your loved ones,’” Williams said. “We carried this theme throughout each part of our marketing campaign. By using this theme we wanted to reach the emotional appeal of our target audience. Our goal was for the abusers to realize that what they’re doing not only affects them but the people around them as well. A young boy was the face of this campaign to further the emotional connection.”

The campaign took about two months to build and Williams said will not stop now that the competition has ended. From a local standpoint, Williams said Jessamine County’s ASAP group has taken an interest in the campaign and said the group is interested in working with JCTC in pursuit of the campaign getting radio ad and billboard time in the area.

Williams also said students became involved with the campaign after teachers came across the competition and joined both the media communications and advertising and promotions classes. The group of students that presented the campaign in advertising and promotions went on to work with the media and communications group to revise and finish the marketing campaign.

Teresa Jones, a student at JCTC, said the campaign is important because it increases awareness.

“It’s important that we increase awareness because in Kentucky especially it’s a huge epidemic that is tearing apart families and taking lives of people who just needed the help to overcome the addiction,” Jones said.

Williams agrees, stating she is hopeful the rising generation can see the dangers of the epidemic.

“The numbers for opioid abuse is beginning to increase in teenagers and being able to quit the habit at a young age is detrimental in living out a successful life for the years to come,” Williams said. “Also, that we have a voice in these crises and that these school competitions can lead to opportunities that can reach people outside of the classroom.”