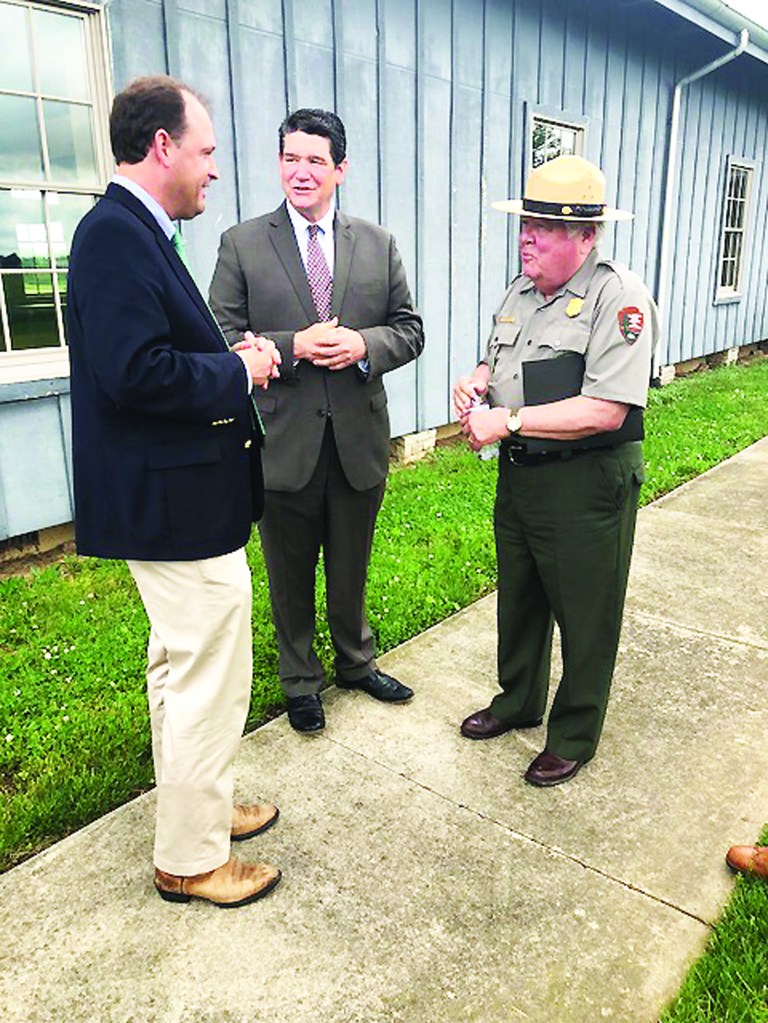 U.S. Rep. Andy Barr welcomed the Department of the Interior National Park Service Director Dan Smith to Camp Nelson May 19 in an effort to host a community forum concerning the future of Camp Nelson and give local stakeholders the opportunity to express their support for the camp’s national monument designation.

“When I had the opportunity to meet with the local citizens, especially the family members and the descendants of the people who enlisted in the Army of Ohio, who were the original refugees at Camp Nelson, they made an impact on me as they do with anyone who talks to them,” Barr said. “Camp Nelson plays an important role in the Civil War and Jessamine County. It is a terrific story about African American history and freedom.”

Barr said he has pursued elevating the story of Camp Nelson to national awareness throughout his time in Washington, and his visit to Jessamine County last Saturday was important to engage the stakeholders and enlist the support of organizations. Barr met with Mayor Peter Sutherland, Judge-Executive David West, and Mayor Harold Rainwater, all who he said were supportive of his efforts.

During his visit, Barr was able to tour Camp Nelson and walk through the interpretation center meeting the many people who have dedicated a lot of time and energy to the camp and what it has become today.

A number of people from the community also gathered at Saturday’s event to talk about Camp Nelson’s compelling story of a journey towards freedom and how it can be used as an educational tool for the country.

“One of the stories told was an emotional one about a newly emancipated man at Camp Nelson who referred to the camp as his Canada,” Barr said. “Because this was the only closest place they could achieve their freedom.”

Barr said Camp Nelson achieving national monument status would be a tremendous accomplishment for Jessamine County. Not only did he say this would mean more tourism for the county, but it would attract more people from around the world which in turn would generate more economic development and tourism dollars.

“It would mean the special story of Camp Nelson, which in many ways is the history of our continued progress towards freedom, would be elevated to a national level,” Barr said. “We know the story of Camp Nelson, and we want to take that story to the rest of the country and the world. This designation would make an enormous contribution to American History.”

“Those were the few blacks that were free in this country because they were serving the Union Army,” Young said. “I have always been proud of that. Growing up in Camp Nelson I always wondering why they did not have more recognition. When this was brought to my attention it made me feel proud.  Words can not describe. It would give us this as the sign of the times and say, ‘hey, we recognize you guys. you are Americans just like the rest of us.’”

Young said many people do not know how many African American soldiers fought and died for this country, not just in the past but in the present as well.

“This is our home,” Young said. “We feel that it is important to our culture and our heritage. Not just African American heritage but Caucasian as well because we actually grew up here together. All they wanted was to be treated fairly and today they are getting recognized for their efforts.”

Barr said that during his time touring the land at Camp Nelson, the sun broke out on a rainy morning and the light shown down on the national cemetery across the way. It was an emotional moment, he said, and he knew at that moment Smith realized the county’s efforts and got the same vision and hope so many people share for Camp Nelson.