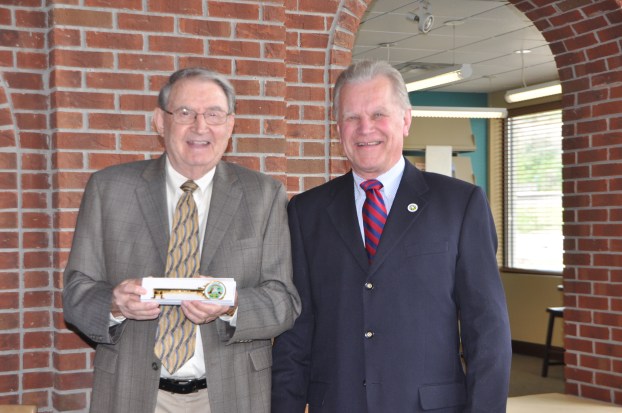 Wyrick receives key to the City of Corbin

CORBIN — On Wednesday, Corbin native Jim Wyrick was honored at various places all over town for his instrumental role in education and advocacy for public libraries. In culmination, Corbin Mayor Willard McBurney presented Wyrick the key to the city.

Wyrick, a member of the 1940s Corbin Fourth Street Mafia (as they like to call themselves), is retired and currently lives in Jessamine County at Wesley Village in Wilmore. He was first honored Wednesday at the Corbin Kiwanis Club meeting at David’s Steakhouse. Wyrick was introduced by both his friend Bob Terrell as well as Mayor McBurney.

Wyrick graduated from Corbin in 1953 and joined the Coast Guard for four years. He met his wife, Gerry, at what was then called Cumberland College. Wyrick was a principal in the Fayette County School System for 20 years and served 14 years on the Kentucky Educational Board.

Public libraries, school libraries and academic libraries, as well as library workers, play an invaluable role in their communities by leading efforts to transform lives through education and lifelong learning, according to Wyrick. He has served as chairman of the Fayette County Library Board and in 2004 he received the James Gugeler Kentucky Library Trustee of the Year Award.

Wyrick specially recognized both the Corbin Kiwanis Club and the Corbin Public Library for their support in the community.

Library funding and bookmobiles were topics of conversation during the Kiwanis meeting. Wyrick noted that a majority of individuals think libraries are state and federally funded. Wyrick said that wasn’t the case. According to Wyrick, in Whitley County approximately 93 percent of the funds come from local government and only around 7 percent from state and federal government.

Mr. and Mrs. Wyrick attended a reception at the Corbin Public Library with the Friends of the Library following the Kiwanis meeting. Wyrick was honored with several special awards as well as the key to the city for helping the library resolve a matter during a 2016-2017 conflict.

Wyrick feels fortunate to have grown up in Corbin. As much as Wyrick is passionate about education and libraries, so too is he about a small town, Sunday schoolteachers, English teachers and pick-up games of basketball.

This article was provided to The Jessamine Journal on behalf of The Times Tribune in Corbin, Ky.

From staff reports Democrats will have three candidates to choose from in Jessamine County’s sixth district race for magistrate on... read more