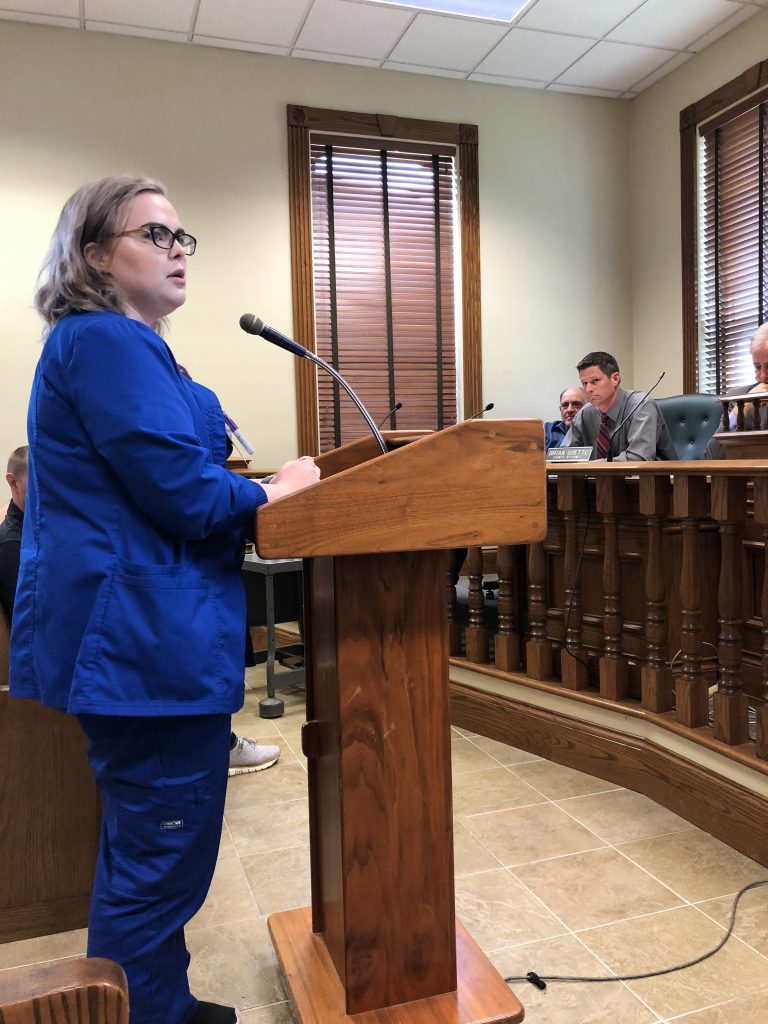 The Jessamine County Fiscal Court previously voted on May 1 not to reappoint a member of the board of adjustments after rumors about his personal character surfaced.

“I don’t have any problem with them voting me off for a reason but for false statements and slander against my name and character, none of the four did any checking on it,” Slugantz said.

Slugantz alleges three of the four magistrates confirmed they talked before the May 1 meeting, when the decision was made not to reinstate him as a member of the board of adjustments. A 4-2 vote took place that evening which resulted in Slugantz not receiving re-appointment.

Slugantz said he was later told the decision was made because of rumors he fell asleep at meetings and showed up regularly under the influence of alcohol.

“He isn’t careless. He isn’t lazy and he certainly is not a drunk,” Molly Slugantz stated when she addressed the court about the rumors circulating her fathers reputation. “He is a modest and honorable man who does not deserve to have his name dragged through the mud for any reason what so ever. We are here because the four of you who voted against my father allegedly gathered illegally and discussed those accusations before the meeting.”

Under county government law in Kentucky, the fiscal court is subject to the provisions of the open meetings law, which states a meeting of a quorum (a majority of the court’s magistrates) at which any public business is being discussed shall be a public meeting, except when discussions or hearings might lead to the dismissal of an individual.

In those cases, a meeting can be held, but only without restricting that individual’s right to a public hearing. Kentucky law states the basic policy for a public meeting is the simple fact public policy is public business.

Violation of the open meetings law should result in criminal penalty and any member of the public agency who attends the meeting knowing that is is not being held in accordance with the law could be fined.

After an unanimous vote to reinstate him to his position Tuesday night, Slugantz addressed the court and said he believes his work experience put him in a good place to hold his position, and thanked them for their reinstatement.

“I do want to address something that I have heard,” he said. “A couple weeks ago there were some false statements made about my name and I just want to let everyone on the board here know that none of that is true. I will like to ask that anytime in the future when an allegation is brought up about anybody that is being reappointed for any board member position of any board, that you all would want to investigate those matters before you act on them. You might want to reach out to the other board members of the board that they are serving on, or the board’s attorney.”

Magistrate Tim Vaughn also addressed the fiscal court at Tuesday night’s meeting, stating his wife brought up an important point in their discussion the night before. She asked him to consider what the right thing to do would be when making the decision to reinstate Slugantz to his position.

Vaughn said he did some research, and realized Slugantz’s expertise is extremely valuable to what the board of adjustments does in Jessamine County.

“From phone calls and people that I have talked to,” Vaughn said. “They have high regard of this person on a personal level and a professional level.”

For Molly Slugantz, she told the court how saddened she was members allegedly believed the rumors and voted against her father instead of investigating the accusations further.

“Not only does this harm your credibility as leaders of my community but it harms your character as well,” she said. “We are here because we will not tolerate this kind of immaturity within our county. I am aware that one of you had the courage to apologize to my father, and for that, I thank you. I wish that your peers were as accountable for their actions as you were.

“Not only has this situation opened my eyes to how corrupt a county government can be, but it has also harmed the integrity of the court in front of me.”

Judge-Executive David West said he was not privy to any information prior to the meeting on May 1.

“I think it came to light that maybe there was some reasons to reconsider and I was more than happy to put him up for reconsideration,” West said. “I am happy he is now with the board. As far as any discussions of any type, I didn’t have any knowledge.”