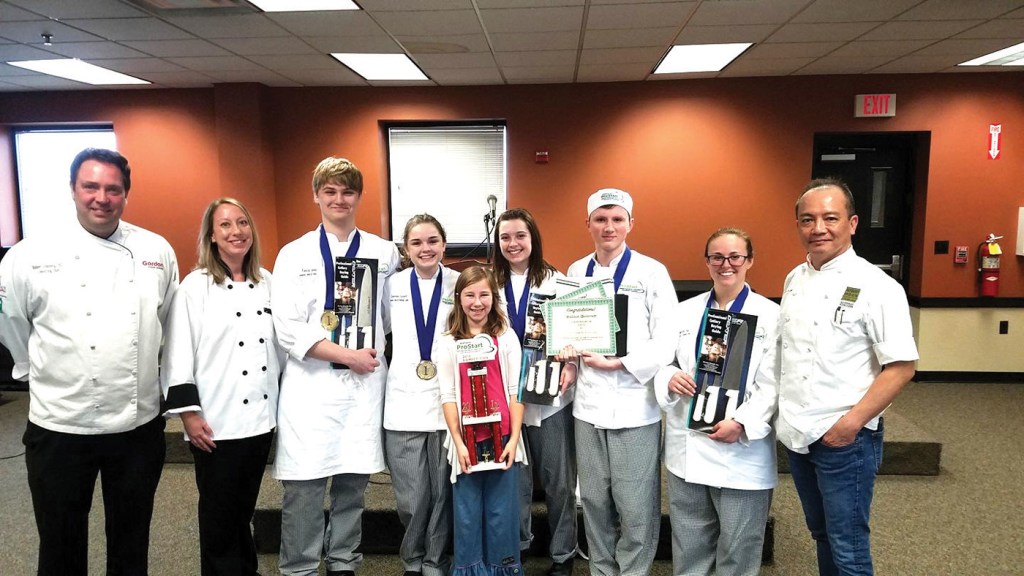 Jessamine Career and Technology Center’s Culinary Team recently won the state competition and flew to Providence, Rhode Island, last weekend where they will compete against over 50 teams in the nation, including some international groups as well.

Competing against only five teams at the state competition earlier this year, the students have been working since October writing, practicing and perfecting their three-course menu.

“The competition requires that the students write a three-course recipe and menu,” JCTC culinary teacher Elizabeth Crump said. “Once they have created the menu, they must divide the tasks and prepare the meal in one-hour without the aid of any electricity. The only heat source is two butane fueled burners. They must also price and inventory each item using culinary math strategies.”

Crump said students who participate in the culinary course at JCTC will leave with essential culinary knowledge to prepare nutritious and inventive meals for their family in an industry setting. Also, they will leave the program with a better understanding of what work ethic is all about.

“Culinary focuses heavily on soft skills,” Crump said. “They have learned to communicate with guests and fellow team members. They learn the value of personal responsibility and pride in what they have accomplished in the lab and through catering events. Vocational education feeds our business and industry. The culinary field is a huge part of that industry in our community and Central Kentucky. These kids now have skills and a trade to carry them into future career success.”

Teaching for over 12 years, Crump said her background is in the culinary field. Working mainly in banquets, catering, and pastries, Crump also has a family and consumer science degree from University of Kentucky, as well as a masters in teacher leadership from Eastern Kentucky University.

Kentucky, Crump said, has never placed in the top 40 at the national completion and she would love to see the students from JCTC make the top 20. Possibly, she said, even the top 10 of all culinary teams in the nation.

“My hope is that they all learn from the experience, make great contacts and cook to the best of their ability,” Crump said.

Throughout her three years teaching for Jessamine County Schools, she said she has seen several students leave pursuing careers in culinary education or working in a career in the food industry.

“Mrs. York has had many success stories of students working in the industry doing amazing things. I am beyond proud. I have never had a team put in the amount of practice this team has.”