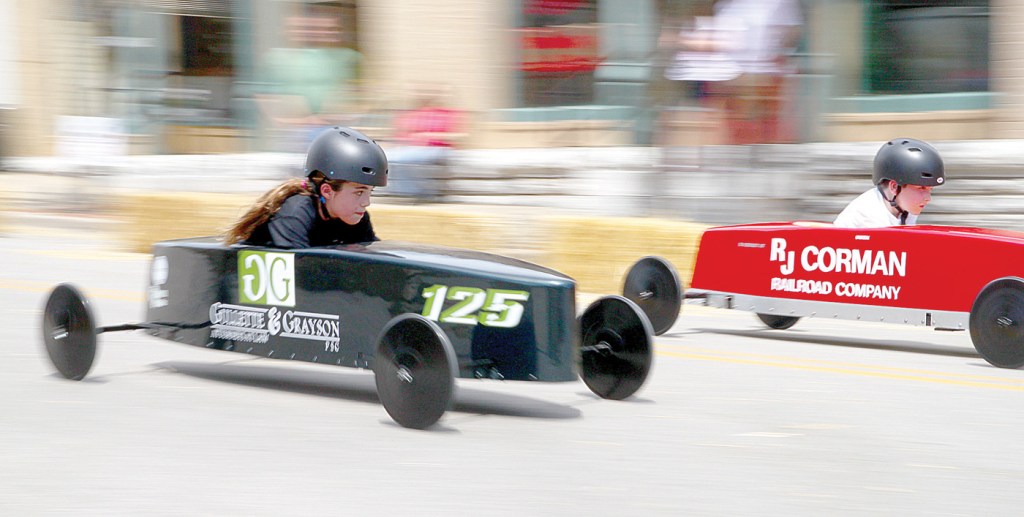 As a throwback to the pre-electronic era, Wilmore will host an event offering children who have never seen coaster car racing, and adults who remember their own racing experience, a chance to step back in time as the crowd cheers on kids next weekend during its fourth annual Coaster Car Derby.

Registration is scheduled to begin at 9:30 a.m. Saturday, April 28, with the checkered flag dropping at 11 a.m. on East Main Street. Participants must be between 7 and 17 years old. In the event of rain, the derby will be postponed until May 12. Registration forms and participation waiver forms can be downloaded at www.wilmore.org, or picked up at Wilmore City Hall, located at 335 E. Main St.

Last year, the event was renamed “The Jim Edd Shearer Memorial Coaster Car Derby” in memory of the late local Wilmore businessman who had previously helped sponsor the event.

“In 2017, we added ‘The Jim Edd Shearer’ to the title,” Judy Woolums, a member of the Wilmore Community Development Board, said. “The late Mr. Shearer was a sponsor each year and an enthusiastic supporter of this event.”

Woolums said coaster cars made a resurgence in Jessamine County several years ago, even before the race began.

“Locally, the return of coaster car racing took place in Nicholasville perhaps six years or so ago,” she’s said. “One of the volunteers, Rob Gullette, approached Wilmore about having a second event here. Sort of the start of a coaster car derby circuit. The city council approved it and we started in 2015. Unfortunately, the event in Nicholasville has been discontinued for the time being. I’m not aware of any other coaster car racing events in Central Kentucky.”

“Adults are also drawn back to the ‘Spanky and Our Gang’ children’s series and their homemade coaster cars,” Woolums said. Woolums said various Wilmore restaurants will be open and a kettle corn vendor will be open for the race.

Woolums also said attendance has grown throughout the years since the event first started, and the word has spread making the event a popular experience for many to attend.

One memorable year, Woolums said the derby had two homemade cars racing in their own category.

“That was so funny,” Woolums said. “However, due to safety issues, the homemade car division has been discontinued. We also give trophies for first-place, runner-up and semi-finalist. We have given out T-shirts to all participants in previous years, but (I am) not sure on this yet for this year.”

For those who wish to come to downtown Wilmore, Woolums said there are benches along East Main Street. Or, Woolums suggested viewers can also bring their portable event chairs and set them up on the sidewalk to watch the children race through downtown.

“There is no fee to watch or to participate,” Woolums said. “There are (also) children’s events taking place at The Family Center which relate to racing. Our local police will be doing radar checks on the speeds of the cars which is always fun to hear. County Judge-Executive David West will emcee the event, and our downtown shops will be open as well.”