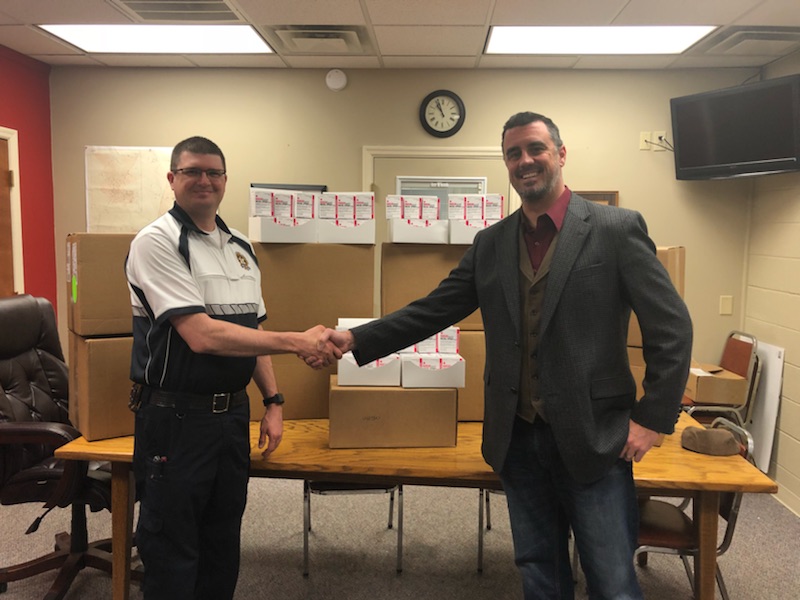 John McDaniel, pharmacist and owner of Sims Drugs in Wilmore, recently applied for a grant through Cardinal Health, which resulted in Jessamine County Emergency Management System being awarded almost $70,000 in Narcan, a reverse opioid agent, to be used in the fight against the opioid crisis in Jessamine County.

“Six months ago, a Cardinal representative called me,” McDaniel said. “They said there is a grant offering a couple million to provide nasal Narcan. The EMS in Jessamine County has purchased mostly from me for about six years. I talked to the chief, and also talked to the police departments and county sheriff’s office. Some said they didn’t want to fool with it.”

McDaniel said he asked to apply for the grant on their behalf. Along with Assistant Chief Chris Wilhite for Jessamine County EMS, McDaniel filled out an application and was approved.

Earlier this month, they received their shipment of nasal Narcan, which they hoped to have out on the trucks late last week.

“As part of the frontline response to the opioid crisis, first responders know the importance of Narcan in helping reverse overdoses and save lives,” Wilhite said. “(The) donation from Cardinal Health will help Jessamine County EMS crews save lives while easing budgetary pressures on our department.”

McDaniel said with the nasal form of Narcan, the onset takes a little longer to work than the injectable. However, Wilhite said his deputies would feel more comfortable using the nasal spray as opposed to the injectable version.

“It is a safer product,” Wilhite said. “Most times you have someone and you give them the Narcan and it reverses the overdose and they become aggressive. If there is a needle flying around, someone can get stuck by it. With this, you just shoot it in their nose.”

Although the nasal spray has been available in the state, and can even be acquired without a prescription, Wilhite said this is the first time Jessamine County EMS will be using the product.

“You can buy the product yourself and use it,” Wilhite said. “But if I was to use it before now it was not approved.”

McDaniel said there is no bias to the opioid crisis and addiction. When it is about your loved one, McDaniel said it becomes personal.

“If it is someone you love and it takes five overdoses to finally realize and be committed to rehab and be committed to overcoming, do you only want them to be addressed that fourth time?” McDaniel said. “If it takes five overdoses, you want them to be able to be saved five times. I have been here 11 years and I know the people that overdosed and died. I have watched where people have overdosed and not died, but they have had strokes and had to be put on Medicaid and admitted to a long-term care facility. There is a cost with this, but it is worth it in the long run to do this.

“When it is in the news and it is someone else, it is one thing, but when it is your loved one, it is something else.”