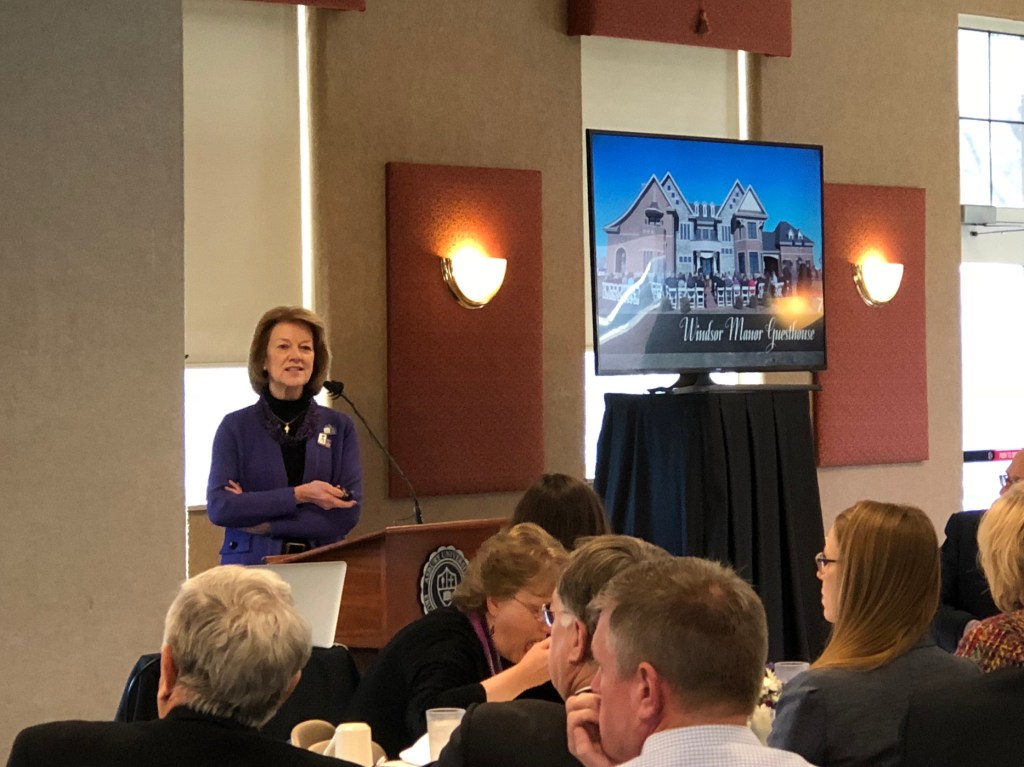 Asbury University held its annual president’s breakfast March 22, where members of the Jessamine County Chamber of Commerce attended to mingle and listen to university speakers, gaining a deeper knowledge of what the university brings to its surrounding community.

“We want to get to know more about you,” Asbury President Dr. Sandra Grey said. “I want to thank you for your service and leadership in the community because we really are a community. We are a community woven together. All that you bring and all that we are trying to do is really what serves to make this a great place for us to live.”

Gray shared with the crowd the university has raised $55 million of its $62 million goal with its Ignite Campaign. In hopes to move the mission of Asbury University along, Grey said the plan is not to wait until the full amount is raised to deploy assets, the university is doing so as they strive to reach its goal.

“I feel like we have been running a baseball diamond,” Grey said. “We got to first, second and third base and now we are between third and home. We are trying to come in and bring it home and finish it out.”

Grey said the university is dedicated to investing in Jessamine County. Over 80 percent of graduated students go directly into full-time jobs in the workforce after graduation, with over 99 percent of students who leave the university receiving placement in some form even if they receive work in overseas missionaries.

Grey said 50 percent of students who attend the university come from out of state, with 16 percent of those students choosing to stay in Jessamine County after graduation. Recently this fall, tuition at the university was the largest it has ever been with 1,956 students in attendance.

“We have been working hard to get to 2,000,” Grey said. “We love seeing an increase in our students. One thing we have worked hard at is increasing diversity on our campus. We want to look like the nation does. Over 17 percent of students are from racial and ethnic diversity and that makes for such a rich campus. We have students from 43 states and 21 countries. That enriches the life of our students.”

One way in which Asbury University recently enriched the lives of its students, is by sending a number of them to be correspondents for the 2018 Winter Olympics.  Jim Owens from Asbury accompanied a team overseas who learned many different facets of journalism and what it takes to report and film the Olympic games.

“We have 30 students who traveled to Korea to work as part of paid broadcast professional crew covering the Olympics,” Owens said. “We trained 2,000 students in Rio with 1,200 successfully completing and getting hired. In Korea 1,000 students successfully completed and 720 were hired to work at the games. In return they allow us to bring students to work with that crew. They cover flights, hotels, everything is covered, which turns it into an incredible experience for these students.”

Two of the students who traveled overseas earlier this year where in attendance at the breakfast. Sarah Owens from Wilmore was part of the team, as well as Aaron Kim from South Korea who is attending Asbury University as a student and was able to go home as part of the experience.

“We watched opening ceremonies with a group of people from Brazil, Korea and Russia,” Owens said. “We are all interacting and getting to know each other’s culture. It was a great experience and I am glad I got to go.”

For Kim, being able to be a part of the Olympic games was something special as he said he remembered hearing about the 1988 Olympic games which also took place in Korea.

“I heard about the 1988 Olympic games back in school in Korea,” Kim said. “It was a historic event where big companies like Samsung, LG and Kia were first introduced. To be a part of another game held in my home county was an amazing experience for me. Coming back to Asbury was definitely a different gear shift, but I was excited to share my experience and bring back what I have learned to this community. I really appreciate Asbury University and everyone that supports Asbury University to allow me to take this opportunity.”