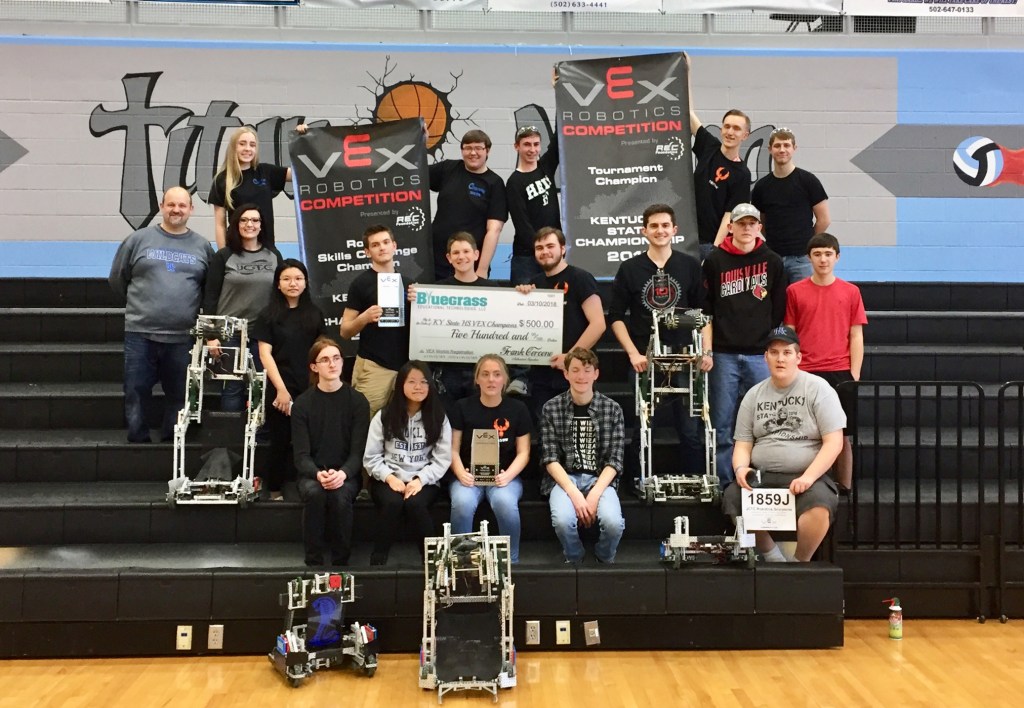 Preparing for the event since April of last year, students have been working to perfect their design process, working almost every single day after school and some weekends. VEX Robotics Coach Meghan Banks said some students even staying at Jessamine County Career and Technology Center after 9 p.m. making adjustments and editing their programs.

“There is a multitude of reasons to be proud of not only each team but each individual team member,” Banks said. “These students are not only brilliant, they also have a work ethic that demands respect. Most of our students have more determination in their big toe than many folks have in their entire body.”

Banks said that each team has a different set of skills and strengths which set them apart from each other.

“They also have varying degrees of experience,” Banks said. “1859X is the most experienced and comes in to practice almost every day since the school year began.  They are strong in programming, building, and driving.  1859W is the most well-rounded team but doesn’t carry as much experience as X.  They spend an exceptional amount of time programming and driving as well as record keeping in their engineering notebooks.

“They also have dedicated team members that scout potential alliance partners as well as opponents.  1859S are great at programming, driving, and performing under extreme amounts of pressure.  They are a solid team with experience. 1859X and 1859W have similar bots in design whereas 1859S has a unique cone manipulator.

“The 1859H and 1859J are both new teams that are still learning about VEX and how to achieve their goals at competitions.  They are relatively small teams that will continue to grow and add components to take the next step in competing at the world level. We are extremely proud of each team and relish in their uniqueness and success.”

The biggest accomplishment for the teams so far have been earning second, third and fourth place in skills at the state competition. Although Banks said winning state and runner-up at state comes in a close second.

“However, winning state does not compare you to other teams in the world,” Banks said. “Having three teams this high in the skills rankings really is setting Jessamine County apart from the rest of our competition, along with the Elizabethtown teams. Outside of specific accomplishments, we are most proud of their ability to learn the value of work ethic, accountability, and self-drive.”

Banks said students develop a passion and love coming in on a daily basis and working towards being the best in robotics.

“I was one of the very first students to join our VEX robotics program,” Drew Bender said. “Seeing the amount the program has grown in only three years is incredible. When we started we had no clue what we were doing, but we learned so much at every tournament although no one knew our team name or who we were.”

Winning the tournament was what Jon Alverson said was one of the best things that has ever happened in his life.

“Going to the tournament we were excited to go and expected to do good,” Alverson said. “Throughout the day we did great and in the end, we won the tournament.  I’ve only been in VEX for one year but I have seen how this team has grown and worked well together to get to where we are today, state champions.  I am glad I joined VEX because I have learned a lot in this last year.  I can’t wait to see what our team has to offer in these next years.”