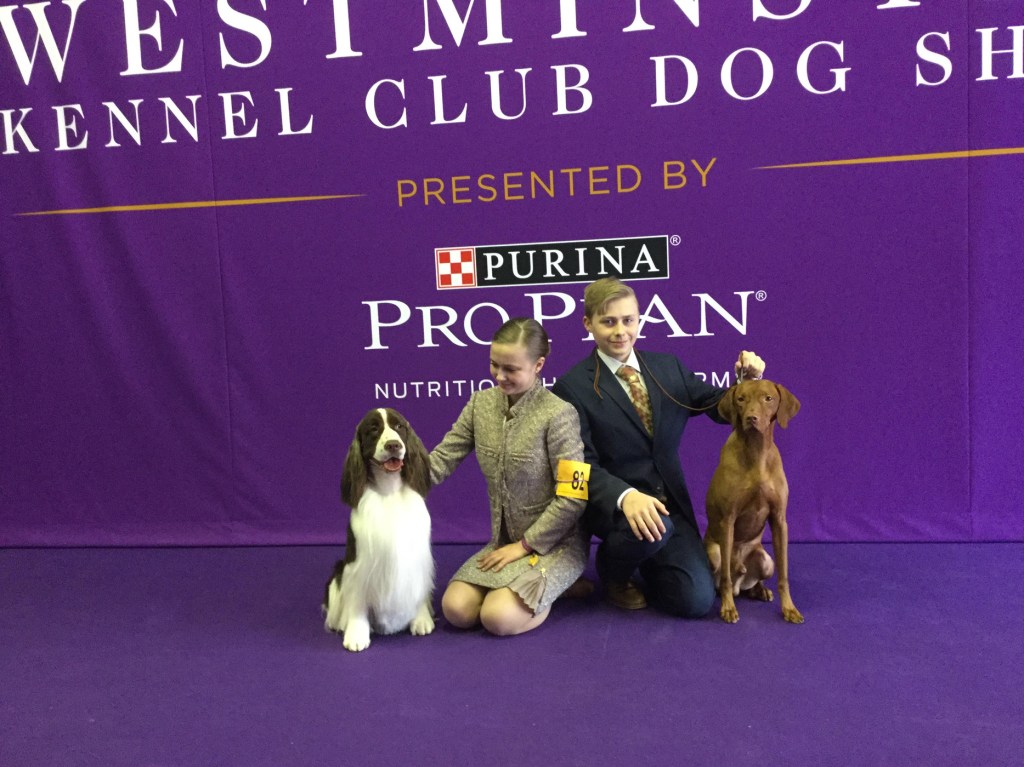 Rachel and Alec Clark had no idea their passion for dogs would take them to New York City for the 2018 Westminster Dog Show.

Since 1934, the Westminster Kennel Club has honored the Best Junior Handler, and the finals, which are held in Madison Square Garden, feature eight youngsters who stood out from among the 100 handlers who traveled to New York.

Rachel, 17, and Alec, 15, of Nicholasville, qualified for the Junior Showmanship competition, which was Feb. 12 and 13.

The brother and sister pair didn’t leave New York victorious, but they did come away with a memorable experience.

“It was such an honor to qualify and get that invitation to Westminster in the mail and I couldn’t be more pleased with Zenith [her dog], and our performance in the ring,” Rachel said.

The competition was extra special for Rachel because she has a hearing disability that makes it difficult to hear talking over background noise.

Alec summed up the experienced by likening it to two American sports classics.

“The Westminster Dog Show is like the Super Bowl and the Kentucky Derby all rolled into one,” Alec said. “The competition is intense and the dogs are perfectly groomed. But there are bright lights, television cameras everywhere and everyone is dressed in their Westminster suits.”

Last season, the brother and sister pair placed in the top five overall in the country by the American Kennel Club Junior Recognition Program.

Rachel’s older sister, Averi, said dogs, much less the Westminster Kennel Club, weren’t on their radar at all.

“We didn’t plan to show dogs and had never been to a dog show,” Averi said. “We didn’t even have a purebred or registered dog and we had never watched Westminster on television.”

Averi, Rachel and Alec’s mother, Erika Clark, said dogs weren’t even the animal she had in mind.

“I grew up in horses,” Erika said, “and I thought my kids would do the same.”

However, Averi wanted a puppy and Erika eventually found a basset hound in grave need of a foster home.

“When Max the basset hound came to us, he escaped when the person dropping him off tried to leave,” Averi said.

And that was only the beginning of the journey for the Clarks and Max. Max was shy and lived under the dining room table.

Erika said he ate there, slept there, went to the bathroom there, cowered when touched and peed when someone made eye contact with him.

When Erika finally signed Max up for a training class with 4-H, her daughter Averi, who wanted the puppy, was unable to take Max, so Rachel agreed to do the honors.

That first class was a disaster, Rachel said. But Rachel and Max formed a bond.

“Maybe they both bonded in their panic,” Erika said.

Regardless, Max began to exhibit signs of positive change at home. From that point on, things were never the same.

“To our surprise,” Erika said, “Max and Rachel passed the little test at the end of the class and graduated to the second level.”

The 4-H group hosted a small dog show and Rachel and Max placed second in their class.

“We couldn’t believe he [Max] let the judge approach him, let alone touch him,” Erika said. “I couldn’t believe Rachel was even willing to go in the ring and was demonstrating that much independence for the first time.”

However, Max was paranoid of the crate he had to be in. Rachel, believing Max was capable, bought a crate so large she and Max could fit inside. She sat in the crate, did her homework there and even ate in it.

Eventually, Max was comfortable enough to join Rachel in the crate. Soon, Rachel said he was able to relax in the crate alone.

At the 2013 Kentucky 4-H State Fair Dog Show, Rachel and Max won their age group, then their class and finally best junior handler.

Most people mistook Rachel as shy when she was younger. Rachel could read lips, but she had difficulty filling in the gaps when her skills lacked. She even began learning sign language but had trouble using it because her friends didn’t understand it. As a result, she was being fitted for an assisted listening device.

But from training and competing with Max, Rachel had improved by leaps and bounds so much so that the doctors said she no longer needed an assisted listening device.

“I told them that she was so busy trying to help Max that she forgot to fall apart,” Rachel’s mother Erika said.

Juliet Robertson, the volunteer 4-H showmanship judge at the Kentucky State Fair, invited Rachel and her family to an American Kennel Club Dog Show at the Kentucky Horse Park.

The Clark family, along with some of their friends, went to the show and were amazed on multiple levels.

Erika said the breeders were friendly and answered every question.

“We just couldn’t believe how kind people were and how willing they were to share with newcomers who were perfect strangers,” Erika said.

When the dog show at Keeneland came back for 2014, Rachel, Avery and Alec were all competing.

Max’s new and official name for competing was changed to Chickadees Max A Million so Alec could compete in junior showmanship. Rachel began showing a beagle, Mar-Lee Larkin Rockstar (Rocky), and Averi had an Aussie that she started showing.

Rachel, despite all the hardships she had as a child, has never worn assisted listening devices. She even gave up learning sign language. Most people can’t even notice she has a disability.

This past fall, the three Clark children have started their very own grooming shop for dogs.

“Just like others have shared their time, knowledge and their dogs with them, Averi, Rachel and Alec share their time and dogs with others,” their 4-H leader said.

Erika expressed the desire for her children to share their passion with others.

“I hope that newcomers and spectators also find us as welcoming and helpful as those we met at our first show,” Erika said.

‘More than just a crown’