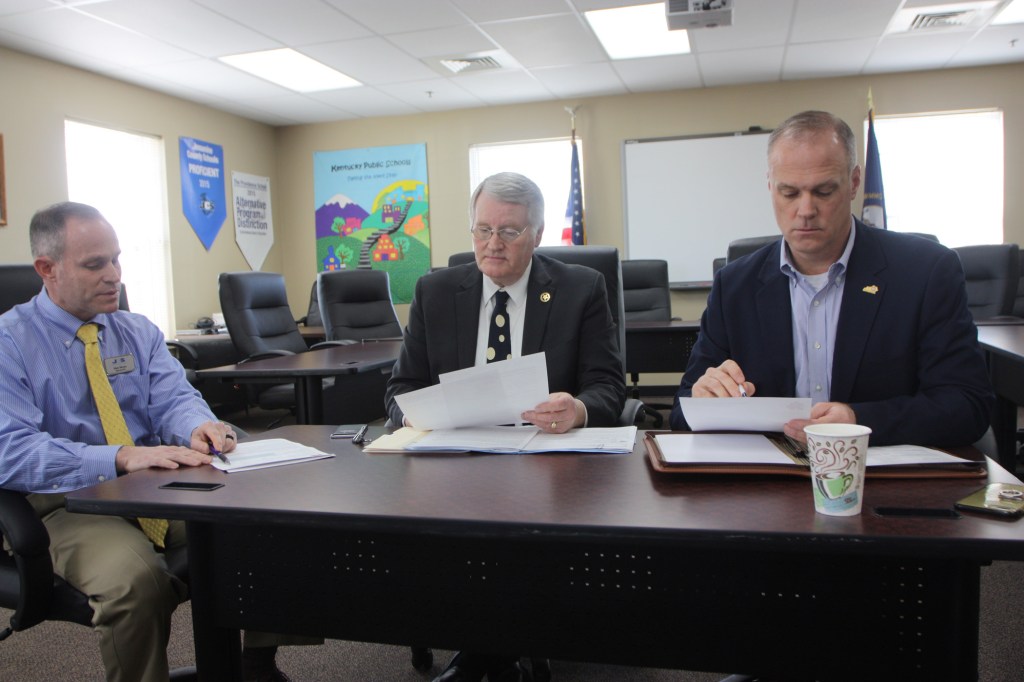 “We are capturing some of the costs we believe will be added to JCS for the next school year,” Moore said. “Jessamine County has looked (this year) for every opportunity to make any cuts that are outside of the classroom and that reflects the number that we have come up with. We are trying to be very lean. That is our efficiency. Some of that has been operating differently and some has been reducing some staff. But again that has not impacted anything in the classroom as of yet.”

The total reductions which would be impacted by the bill would amount to $3.17 million, with most of the reductions falling into the recurring category and not one-time reductions. Moore said transportation would see the biggest impact next year with a $1.5 million reduction.

“That puts us in a really tough situation because almost all of this money goes into staffing so we don’t even have enough with this money to maintain our current staff,” Moore said. “Once they go through the program, they get their CDL and are now eligible for higher-paying jobs. We are trying to keep that staffing.”

Moore said some programs will go away because of reductions, such as Adult Agriculture. Although JCS cut staffing by 4 percent in recent years, this year it restored 2 percent of those cuts and would like to bring the other 2 percent back as well, Moore said.

“The board raised taxes as high as they could which raised controversy,” Moore said. “I made the recommendation and we stretched ourselves out there. We added raises for staff to get their step increase. If you look at us with surrounding districts we are competing with, I feel we need to offer those raises. We have had three years that we have not provided a raise.”

Meyer said he and Buford have been in contact with Moore and have been very involved since day one wanting to come to Jessamine County to show their support and answer as many questions as possible.

“We want to hear from you all,” Meyer said. “We know the impact in our school system and we know how it impacts public education across the state.”

Buford stated he will not vote in favor of SB1 and did not see it making it through the House.

“On the new pension issue, changes have been made,” Buford said. “I don’t like them. I do not think that they have gone far enough and it has problems. I don’t think that the battle is over yet. I think it is over in the Senate and it will pass in the Senate, but when it goes to the House it will run into a big problem down there. Leave the teachers alone and come deal with the Kentucky employee system because that is where we are only 13 percent funded. That is the big issue. We need to put our efforts there.”

Buford suggested a luxury tax, capping the number of appointees in Frankfort, reviewing all current corporate tax breaks, as well as applying sunset clauses when doing tax breaks and a special lottery program just for pensions such as adding a game for the lottery that goes directly to the pension.

“I don’t know how you can encourage new teachers to come into a system knowing that you are not going to get Social Security,” Buford said. “Now, I will admit when you are 20 years old you are not thinking of being 65; you are thinking of getting a paycheck and getting a nicer car or a nice apartment. But someone has got to think about them and that should be these people right down here in Frankfort in the general assembly.

“If you think that we have problems now, think about when they start turning 65. There is no favor over there for this bill to pass from my understanding. Even if we do pass this bill, it will not have any effect on this year’s budget.  We will not start to see any gains for 12 years with doing this so we still need tax reform without a doubt.”