Asbury at the Olympics 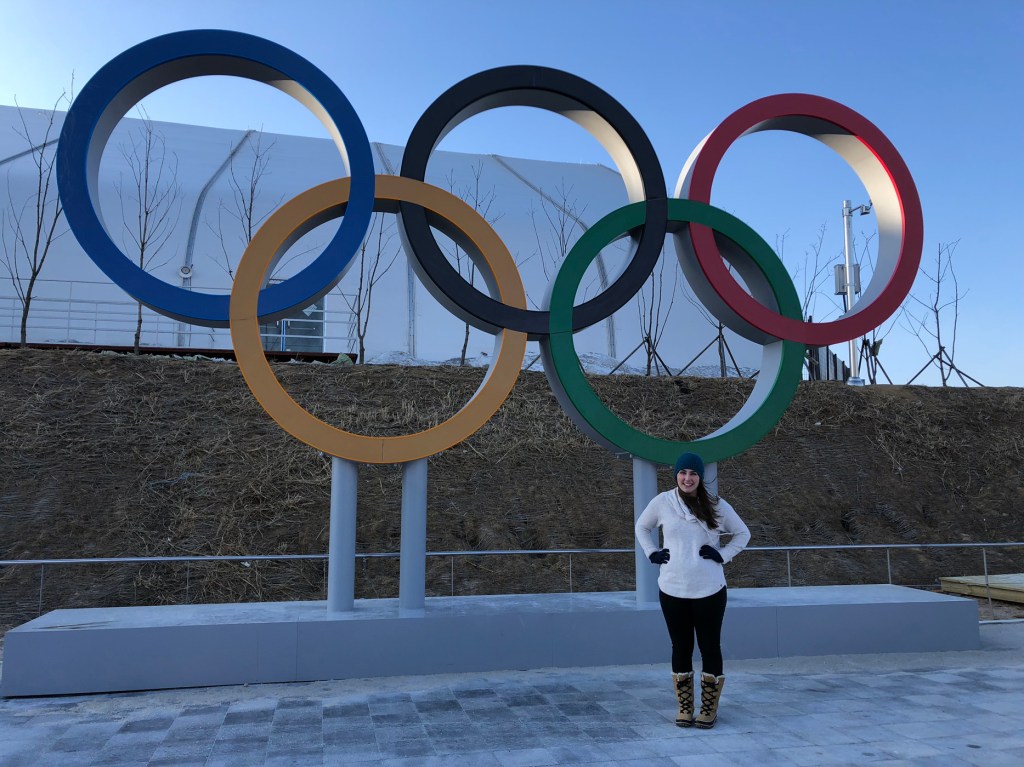 Asbury University students have  been paid to work in the television coverage of a dozen-straight Olympics. It’s a unique opportunity that Asbury offers, giving media and journalism students real-life experience at one of the biggest sporting events in the world. The Journal asked one of the students, senior Hannah Saxe, if she could report what it has been like at the 2018 Olympic Games during her time in South Korea.

Hello from PyeongChang, South Korea! I’m one of the more than 30 Asbury University students working in various capacities in media at the 2018 Olympic Games.

The Games officially started on Feb. 9, but we arrived in South Korea a few days earlier. After a 15-hour plane ride, we were told this was going to be the coldest Olympic Games ever. Luckily it hasn’t been quite as bad as we were expecting, but there have been a few days that lived up to all the hype. At outdoor venues, we are dressed in our warmest hats, snow boots, snow pants and coats.

When you’re writing, running cables, or working cameras it’s not easy to wear gloves so our hands are probably colder than anything else. Hand warmers have been our best friends providing a little extra heat while out in the mountain cold.

It has been an incredible opportunity to meet so many people from all around the world. Each venue has different journalists, which has given us the opportunity to experience many different cultures in a short amount of time. One day, at one venue alone, I met someone from Great Britain, Ireland, Portugal and Switzerland.

Though Asbury students are constantly traveling around the world on cross-cultural trips, this has been my first time going to an Asian country. It has been exciting to learn about the culture of Korea firsthand. We have had the chance to work with many  Koreans and have had the opportunity to learn from them about what typical Korean culture is. It has been fun to sit and compare the similarities and differences between Korean life and our experiences in the United States.

The food here is incredible! Everything has a lot of spices and strong flavors but tastes amazing. One of the typical Korean dishes is topokki, which consists of small rice cakes in a spicy red sauce. You should absolutely try it if you ever get the chance.

While you’re at it, you should also try Korean Barbeque. There are dedicated BBQ restaurants where you order which type of meat you want, and they bring it to you uncooked so that you can cook it in a little skillet in the middle of the table. Not only does it taste incredible with all the side dishes they bring out, but it is an awesome experience on top of it. I wish they would open up a Korean Barbeque restaurant in Nicholasville today!

The only food that took us by surprise was what is provided for breakfast. There are eggs and potatoes available alongside rice, dumplings and salads. This for sure is not what we are used to, but it has been great to try new things.

Asbury students are all staying in different accommodations across the area depending on where they are working, but each place has been very satisfactory.

Some students are staying in small condos that are kind of like small two-bedroom apartments with a little kitchenette and sitting area. These condos have helped the long stay abroad feel a little cozier.

Several of the hotels and places are where the Olympic athletes are staying, which has meant we are running into athletes everywhere — including people like Shaun White, the snowboarding gold medalist. It has been crazy to think that we have gotten to meet so many of the people we usually only see on T.V.

The Olympic program at Asbury is unlike anything else you can find and has been an experience for which I am incredibly grateful. I have learned so much about not only media, but also what it means to work on a worldwide production.

Everyone we have met through this experience has taught us so much, and we cannot believe we have actually been here working at the Olympics. This will be an experience that we carry with us for the rest of our lives and one to tell our grandchildren about someday.

One of the students here with us, senior Lisa Humason, told us that her older sister got to come to the Olympics through Asbury when she was a student, and so it’s been a dream of hers since she was 8-years-old. I suppose her dream, and ours, is coming true.