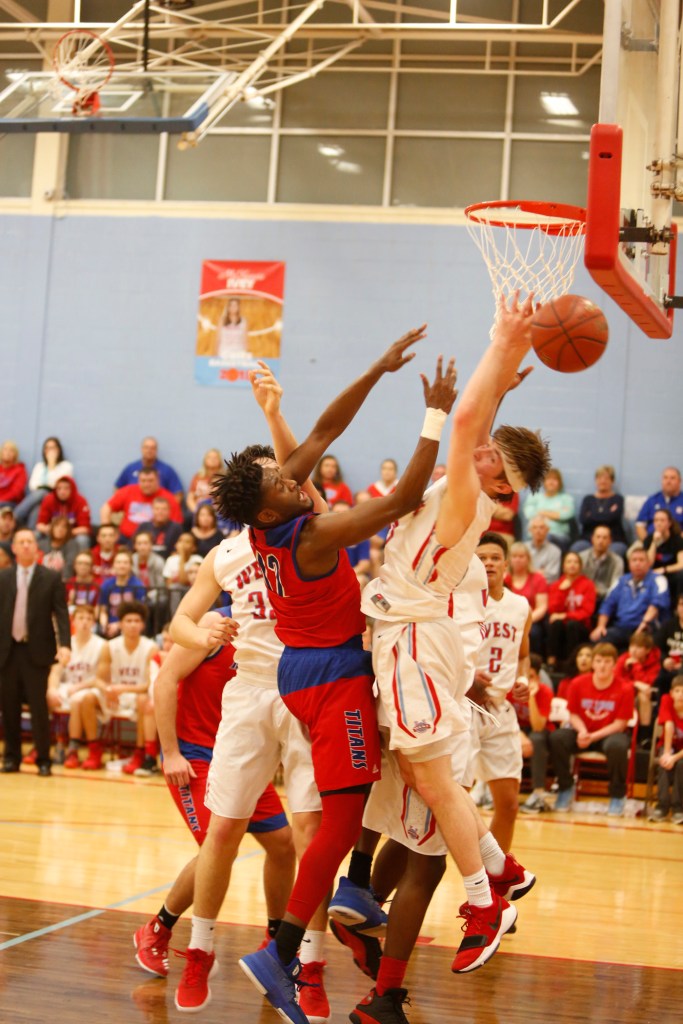 NICHOLASVILLE – The Mercer County boys spent the entire season preparing for big games like this one, and this game will in turn steel them for even bigger games to come.

The Titans fought off West Jessamine for a 73-70 victory Friday night that gave them their fourth consecutive 46th District Tournament championship.

They survived only after West Jessamine eliminated most of the 15-point lead they held with less than two minutes to play, and only after the Colts missed a shot that would have tied the game at the buzzer.

And they survived a difficult game in an electric atmosphere in their opponent’s home gymnasium because they had been in similar sticky situations before, they said.

“We’ve been in these spots before. We know not to panic, just listen to our coach, play as a team and believe in everybody, and that’s what we did,” Mercer forward Gunnar Gillis said.

Trevon Faulkner scored 34 points to lead Mercer (25-5) over West Jessamine (18-10) for the third time this season and for the fourth straight year in the district finals.

“It feels great, but our main focus isn’t district, it’s region,” Faulkner said. “That’s what we want and that’s what our whole community wants.”

Mercer will bid for its second title in three years in the 12th Region Tournament, which opens with first-round games Wednesday and Thursday at Pulaski County.

The Titans had to win one of their most difficult games of the year to gain what they hope will be a more favorable draw for the regional.

“We treated this as a region game,” Hamlin said.

Faulkner missed two free throws at :09, but Mercer had two fouls to give and used them both to take the clock down to 4.8 seconds remaining. West Jessamine got the ball to Dalton Bruner, whose shot from left of the key clanged off the rim as time expired.

“If you’d told me with a minute and a half to go that we were gong to have a shot to tie it, I would have taken that,” West Jessamine coach Damon Kelley said. “We somewhat executed the play I drew up, not perfectly, but we got a look and that’s all you can ask for.”

“We guarded the 3-point line, and they still got a better look than what I was hoping for,” Hamlin said.

Hamlin said the last two minutes were a rougher ride than he would have hoped for, but he said the Titans benefitted from their experience against good competition such as they faced in the King of the Bluegrass, the Cumberland Falls Invitational and several showcase events.

“We missed some free throws, had some turnovers, and give credit to West, they made some shots,” he said. “But that’s why we scheduled the way we scheduled, for an atmosphere like this.

“It was a fun game. That’s what everybody in the state dreams of. In the last minute and a half, the crowd’s standing, the cheerleaders are cheering, the student sections are yelling. That’s Kentucky high school basketball right there.”

“It just helped us get a real regional feel for how it’s going to be. It was crazy,” Gillis said.

Mercer trailed 30-29 at halftime even after Faulkner made three 3-pointers and scored 10 points in the second quarter, but the Titans spread the wealth on offense in the third quarter.

Kaelin Drakeford buried a second-chance 3 to give Mercer the lead for good in the opening seconds of the period and launch a 7-0 run. Carter Baughman hit two 3s and Faulkner hit one in the period, the latter giving the Titans a 54-42 lead.

Hamlin said a switch to a zone defense in the third quarter at the suggestion of his players affected West’s shooters.

“We listened to them, we went zone and it made a difference,” he said.

Gillis scored nine of his 11 points and got a number of key rebounds in the second half for Mercer.

“He played like a warrior tonight, like a man possessed. He was battling for every rebound,” Hamlin said.

A 3-pointer by Ty Divine and consecutive layups by Faulkner and Drakeford gave Mercer its largest lead at 71-56 with 2:11 to play before West Jessamine came roaring back.

Baughman scored 12 points and Drakeford had 11 for Mercer.