A ‘peaceful rest’ at Potter’s Inn 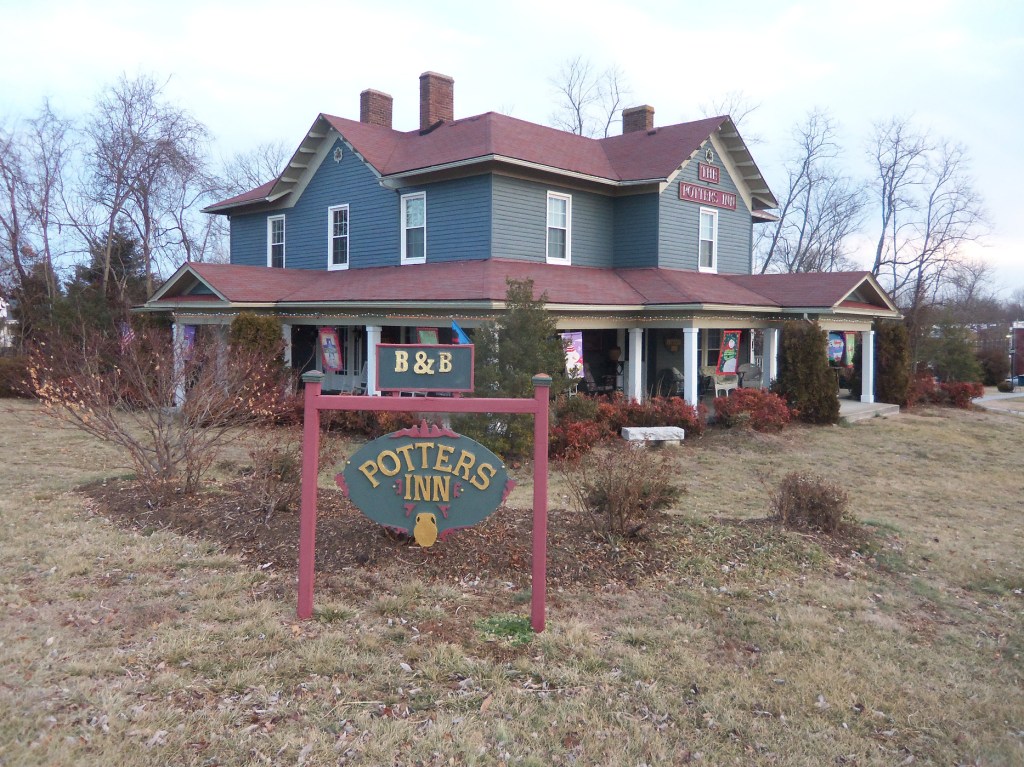 The Potter’s Inn in Wilmore has been home to many things throughout the years, from travelers visiting family and friends to those visiting with plans to experience Keeneland and the Bourbon Trail, innkeeper Julie Jobryce said all who come leave with a unique experience.

“I look over the comments in our guest book and see words like joy, warmth, kindness, faith, testimony, grace, happiness, friendship, home and family,” Jobryce said. “This is what I believe makes for a unique experience at the Potter’s Inn.”

Built in 1988 and formerly known as the Lowery-Walters-Johnson House, Potter’s Inn was moved in 2005 from its original location near the Norfolk-Southern Railroad on land that at one time was a 70.5-acre farm in Wilmore.

When James Lowry married Ruby Leavel in 1921, he had the house enlarged at her request to include 17 bedrooms, as she allegedly told him the house was too small to entertain guests. After Lowery’s death, the house was sold three separate times before Premier Villages came to Wilmore with the intentions to build a retirement community where the house used to sit.

“Fearing the wonderful house would be demolished, the Wilmore City Council asked Rudy Medlock, professor of art at Asbury College, if he and his wife, Pat, would be interested in saving the house if the city would sell them some land,” Jobryce said. “

Rudy had already done several restorations of historic buildings in the area, but this was different in that, besides much restoration, it would also necessitate actually moving the entire house across the street to a new location. The Medlocks were unsure of what they would do with it, but they were sure the Lord had a plan for the once grand home.”

Jobryce said the house was transported in the summer of 2005 to Walters Lane, where it sits today, and by the end of the following summer, all of the renovations were complete.

Jobryce said the shelves in the Potters Inn are filled with pottery, much of which was made by Medlock. In addition to the pottery provided by Medlock, the collection also includes modern pieces and collectibles which have been collected throughout the years and brought to Potter’s Inn.

“Prices of the pottery range from as low as $10 or less up to pieces valued at $150 dollars or more,” Jobryce said.

One-of-a-kind art is also featured throughout the inn, much of which was created by past and present Asbury University faculty. The artwork in the Inn also features artists the Medlocks have met over the years.

“Most of the paintings, sketches, and photography are simply on display,” Jobryce said. “However, the Medlocks are occasionally convinced to let a piece go to someone who would appreciate the work in their own home.”

Jobryce said Potter’s Inn stays busy year round with a variety of guests. She said many are affiliated with Asbury University or Asbury Theological Seminary, and some come for a quiet getaway with friends. Jobryce said since coming to Potter’s Inn eight years ago, many people have walked through the doors from many different places.

“A few years ago, a couple from England spent a week with me,” Jobryce said. “They set up their ‘home’ here in Wilmore and traveled throughout Central Kentucky taking in the sites. It was a terrific surprise when they dropped in the following year on their way to their destination just to say ‘hello.’ This past year, we hosted a principal from Hong Kong who was here with exchange students in Jessamine County for several days. I’ve also hosted guests from South America and Africa.”

Jobryce said in the future, she hopes the inn will continue to be a place where people know they are welcome and they are valued as individuals in God’s Kingdom. The Potter’s Inn is named after the Bible verse Jeremiah 18:2 which states, “Arise and go down to the potter’s house and there I will cause you to hear my words.”

The innkeeper’s greatest desire is people come to the inn to have an experience with God.

“It has always been our goal to have the Potter’s Inn be a place where people are able to come and relax and just ‘be,’” Jobryce said. “The atmosphere is laid back and guests enjoy sharing around the table together. We want people to know that they can come here for a peaceful rest and hope that they will slow down enough to hear a word from the Lord.”

For more information on the Potter’s Inn please visit thepottersinn.com.