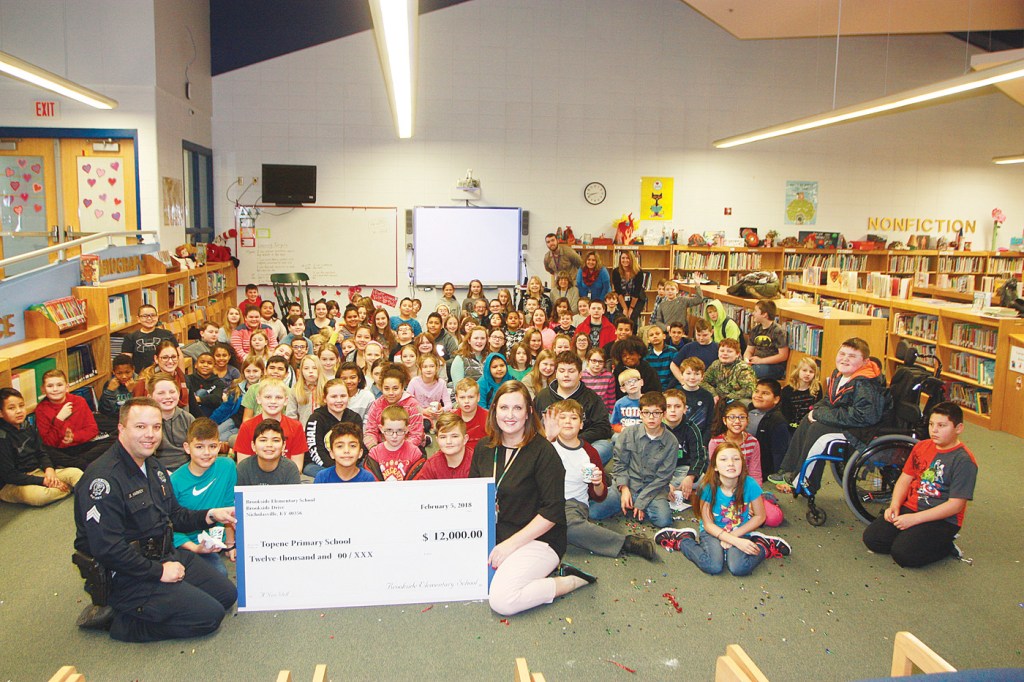 The fifth-grade class at Brookside Elementary received a welcome surprise Wednesday morning with an assembly informing them they had reached their goal and officially raised $12,000 to help build a well in Mozambique, Africa, providing the town with clean drinking water.

Although the assembly was meant to allow students a chance to Facetime with the children at the Topene Primary School, where the well is to be built, a storm prevented them from making a connection and a video was filmed to send the students instead.

“These fifth graders took on a huge project,” Harvey said. “I don’t think they realize the impact they will have on students who are just like them except that they live on the other side of the planet. These Brookside kids learned that they have grown up with clean water simply because of where they were born. The students they are helping will now get to grow up with that same clean water. It’s a life and death difference. Our fifth-graders are difference makers and I am so proud of them. I was honored to simply nudge them over the finish line after they did all the work.”

Brookside Elementary Teacher Rachel Butler said the project started after the fifth-graders read a Scholastic article title “Thirst.” She said the article highlighted a 14-year-old girl’s daily obligation to get clean drinking water for her family.

“The article taught our students about the water crisis in Africa and that 14 percent of African children were dying before age five due to illnesses caused by drinking unclean water,” Butler said. “Our theme as a grade level is ‘kindness’ and at the same time we read this article we were reading a book titled ‘Pay It Forward.’ Our kids thought what better way to ‘pay it forward’ than to get the kids in Mozambique clean water and change their lives.”

Butler said that the fifth-graders went to work on many different fundraisers such as an Entrepreneur Fair and partnered with Remix Education where they rented inflatables for the day where students paid admission which then went to help fund the building of the well. The fifth-graders also held spaghetti dinners and silent auctions throughout the last four months in order to raise the necessary funds.

“It was important first and foremost to get those kids clean water and give them a better quality of life and an opportunity to be healthy,” Butler said. “Although that was our first priority, this project was equally as important for our kids to learn that together they truly can be the change in this world. It’s not just a cliche on a poster, together we can and we did.”

Butler said Mozambique in Africa was chosen due to the fact that a close friend of hers has family there and serves as the link between Brookside Elementary and Topene Primary. She said prior to Wednesday’s assembly, students were able to Facetime with the students in Africa previously when they held their big gym fundraiser.

“Our kids loved talking to those kids although they don’t speak the same languages,” Butler said. “They spoke in kid language, peace signs, showing their muscles and high fives.”

Butler said in the future, she hopes to continue to work with the principal and staff at Brookside Elementary to find more ways in which they can teach these life-long lessons to the children who attend the school.

“Our students, staff, and parents have been incredibly supportive,” Butler said. “They all supported the project, presented ideas on how to raise money and reached out to people they knew. There really aren’t words to express how proud I am of them. I have watched them selflessly work for four months to meet a need for children they will never meet. They have stood in the cold, written letters, spent hundreds of hours rolling change and much more. These kids truly now know that they can do anything they set their minds too and that they are world changers.”