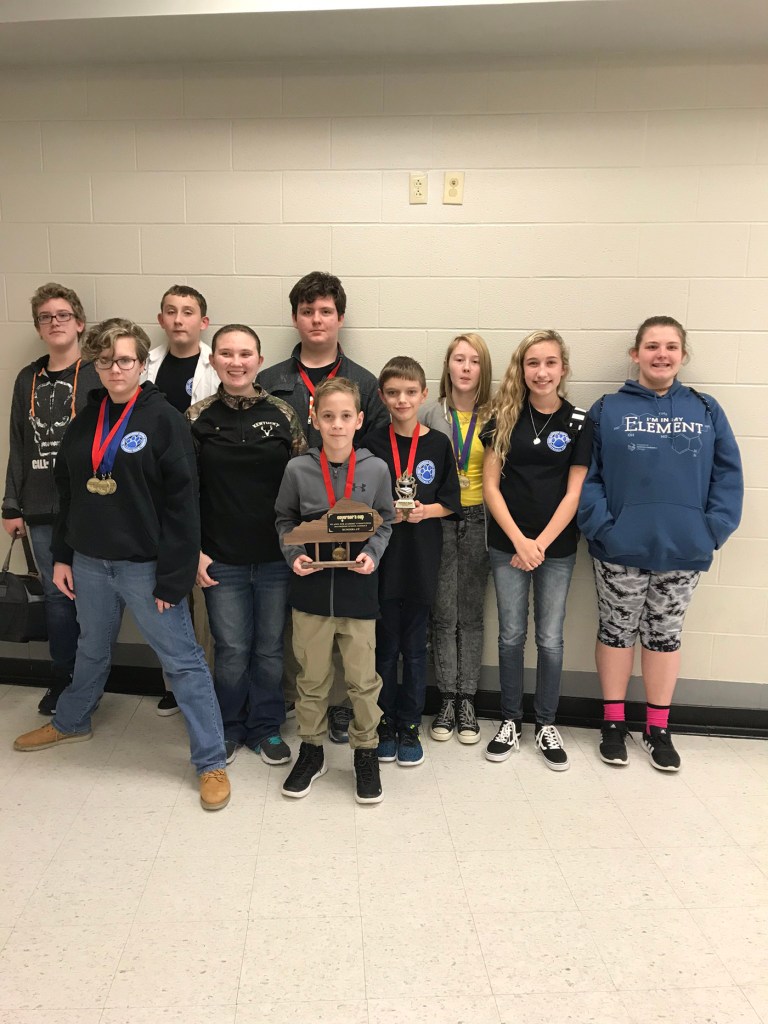 The East Jessamine Middle School academic team performed valiantly in the Regional Governor’s Cup but came up just short of qualifying for state.

The competition was last Saturday at Bate Middle School in Danville.

Kelly Sikorski, coach of the team, music appreciation teacher and director of the preparatory string ensemble, said the goal is to excel as a team and as individuals.

“Our primary goal is to excel in the academic areas that most interest us and to become increasingly curious and well informed through our love of learning.”

He said the team provides a way for students to “focus on the subjects that they most enjoy and really dig into them.”

The team, though centered around academic performance, is a also a great place for students to make friendships.

“Any way you cut it, it is a great group of role models who help and push each other. For some this is their tribe and they find social connections that are every bit as important as enhanced academic progress,” Sikorski said. “My team is very social. Beyond the academics, I think they really like hanging out with one another.”

Team member Brasen Stanley enjoys both the fun and academic aspects of the team.

“I joined the academic team because I thought it would be fun, and it was,” he said. “I also learned many new things from quick recall.”

The EJMS academic team is open to any student at the school, Sikorski said.

“We have some of the best and brightest Jaguars on our team. But not all of our students are necessarily the strongest academically. They enjoy different things.”

Sikorsky said the team offers many different areas for participation. Students can compete in composition or written assessments in arts and humanities, language arts, math, science and social studies. Some students also prefer quick recall, which is similar to Jeopardy but with two teams of four players.

Anna Walters, who placed first in social studies and first in arts and humanities in district, enjoys the extra time for learning.

“It kinda makes you feel smarter. Like a master on current event questions and quick with trivia.”

“Whether we win or lose at competitions, if the students have a positive experience that makes them more curious,” Sikorski said, “if they learn to work better with others, if they discover and develop strengths they didn’t know they had, then the academic team will have been a significant part of their EJMS experience.”